Nothing I can write here can do a better job of taking down the assertion “All Lives Matter” than the brilliant 3 panel comic by Kris Straub. The clear message it fits into three panels of a drawing needs little explaining. Does it? Can anyone refute this?

Yet the response “All Lives Matter”, sounding purely egalitarian, ping-pongs off of the #BlackLivesMatter message so often you can smell it coming. But what happens if you unpack this statement?

It’s not only illogical, it’s an ill logic.

“All Lives Matter”? It’s pretty much on par with declaring, with grand gusto, the obvious color of the sky. Not just an empty statement, it is a threadbare floor cover for something foul in the basement of the soul.

I am in no way intending to speak for #BlackLivesMatter — this is my own interpretation, from what I read, see, hear.

The movement never was offered as #BlackLivesMatterMore or #BlackLivesMatterOverWhiteLives – it never asserts that other hued lives don’t matter. It’s not a mutually exclusive statement of mattering.

It seems simple to me- the way black people are treated by police, by government, by society at large, is as if they do not matter. So #BlackLivesMatter is pretty much “hey wait a minute, our lives do matter” without making any other judgement of other lives. It’s not a competition of some absolute measure of mattering. It’s a statement that their house, structurally no different from other house, is the one in flames. Would you let any neighbors house burn? Would you check their skin color before pulling out the hose?

Now frankly, white people, you/me never have to worry about your life needing reassurance that it matters, because the default is that you do matter. It’s so built-in to the foundation of your house that you never notice it is there. For a refresher on life default settings, white males, see John Scalzi’s insightful Straight White Male: The Lowest Difficulty Setting There Is.

That life setting is so low you do not realize it’s even a setting. You can get the idea that everyone else has the same setting.

I’ve driven my vehicle with a broken headlight/taillight/tags expired and my biggest worry has been on the order of “getting in trouble” e.g. getting pulled over by a cop and handed a ticket. A piece of paper. The idea that I might by shot by a police person when pulled over is not even in the possibility plain… because of the color of my skin. That is a fact.

How more wrong can this be?

The evidence, the statistics on this are so prevalent and stinking obvious. I challenge anyone to convince me the odds of police encounters being lethal for citizens are equivalent for black and white people. Inequities are not a problem if you benefit from them. Tell me how fair that is. Go ahead.

Back to the “All Lives Matter” assertion. When someone responds to a #BlackLivesMatter with a “well I think that all lives matter” this is not even close to what is understood as a constructive way to dialogue by responding with a “Yes, and…” statement.

It’s a flat out “No”, a rejection, a weasel way that tries nicely to tap into what runs deep in the neuroses of those uttering “All Lives Matter”– to refute the #BlackLivesMatter statement. As polite proper people they know better than to be caught saying (in public) #BlackLivesDontMatter but they/we are part of a system that again and again says that.

I will just pull out that ChainSawSuit comic on anyone who bleats out the “but All Lives Matter” line — I saw in twitter a longer version, not sure if it was done by the original artist, but it more or less makes it clear for anyone who cannot figure out the 3 paned version:

But who am I to say? This is where I would pull out a paragraph acknowledging my white privs. All I need to say is this:

I am a white American male.

This “great” country was built upon an economy, a culture, a belief system at the time that actually rationalized the ownership of other human beings as property. This is where lives not mattering is a gross understatement.

Our founding “fathers”? Almost half of them owned slaves. They did not see women as needing the freedoms they proclaimed. Long before they were plotting a revolution on the east coast, out in the Southwest brown people were fighting off European colonists.

At some point in the past, I might have rationalized not being part of the slave owning history by saying, “while this was going on my ancestors were busy being killed and persecuted in Europe.” But it’s not about who’s great great great grandparents were doing what, it’s that our country has this history that will never be erased, nor should it be forgotten or not acknowledged. And as Americans, whether of 8 generations or the first, we are part of this.

Thanks to Catherine Cronin for sharing these very appropriate comments by Christopher Lebron, worth adding later to this post 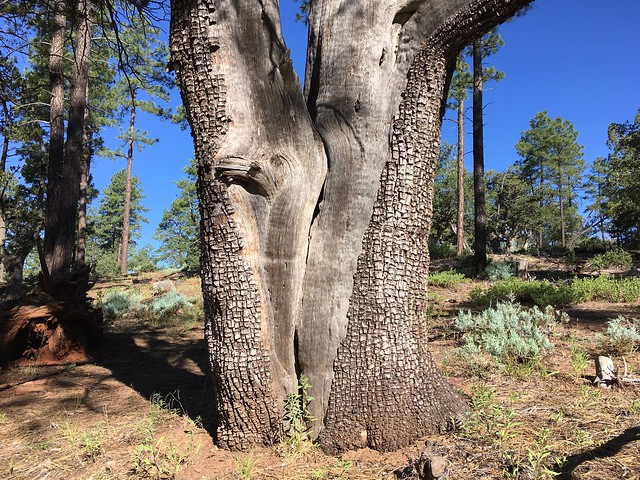 On a recent walk I photographed a mighty juniper tree I have looked at and photographed before. At first glance, it looks like a massive, powerful tree, but with a bit of inspection, you can see how deep the split is in this tree. It goes down into the roots. You cannot “fix” this split, you cannot wrap a bow around it and call it done.

I’ll leave the metaphor completion as an exercise for the reader.

This societal split is most likely not reparable, it’s not going away. Everything this week points to more escalation. What are our potential next presidents are doing? Their strategists are ironing and pleating all the proper sentiments to be uttered earnestly on camera. What are they doing?

As horribly imprecise research (aka using twitter’s advanced search) here’s what I found:

I checked my congressional representations, my Senators. Zero across the board.

Now of course this is no measure of their beliefs, tweeted statements are best taken with salt, but, well, there it is. We are looking to leadership to show us out of this. Who among them is going to do something about this unrest in our country?

Then, heck, who am I to talk? I’m tied with Donald on tag counts. Well until I publish this post. And it’s a puny contribution. But words maybe matter.

I listened twice today to the NPR interview Reflecting On Police Shootings, Author Kwame Alexander Focuses On Next Generation. An author of children’s story, Alexander relayed his being taken back when a child interviewer asked him what kids could do about the tragedies in Baton Rouge, Minnesota, Dallas:

And, of course, that’s not a question a child should ever have to ask. What that says to me is we’ve failed them as the parents, as the adults, as the teachers, as the librarians, as the children’s book authors, as the – you know, the adults in their life. If you’ve got to ask me that question, then we’ve failed you.

What are children learning from adults here?

The world of adults who really believe mal-logic, the ill-logic of statements like “All lives Matter”, can they really change? If there is anything to maybe be hopeful for, it’s that a next generation can be different.

I believe in my heart that words can be the door to a purposeful, possible, powerful life. And this is not just the black kids, Rachel. We’re talking about all the kids because police officers don’t start as adults. They are kids at some point.

And so if we don’t give them books that are mirrors as well as windows, if they aren’t able to see not only themselves, but if they aren’t able to see outside of themselves, then how can you expect them to be able to have something in their mind that allows them to connect with this person who looks different, who lives different than they are? You cannot. I choose to focus on that. And it doesn’t mean I’m oblivious. Again, I’m in tears just like the rest of us. But I’ve got to focus on something that’s uplifting, and it starts with the kids.

Yet we have kids trying to fathom why they are fatherless because their Dad selling CDs was mis-labeled a threat or saw their father killed in a car while cooperatively reaching for his identification. Try telling those kids “All Lives Matter”.

And for the love of anything, do not reach for that “all lives matter” ill-logic. Stop. Remember the houses.

And if only Google really did this…

Top / Featured Image : The utterly brilliant 3 panel comic by Kris Straub from December 8, 2014. It was the one piece that jumped out to me from a long string of relevant content I saw today (after someone retweeted someone else’s mention of this, my poor record keeping as it was on my phone) — in Pride’s It’s Time You Realize #AllLivesMatter Is Racist