We think the developing structure for the Creative Commons Certifications should be more than content and assignment-type activities; that there should be a component of public participating, activity, even encouraging people to be “Defenders of the Commons.”

My own thinking has been influenced by the writings of Mike Caulfield on “choral explanations”. This approach by not only Stack Exchange, but also Quora, and to a similar degree to me, YouTube “how to” videos avoids authoritative “right” answers. Instead, multiple possibilities co-exist, and the community itself surfaces the best ones. But it’s still on an individual to use the answer that speaks the most to them.

We thought that beyond the scope of asking and answering questions in the process of earning a Creative Commons Certification, it might work at a larger scale. The organization deals with a barrage of questions that come via email and other singular channels. It seemed compelling to consider a space where this might happen more publicly, and one of the reasons for the success of Stack Exchange is that it tends to rank high in the results when people search for answers to their questions.

The idea was presented to the organization (I was not at this meeting, but did get notes on the feedback), and while there was positive interest, the suggestion was for us to try it in the scope of the Certification project as a trial. There was concern over the negative environment of the main Stack Overflow community (which we had identified) as well as the proprietary platform.

It was suggested too that we look at a few of the other open source alternative platforms (this too was included as a consideration, but that offered a few more possibilities) and maybe do a feature comparison.

I had my own concerns about how a proposal for a Creative Commons Stack Exchange might overlap with the exiting Law community, which does include legal questions of copyright and licenses. But through a comment on the post syndicated to my blog, I found the Open Source Community which also had a fair amount of activity related to Creative Commons. A proposal for a Creative Commons one would have to explain and justify the unique space for a new community, not to mention building support from within Stack Exchange

Furthermore, the Open Source Community was more than a year into the process of becoming a sanctioned community and they were still in the beta period.

The feedback was reasonable, and stepping back I saw that maybe I was thinking of this the wrong way. 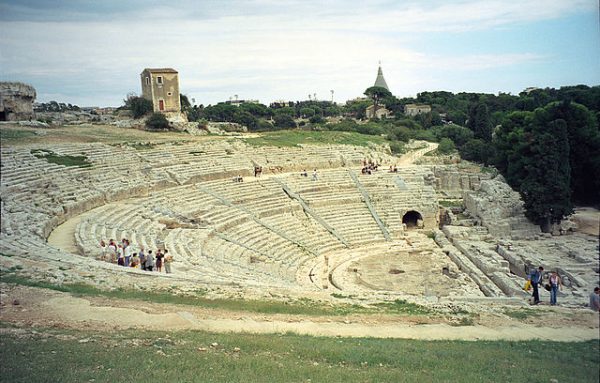 Another Greek Theater in Italy. A Creative Commons BY-SA photo from Wikimedia Commons

I was thinking of one theater.

It is a usual approach for building community for a class, a project- to define a space, an online discussion forum, a recognized place. But that also comes with some overhead of managing the space, and of asking people to devote energy to one space.

How these are framed and satisfied is on the table for the design team. Part of the challenge of the certification design are the wide possibilities of mode, length, format of the ways people might engage in the work to “get certified”.

Even if we do not include the Stack Exchange Communities, it was totally worth the exploration and weighing the issues.

And the choral idea is not left behind at all, if anything, we are thinking of multiple choruses for explanations. Isn’t that the DNA of the internet itself?