I get so much out of the way Mike Caulfield shares his thinking, out loud, in his own blog. His ideas of federated wiki, stream mode, gardens and streams, continue to push my own thinking into unexpected (good) places.

As has his recent piece on choral explanations and OERs. I won’t summarize, that’s on you. Go take a good read.

Last night I spotted the choral approach in what seems now like an obvious example- how to YouTube videos. My google chops are falling short, and it’s not critical, but I remember reading observations that people often go to YouTube, over search engines, when they are trying to figure out how to fix, do, make something.

That’s where I went last night.

Until about two weeks ago, the faucet tightening stopped working. I abhor wasting water, so I put a bucket underneath. 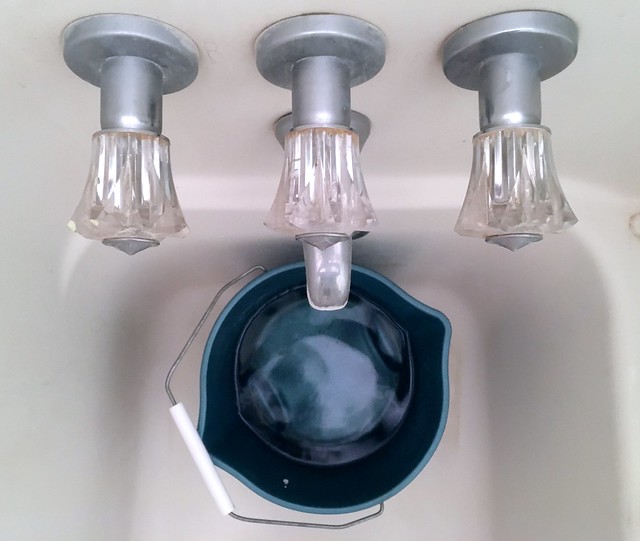 A week ago the rate was half a gallon a day. I dumped the water every morning on a few of my thirsty plants outside.

But now, it’s about a gallon every 12 hours. Time to do something.

Now if I turned to a textbook (I do have a few home repair manuals), I might find one authoritative answer. It would be written in a neutral non-human voice. It might not represent the actual old hardware in my house. I probably don’t have the tools. It would use schematic drawings that do not look like mine.

So I went to Youtube. First, I find if I search on “leaky shower faucet” I get a lot of responses, but many of them are for those newer single fixture controls, or a lot of the results are also picking up leaky shower heads. But in the results I see that some are labeled “two handled” faucet which better describes mine. That gets me, oh about 5320 results.

There is going to be a lot of repetition in that space, right? Not very resource efficient for some maybe 5000 people to make their own videos?

Even on the first page, I can skip ones that are specific to a brand (Delta) or are not the two handled kind. But, still, I have more than a few voices.

This first one starts with loud scratchy audio, and the video quality looks shaky. The guy talks and talks and talks… and I start looking to the suggestions on the right. YouTube does a pretty good job of suggesting related videos, but of course, they will still toss in a music video related to something you searched on weeks ago. Creepy. I know what you are doing, Google.

The next one looks better at first, but then I notice it is the same guy. I might come back, but I am looking for a different voice.

I watch Michael’s video all the way through. The video is steady, and he gets to the “how to” pretty quickly. And it has like 600,000 views. I wonder how much a difference it makes if we see the person, in most of these they are just a disembodied voice and hands.

I learn that there are two key parts, the cartridge that can be pulled out. But there is also this “seat” inside, and I might need a special seat wrench tool. And at the end, he explains that the over-tightening I was doing, while temporarily stoping the problem, makes it worse.

And even if I am not able to fix this problem myself, in this video, I already have a lot more inside knowledge I can use when talking to an expert (plumber).

I could stop here, maybe, but the point of the chorus is to get a few more voices, as confident as I might be with Michael, I feel better reinforcing.

Next is a guy named “JunkStar”- he makes a funny joke about his shirt and his weird wall paper, but he is talking more at the beginning about his bathroom remodel. I stop before he even gets to the faucet. At this point I am looking to get to the point, because I have this base knowledge from the last video.

This Makeify guy sounds like he might be useful; he sounds young, and not just some over confident house repair dude; he sounds more like me in trying to do a DIY project. I do find the condition of his shower a tad disturbing. And he struggles with the parts- he even speeds it up and talks over where he fights to get the part off.

Then there is this funny (well maybe not for him) part where he is trying to show how to pry off the old washer, and he cuts himself with the screwdriver (I can see that happening to me). He speeds up and talks over saying he stopped the video to stop the bleeding, and he appears again with a big bandage on. This guy is so real.

I stop watching, but now I have a sense that my repair might be as simple as a rubber washer replacement.

This guy’s bathroom is less disgusting, and his voice is a little more flat, but he is very clear at explaining the process, does not talk too much in the beginning, and is good at showing the steps. This re-enforces what I learned from Michael. I watch one more internally linked video where he replaces that seat inside the wall.

I’ve not found a single, instruction-aly designed recipe to follow, I have a few different approaches, and an idea of the process. I know I may need a special tool. I might hope a washer might be the fix, but also internally I suspect it would be better to replace that seat.

I’m about to turn my water off, and start taking parts off the wall. I may end up at the hardware store twice.

But I feel much more confident amalgamating my own knowledge from multiple sources than if I just took one for authority. Even better, I can be more informed and aware of my things in my house work, then just calling someone else to deal with it for me.

Stay tuned. I might be without shower tomorrow. But I might be with one that does not drip water anymore, and I might have that much more confidence to do the next job.

And in teaching, I’d much rather be in the business of helping people build confidence than getting correct arbitrary answers.

UPDATE: The next day

Removing the hardware was not hard, and something I may have figured out without the chorus: 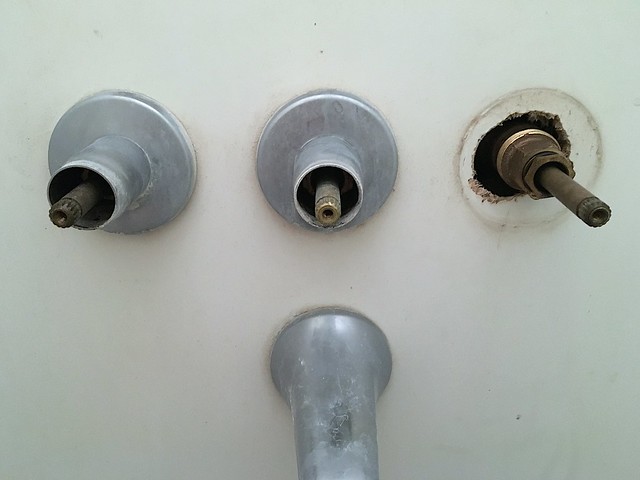 The parts are old, and my guess the original plumbing put in 29 years ago when my house was built. But I do know from my videos that the wear on this washer is really bad: 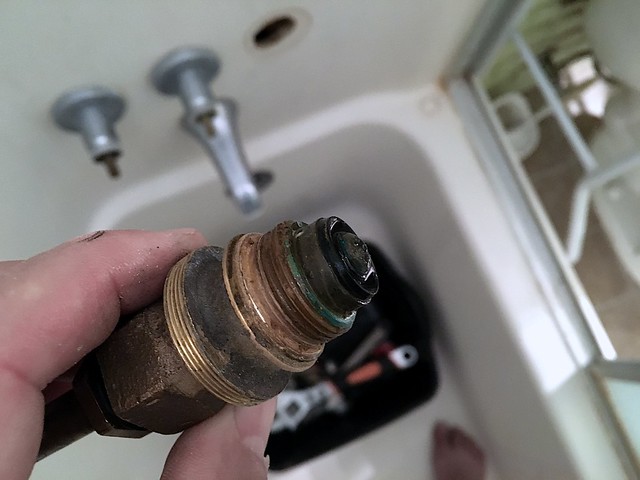 It only takes one skinned knuckle to remove all the cartridges, which, you may notice, are all slightly different. I am glad I remembered the hot water one stuck out a little more. I take them, and the handle/wall covers to Home Depot in Payson, thinking I might replace it all. 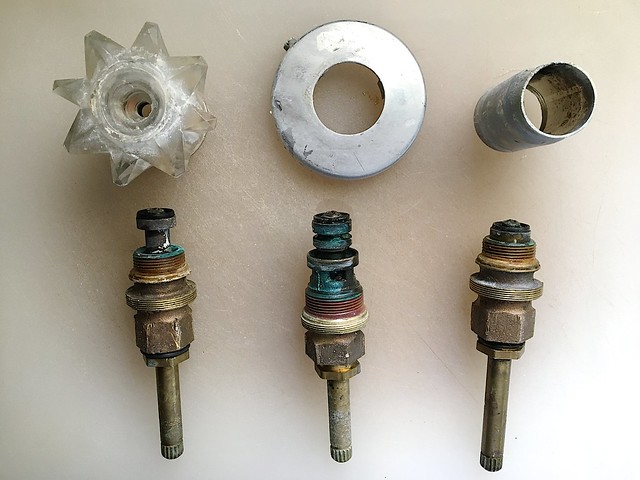 By the way, I love Home Depot because they let me take my dog in store.

A helpful guy in an orange apron takes me down the faucet parts aisle. Unfortunately they do not have a good match for my old cartridges, he suggests the plumbing supply store, which is not open until Monday. He agrees with my suggestion that replacing the washers might fix it, at least for the short term.

I ask also for the seats (the screw in receptor that sits in the pipe in the wall). I would never have known to ask where it not for the videos I watched. I also know to look for the L shaped seat wrench to get them in and out.

He suggests getting generic hardware replacement. That is the part that takes the longest, trying to decide what kind of knobs I want.

Back at home, replacing the worn washers is easy. With my new fangled wrench I am able to remove one of the seats, but the new ones are not the same size and won’t go back in. The cartridges are easy to return to their location. I start putting on the fancy new knob– and it won’t work, it sits too far out from the metal collars.

Instead, I just clean off the old knobs and metal collars, and return them. I think they are all the same, but there are some subtle differences, so it is a few iterations to get the handles back on.

Time to see what happens.

Time to turn the water back on… will there be a geyser in my bathroom?

My water shut of valve is at the bottom of my property, so it takes a few minutes for me to come back and see what is spraying. I say this because last winter while replacing my bathroom sink faucet and realized I had the wrong supply line, I thought had the shut off valve closed when it was open. I ended up with an inch of water in the bathroom by the time I got up the hill, cussed, and ran back down to shut off the water again.

I thought it was still dripping. But I returned hours later, and there was no water in the bucket.

High fives all around!

It may not last, and the fixtures are still ugly, but I do not have to call a plumber. And I bought some time until the day I take on a total redo of the shower (one day ripping out that prefab fiberglass stall and doing tile).

But most importantly, it is nearly impossible to top that feeling of doing this myself.

Top / featured image: A screenshot from the YouTube video How to fix a Leaking Bathtub Faucet. The video is a standard YouTube license, so a lawyer might state a screenshot is not kosher. I could easily ask permission. My hunch is Michael Sarracini does not care, the guy has 691,000 views on this one video. Follow the rules or …

By the way, if anyone actually reads these little blog postscripts I have been liking the YouTube Screenshots tool for grabbing a high quality frame of a video without trying to do it in the YouTube interface.