I was so glad I tuned into a Virtually Connecting session this week from the Digital Pedagogy Institute at UMW on Inclusive Globally Networked Learning (all materials including the video link are there).

This session was led by three educators from three different (non US) countries – Maha Bali from Egypt, Kate Bowles from Australia, and Paul Prinsloo from South Africa (Maha and Kate were really virtual, Paul was really on site at UMW). I’d urge you to read Kate’s deeply thoughtful follow-up post US/not us.

I ended up yet again down another looking back / looking forward moment from one of their activities. I almost want to write a post at how effectively they created a session that was so participatory, but will focus on the one where they asked participants to add to an open Google Doc a response to the question “What kinds of images, names, people, issues come quickly to mind about the places we’re from?”.

Even many years after my first live document sharing experience (before Google acquired what was then known as Writely) – it is still electrifying to be writing in the same document at the same time as multiple people in other places.

I must admit my first thoughts for Egypt are terribly stereotypical. Charlton Heston in the Ten Commandments. Pyramids and Pharaohs. The Suez Canal. Arab Spring.

Sometime tonight, maybe while washing dishes or dog walking, my brain totally remembered an experience with Egypt I had forgotten about. In the mid 1990s, I was working as an instructional technologist at the central office of the Maricopa Community Colleges in Phoenix, then fiddling with a crude early web, Hypercard, and Macromedia Director. I remembered a project we did when Jon Lea Fimbres, a counseling faculty at Paradise Valley Community College, left the system to join her husband who was appointed superintendent of the Cairo American College. Jon Lea left with ideas of projects she would do there.

I think it was our center’s director, Naomi Story, who came up with the idea of asking Jon Lea to write some articles for our publication about her experience living and working in Egypt. It may have been my idea to do a web site about her experiences too but publishing a series of her emails back to us.

Hence was born this vintage 1996 web site, with it’s HTML tables, font tags crude layout that still renders quite fine 10 years later — it was originally published at http://mcli.dist.maricopa.edu/mobius/egypt/ but as all my old web sites were mothballed, I reclaimed it and made it available at http://mcli.cogdogblog.com/mobius/egypt/.

Okay, the Sphinx head graphic is so cliché — but it’s an original. At the time a student named Tony worked in out office, and he would use some Mac software I forget its name (it came in a real paint can) to create graphics for our projects. I think he picked the image.

I enjoyed reading through some her messages, yes again, this is an American’s perspective in Egypt, but as a seasoned international educator, Jon Lea wrote insightfully of her experience. From her first message, September 26, 1996:

This is a special moment! You are my first e-mail American contact! The internet is a fabulous security blanket. I am only a key-stroke away.

Thankfully we bought our computer. We settled on a Performa ( simple but effective and within our budget). As it turns out our school is installing fiber-optics and networking and up-grading…..therefore few computers are running at full capacity at this time. Having a home computer gives me a great deal of freedom and in a land of “different roles for women”, it is nice to have choices.

“Living” in Egypt has many advantages. We have been able to discover parts of Egypt that aren’t on most tourist stops. People are generous, kind and patient with foreigners. Egyptians seem to get a lot of entertainment out of watching and helping all of us adjust. They have dealt with intruders for thousands of years. I want to share this side of Egypt with you. 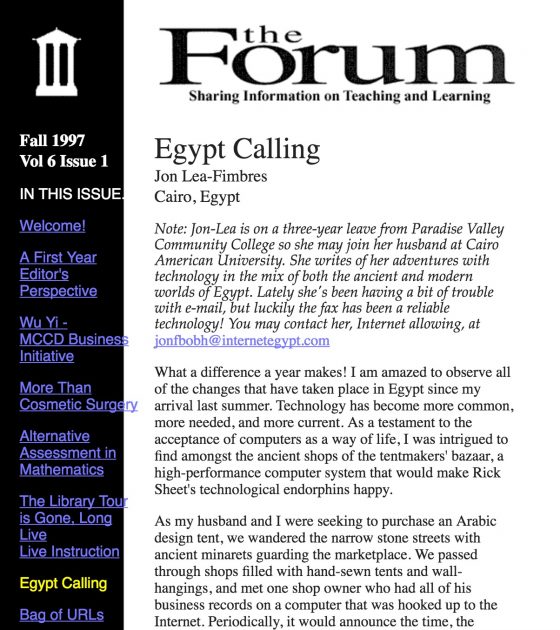 A “post” from Jon Lea in our MCLIU Forum publication, 1997

In February 1998, she wrote “Never Felt Safer” following a terrorist (before we called them that?) attack on tourists at the Luxor pyramid.

The media was very quick to report the shootings and deaths of visitors to a temple in Luxor. That was important and tragic news. BUT what the media did not do is follow-up on the reactions and precautions of the Egyptian people after the tragedy. Within a day there was a national sense of mourning and grief. Throughout Egypt there was a personal, as well as, collective display of sadness and loss. There were many peaceful gatherings of Egyptians to show their concern for the families of the Luxor visitors and by gathering together peacefully, the Egyptian people were making an effort to remind us all that the terrible behaviors of 5 or 6 does not reflect the nature of millions.

Shopkeepers were publicly apologizing, banners and signs were posted denouncing the violence and roses were gently given to visitors to show the compassion and understanding of suffering that the Egyptian people seem to naturally share with others.

When an Egyptian greets you with a friendly, “Welcome to Egypt” it is a very genuine invitation to share in the pride and history of their amazing country.

Because of this strong sense of family and religious values and a legal system that has very strict, rapid consequences, I feel safer in Cairo living alone while my husband travels than I did in Phoenix. I know that everyone in the neighborhood is looking out for anything unusual and will take action against anything strange they see going on. There is not a strong sense of materialism yet, so most people are not coveting designer products and all of the gadgets of the West.

As I travelled home for the holidays, I was amazed at the concern of Americans about this region, while we as Americans seem to be increasingly numb to the regular acts of violence in our own country. While I was flying home I was reading a U.S. newspaper describing the tragic high school shooting in a prayer group, the holding hostage of 60 kindergarten students and the trial of the Oklahoma bombing suspects. It seemed ironic that my seat-mate was asking me, “How I could live in such an unsafe place like Egypt?”

Jon Lea’s message from August 1999 brought up the importance of listening that was spoken much at UMW this week– I think I mentioned it in my message to her (which I did not think to include in the site, it was meant to be her publication space.

When someone deeply listens to you
it is like holding out a dented cup
you’ve had since childhood
and watching it fill up with
cold, fresh water.
When it balances on top of the brim,
you are understood.
When it overflows and touches your skin,
you are loved.

When someone deeply listens to you,
the room where you stay
starts a new life
and the place where you wrote
your first poem
begins to glow in your mind’s eye.
It is as if gold has been discovered!

When someone deeply listens to you,
your bare feet are on the earth
and a beloved land that seemed distant
is now at home within you.

Allah has willed that you live temporarily in Egypt. Submit. Like sunshine, Egypt will help you grow if you don€t pull down the blinds.

Be discreet. Be friendly. Be sensitive. Hear the call to prayer. And pray. Laugh often. Drink Stella only when necessary. Never ask directions if you want to find your destination…When you drive, honk your horn. Remember that goats always have the right of way.

Be a child. You are living in the world’s largest sandbox. Dust often or don’t dust at all. Discover freedom on a felucca. Remember that the mosque is a house of God. Be gentle to the donkeys and the children. Their lives are harsh. Fast at least one day during Ramadan. Then break the fast with a Moslem friend.

There is still magic and mystery in this ancient land. Savor the moments.

Again, I cannot assert that this is an accurate depiction of Egypt, as it is, via the words of a Westerner there. But as I read Jon Lea’s words, I feel she was rather proactive in exploring Kate’s “not us”-ness. And even if not a full picture of Egypt, it is much more than my meager set of movie/cliché Egypt associations.

Last year I did connect with Jon Lea by email, she is retired in Tucson, and I owe her a visit. I might ask her to comment and reflect on her time there now some 10 years later.

Top / Featured Image: A graphic form a web site I built in 1996, previously published (now gone) at http://mcli.dist.maricopa.edu/mobius/egypt/ but reclaimed and available at http://mcli.cogdogblog.com/mobius/egypt/. The image, a bit stereotypical, was created by a student worked named Tony Zeka using a Mac software I cannot remember except that it literally came in a paint can.