I don’t need in-flight entertainment on a digital screen. On a flight from Phoenix to Seattle today (and on to Vancouver), seated in 30F, the window shade is up. My head is pressed against the window like a kid on his first flight ever.

Other passengers are looking at device screens, books, sleeping, and nearly all of them are missing this show. With a late afternoon flight, I chose my seat specifically on the right (facing east), for optimal lighting from the west. When I fly over an unfamiliar place, I enjoy just looking at the land features. Mountains. Mesas. Canyons. Rivers. Islands. The size and shapes of towns. Road patterns. Circles marking field irrigation.

But flying in and out of Phoenix, 95% of the time the view is perfectly clear, the earth laid out like the biggest relief map. I love studying the detail and matching what I see to where I have been. This experience changes when I can recognize things. 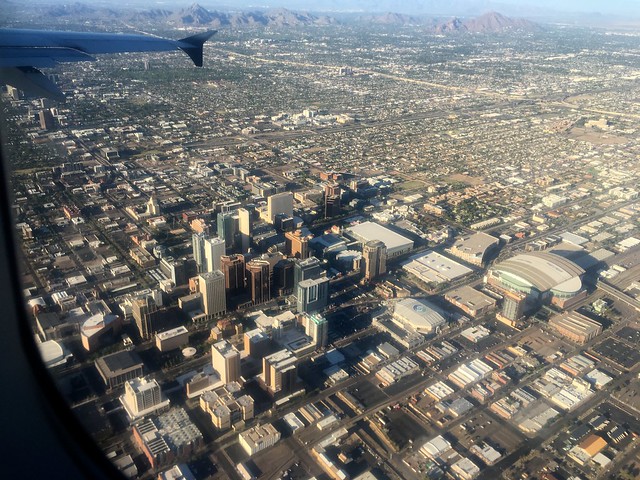 Taking off to the west from Sky Harbor Airport, I spot the bumps of Papago Park, the high rises in the tiny clump that is downtown Phoenix, the sports arena and ballpark downtown, Grand Avenue cutting diagonally northwest in defiance of the east-west / north-south grid of the city. The green of Encanto park. I see the zig zag line of the western canal, miraculously moving water a hundred miles from where it was diverted from the Sat River. Camelback Mountain, in the middle of the city, where once I got married on top, seems puny. There are the mountains of the Phoenix Preserve, North Mountain with antennae, I think I spot the location of my friend Coop’s house.

The suburban development spreads like a long roll of fabric, past Cave Creek, then out over a giant patch that is Anthem, a community of 50,000 that did not even exist when I moved here in 1989. I can spot to the east Horseshoe and Bartlett Reservoirs, places I once rode to see by my bicycle, and farther beyond the green ribbon of the Verde River, an anomaly in the desert. Then we are over the heavily corrugated country north of Phoenix, hardly any sign of habitation. Unless you focus. Then you see isolated ranches, dirt roads. Bigger mountains, and I trace the meanders of the Verde River and where Sycamore Creek meets it. The town I spot is Cottonwood where I remember the times visiting my friend Todd, who recently moved to Seattle.

The distinctive jagged cliffs and canyons around Sedona poke up, places I have hiked, camped, mountain biked. There are the energy vortices I never felt. I can pick the scenic road up Oak Creek Canyon, the views my Mom missed because she had her eyes closed. This is the edge of the Colorado Plateau, with a table cloth of green pine trees. It looks deceptively flat from this height. It’s easy then to see Flagstaff, the San Francisco Peaks (highest point in the state, I’ve stood there). Flagstaff, where I live the summer of 1990 (as a Geology grad student working at the US Geological Survey) and in 2000 for my sabbatical from the Maricopa Community Colleges. The density of memories there is as easy to spot as the shape of the city. 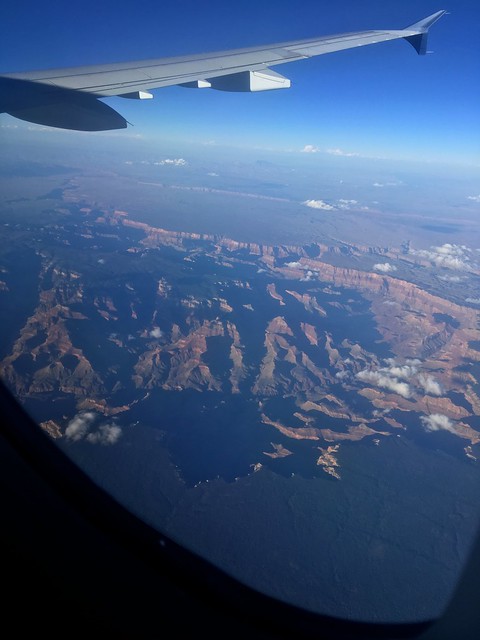 The again more wide open space. Bumpy volcanic hills, read rock cliffs. And… a giant gash, catching the setting sun, the cliff layers of Geologic time revealed in the Grand Canyon. While awesome at this site, nothing, nothing, no beautiful photo can come close to matching that soul engulfing experience of standing on its edge, and seeing person dwarfing immensity of space and time. The memories come like the flow of the Colorado, the churning machine of water seeking the sea that loses all sense of scale from the top. I think of hikes there, backpacks in the winter with my Geology buddy Tom, the 10 day raft trip, doing a Rim to Rim overnight in the hottest part of the year, a dreadful night of neat hypothermia with my stepson Travis, the weird run in with a creationist while camping on the remote north side area of Vulcan’s Throne.

My mind wanders some, I lose track of my landmarks. My guess is it’s somewhere over the unwanted desert land of western Nevada and Eastern California, remembering my long road trips through there as a graduate students driving to my field research area outside of Bishop California. I remember driving through Death Valley once in summer, at 5am it was 105°. And one time coming the other way I sped through the valley trying to reach the end of the valley before a dust storm (it was a tie). 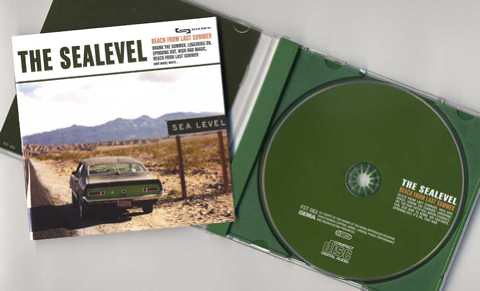 Taking a photo of my 1973 Ford Maverick at 130 feet below Sea Level, a photo eventually part of one of my Amazing Stories.

Even in this remote desert / mountain terrain, you cannot help but see signs of human activity. Not much, but I pick out roads, patches of solar energy panels, mining scars, dead straight lines of transmission lines.

Somewhere ahead on this route, because I have flown it before, we will cross over the Sierra Nevada and Long Valley where I did my field research almost 30 years ago.

Hang in there, here comes the metaphor.

I love this experience of matching my experiences to the terrain, connecting place to time. The terrain, the view, the map, is not my memory. It jogs memory, or looking at the land causes me to reach back and toss a few more neural ties to those memories. I might be fairly sure I am seeing the town of Jerome, but even if not exact, the process of trying to do that, to me, reconnects the memories.

And I wrote this in just a text editor, no access to the internet to look up place names, to place check against Google maps. The only information sources I have is the window and my mind.

I had been thinking of this in light of a talk by Audrey Watters about the pitfalls of memory machines. And at this point, I may not remember well the context of her remarks (those I will look up later and link, like this next quote). Audrey makes the case that “human memory is not data storage”:

One of the problems with this latest information technology is that we use the word “memory,” a biological mechanism, to describe data storage. We use the word in such a way that suggests computer memory and human memory are the same sort of process, system, infrastructure, architecture. They are not. But nor are either human or computer memory quite the same as some previous information technologies, those to which we’ve outsourced our “memory” in the past.

But there are people who want to put a lot of stock in offloading memory to machines, who may have better recall than my gray matter, but even with so called AI they suck at inference and context.

But it’s not a contest, John Henry.

I do rely much on digital memory to connect, jog my human memory. This blog is an extensive record of ideas, activities I can use to mostly find out what I was working on or thinking about or ranting about going back to 2003. I rely more often on my flickr photos to tie in where I was before, or people I was with, as I can often search and find out say where I was on this day in 2010 (returning from a trip to Houston). But I often not only use the search, when I get to the photo, I am like doing the shelf browsing thing people did in libraries (in the old days). With a little trick, I can then move forward and backward in my image time line (you have to remove the stuff in the URL that comes from a search).

Yet that is not my memory. It is pictures and often captions as pointers. It is not the territory. I also use my email history, Google Calendar, even my TripIt records to find where I was on certain days.

Those are still not memories. They are more like meta-data to memories. Pointers.

I think back to the web documentary (yikes, I am forgetting the name, but I will search later and find/link it) (Later- It was In Limbo) featuring a conversation with one of these guys who wears a camera all the time, life logging in photos. To me it was sad when he said rather pointedly that he values capturing all of this data, that… he never looks at the photos.

What is the point? If you can capture all photos, you do have this extensive digital record. But to him, none of hos photos had value. There were more like some stop animation video of his daily doings.

I cannot fault his method, it obviously means something to him.

But that’s not my practice.

I also take photos every day, something I have done since 2008. But I do not photograph everything, I make choices as to what I can see as interesting, or possibly interesting during the day. Every night since 2008, I cull them, tossing away 2/3 of them, add captions, titles, tags, and upload to flickr. Are mine more valuable than his? Yes, to me.

To me the process of choosing images reinforces the memory process, as does the writing of titles and captions, sometimes even short essays, stories.

But even then, the memory is not in the photos or flickr. It’s in me. They provide the stimulus to reconnect, to remember.

Many people fly through life and never marvel at what’s out the window. They seek sleep or silly movies or games. That’s fine. But miss the experience of perspective of unnatural height, view, seeing a scale of their life that is just out there for the looking.

But me? Face pressed to my life window, looking at where I have been, where I may want to go– going back and forth in time and space– and just in awe of it all. 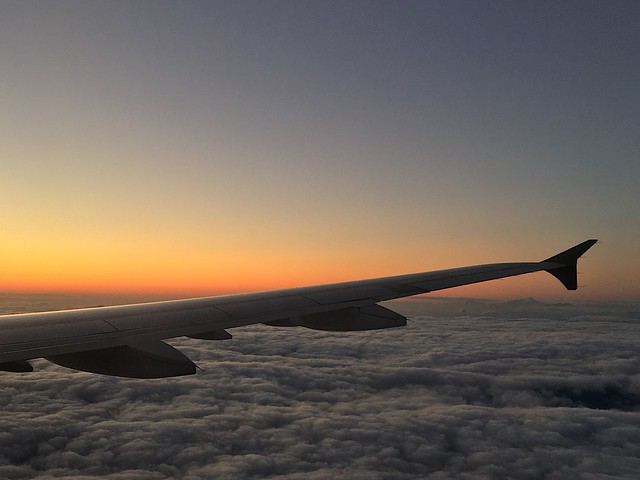 Top / Featured Image: Another trip flying into / out of Phoenix, me looking at the places I have been in the Superstition Wilderness area east of Phoenix my photo https://flickr.com/photos/cogdog/13504895753 shared under a Creative Commons (BY) license