For the second time (first was in 2014) I have deleted my Facebook account. It ought to be the last, but as they say about saying “never”.

My reactivation in 2015 was a need to have an account for a course project, then I had a few web sites for clients where I needed to post updates to their pages. Then I had this idea I could not understand or investigate the blue wall from the outside. I kept a light profile, I never clicked reaction buttons. I stayed logged out, and maybe went in once a seek to mostly look around.

I could say many conversations by friends I could have easily jumped into, and more and more I see people conversing there than in twitter or the dead blogs left by the side of the road (this is your cue Sandy to jump in ;-).

Some may think it’s the repeated rounds of losing catfishing extermination efforts. No, that really does not affect me as much at all as the scam victims.

There is the stink of the elections around it, being eviscerated so well this week by Mike Caulfield.

There is this utter nonsense:

I’ve said it way too many times, but I cannot shake the bad mojo I get from Facebook. A voice was in the back of my brain, it was that of Kate Bowles I heard while on a panel with her at University of Mary Washington. Skipping the explanation, she just says she does not do Facebook, and here are the ways to get in touch with her.

Kate’s conviction stayed with me, and I knew the second fork was poised.

It’s the “inevitability” of Facebook that grates at me too. “Everybody is on it”, like a big country. 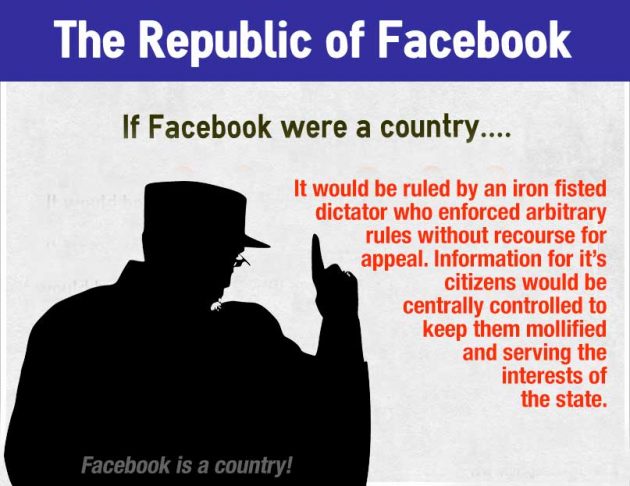 My tweeted mashup of that frigging cliché

Or that people cannot part from the network there. I believe them, but that’s not true for me.

Or that it’s the only way to stay in touch with family, friends. When I read that, what I hear is a failure of technological literacy. 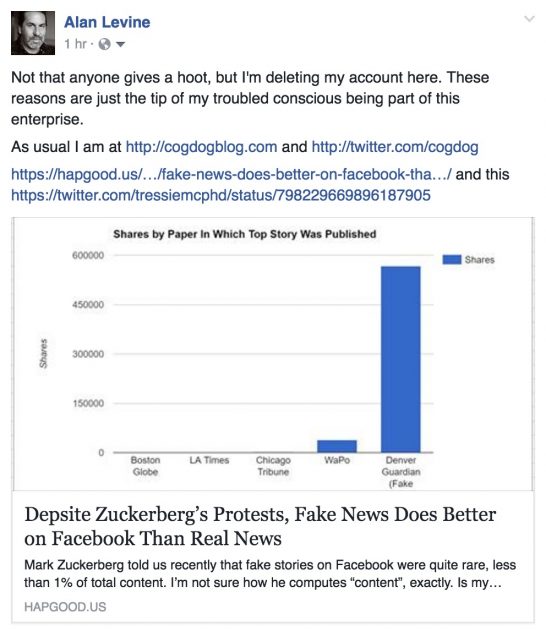 … within an hour, one friend (the real kind, not the click kind) called me on the phone.

I did not deactivate, I took the nuclear option. There is nothing in my account I even needed to download. They don’t make it easy, but in my post I did have the direct link https://www.facebook.com/help/delete_account. And of course, you get like 95 prompt boxes offering ways to change a deleter’s mind.

Then you get thrown captchas that are impossible to read. 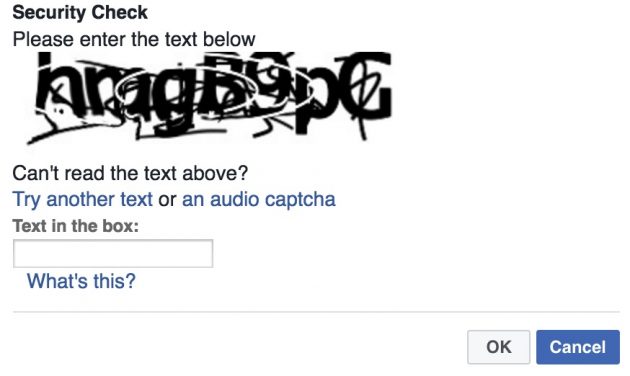 Good luck getting past this captcha

I went for the audio captcha.

And once that is done, it’s still not done. If I login in the next 14 days, they will revert my deletion.

Oh the temptation is… naught.

I can say that after my first deletion, when I went back to create an account, it was empty, and it felt like they really did delete my information. Of course, there is no real way of knowing for sure.

I am not looking for anyone to defend their use of Facebook (ok, Sandy? I get your reasons). I know it works for many people. I am not telling anyone that they are slimy for being in Facebook.

It’s just not something I can do without getting all itchy in the conscious. And that the power that Facebook has is only what we give them.

Top / Featured Image: A slight remix of a flickr photo by Joshua Rappeneker https://flickr.com/photos/joshua/3475920872 shared under a Creative Commons (BY-SA) license. I brushed out the green sprig and burned a Facebook logo in the meat.