Is it all about the licenses?

Many explanations of Creative Commons make it sounds simple, walk through the questions of the chooser, and out plops the correct license. Go share. It does work well.

But deeper understanding often leads to greyer area, where the answers spiral down to technical and jargon related insider language. We are not suggesting five as the optimum age to frame answers to conceptual questions.

This week’s challenge actually comes from a tweeted response or just a call for explanation from Aaron Davis, and educator and openness advocate from Melbourne, Australia. I have never met Aaron, but we sure talk a lot online. He asked qith the #CCQuest tag:

I waited a few days before jumping in, but for a online community to thrive, you should never let asked questions sit un-attended to. As always, I start by looking around, and found of course a solid answer in the Creative Commons FAQ

What I get from the answer is that software licenses have requirements that Creative Commons licenses do not include, so it suggests other open source license options, recommending that CC not be used for software. But the language is a bit heavy on license jargon. Would a high school student understand this? It answers the question in the FAQ, but does not really get into an understanding of why these licenses are different.

I found another blog post which added some more insight, that the NC and ND Creative Commons licenses are incompatible with hardware

I’m thankful that Aaron took the lead to post a question; this idea of having a community and space where questions and answers could flow between members, not just from a single source FAQ, could thrive.

So let’s help Aaron (and others)? 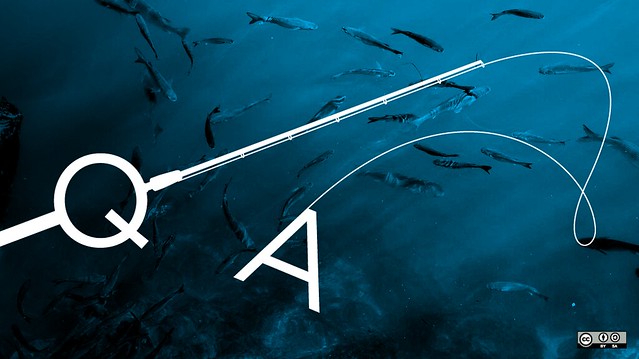 And we can let Aaron tell us if this is useful.

@cogdog but at a “5 year old”, non-technical level, the answer is: there is no difference, both are about sharing stuff openly #ccquest

Featured Image: flickr photo by opensourceway https://flickr.com/photos/opensourceway/7496803778 shared under a Creative Commons (BY-SA) license By the way, this flickr account has a wealth of fantastic images about openness, open source, even cows… and all are licensed for reuse under Creative Commons