You see a broken icon hole in a post five years old
What were you thinking using Flash?
There was no HTML5 and Adobe seemed alive,
Now that video’s as good as trash.
And that link to what you read is now just a 404 dead.
Keeping the content going is a big pain
Does any one even care, if the web has too much wear
Most let it slip down the drain.

This all started from a morning desire for a snarky tweet. About twitter. About how it is seemingly feeling dying, as my regular Tweetdeck columns are drying up.

My associative middle school brain went to Monty Python and the Holy Grail, the I’m Not Dead Yet scene.

I was pretty sure I had done at least one before, so I searched on my laptop for files with “not dead” in the title. I landed in a place I forgot, some media and whatnot files for a presentation I did in 2010.

The dusty neurons lit up a bit, and I found my blog post. Yes, it was a presentation at the northern Voice conference in 2010 I did with Chris Lott and Brian Lamb.

It was a mess.

The video remix I was looking for was a broken embed, because I had old code to embed a quicktime movie. There was another broken one for what I figured was a UStream.tv Flash embed that was shared by Grant Potter. And the link to the conference site http://2010.northernvoice.ca/ is dead.

In my desktoo folder, I had the quicktime video, so I updated that to YouTube, and now it is embeddable as a replacement for the Quicktime version.

The Ustream one is a pile of old flash embed code (I’m to tired to put in the code, this is a screenshot)

The URL in the src="" parameter does pull something down from Ustream.tv, a 157 kb Flash file. I’m not about to put a flash player in my site. Ustream was bought by IBM sometime ago, and it looks like all the old content is gone (?). That one may not be resurrectable.

The link to the Northern Voice conference presentation is dead as anything http://2010.northernvoice.ca/not-dead-yet-blogging

But the Internet Archive Wayback machine has most of the site: 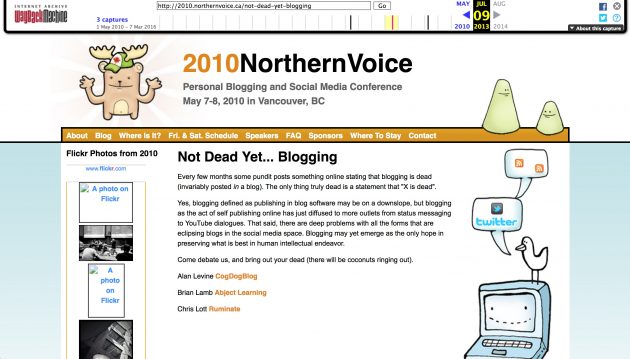 There’s only so much an archivist can save, and that’s just one old post among many.

If you want some longer than next week durability from your WordPress site, I’d suggest the following:

And timely today was as Adam Croom posted about his process to keep a clean archive of a course he has taught in a number of forms over the years- and how he has been archiving past WordPress sites as static HTML (using the aptly named “Sitesucker” app).

I recommend checking out how Adam has set up a beautiful archive of past classes for PR Pubs, something your LMS will likely just flush and forget.

I went through some of this a year or so ago and since then I have done a few WordPress sitesucked to Static HTML rounds. It just works.

You have to care, a lot, to be a self archivist. And doing so means you have an attitude that your past is not an embarrassment that needs regular cleaning, but shows your growth arc (I’m looking sideways at the tweet deleters).

Most companies, organizations will just dump rather than archive. Beyond the Internet Archive, a lot hinges on individuals who care about their stuff. I put much more faith in individuals to care about preserving their own past.