Among the list of “wow it was 25 years ago” was this Fast Company article that came across my twitter stream, “Myst” at 25: How it changed gaming, created addicts, and made enemies.

In Myst, you explore an ornately detailed island that leads to other vaguely Victorian sci-fi worlds (called ages) created by a character named Atrus. You’re presented with lushly detailed screens—punctuated by animations—depicting the scene around you, and can point and click your way through puzzles that feel woven perfectly into the tapestry of the game. Despite its largely static nature, its groundbreaking pre-rendered visuals (which many people called photorealistic at the time) made Myst feel like the first convincing virtual reality experience, at least in the sense of feeling physically present in a fictional world.

With some help from CloudConvert I turned that webm video into a gif and popped it into giphy. Did you know there was not one gif found on a search that brought up the game?

I cannot say that I am included in any of the three items in the title, but do have warm memories of this CD ROM. In my early years as an instructional technologist at the Maricopa Community Colleges in 1995 got the idea to run some software evaluations on Games and Simulations, publishing everything as I did to our web site. That site is gone, but I have my own archive of Shall We Teach with a Game? 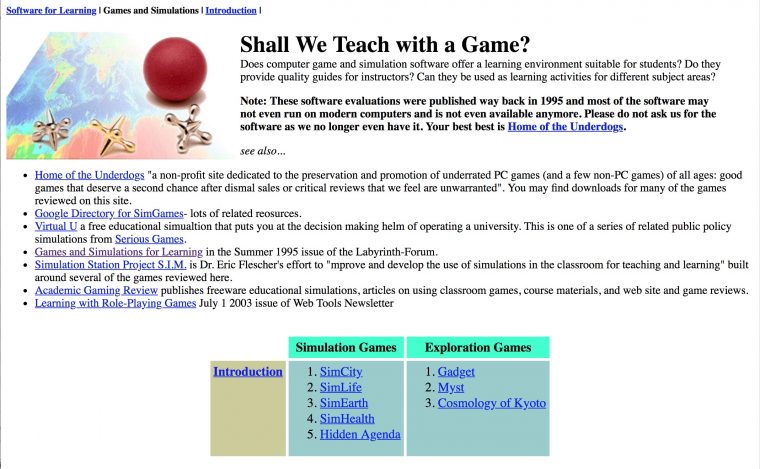 The project was among a few other software evaluations our center ran. We would sponsor faculty to explore software and complete an evaluation that was likely created by our instructional designers.

From the Games and Simulations introduction, we explained the interest (the “information highware certainly dates the writing”):

In these days of Information Highways, CD-ROM, multimedia, Nintendo-Sega-3DO, it is difficult to recapture the excitement when Atari introduced two movable paddles and the floating ball that made up the video game “Pong.” Nevertheless, a key factor in the commercial success of computer games are their engaging degree of user interaction and how an individual is drawn into the constructed environment.

Many early educational computer applications offered little more than electronic page flipping or”click and read.” It has not significantly changed with the emergence of multimedia, where applications become “click and see.” However, a new breed of games has appeared, a melding of the interactive entertainment of games and education, called “edutainment.” The Maricopa Center for Learning and Instruction (MCLI) is exploring the use of such games and simulations for teaching and learning in the community college environment. For instructors, these packages can provide time-saving individual practice or simulate complex representations of real-world systems. The question we are asking here is “What is the value and place of computer games and simulations in the learning process?”

The programs we have selected are loosely grouped into two categories. The first group are simulations, in which as a user you set and monitor variables in a model of a real system that reacts back in a continuous feedback loop. Many of these programs come with well-developed instructor guides. The second category are more or less exploration/adventure games, where you may receive little guidance as you enter its world, and must rely on your curiosity and risk to solve a mystery or unravel a tale.

Myst was definitely in the Exploration category. It game you nothing in terms of directions, that was the idea.

For each title like Myst, we included the evaluations from participating faculty (I am pleased to note we offered this opportunity to both full time and adjunct faculty members):

My favorite parts were seeing the different ways teachers could think about using the Myst environment for learning activities, so it was not just to solve the puzzle. I always remembered the Spanish teacher who suggested requiring students to explain how to get to a certain part of the island in Spanish or describing the various surroundings. Of course, many reviewers described how much time it took to navigate (one could never get anywhere).

With some great irony, I admit I could never get too far in the game. I suck at video games.

I was most impressed with the suppression of the computer interface in the game, it was none. From the review I wrote for our journal:

The elegance of Myst is in its simple interface. You will not find rows of icon-adorned buttons, numerous pull-down menus, or floating dialog boxes. The Millers note that in real life there are no buttons labeled “Click here to go forward”.

And since at that time I was doing most of my media in HyperCard, it was quite a shocker to find that was the engine that ran the game (lots of heavy mods a top, and re-written of course when it went to Windows).

It did have a strong influence on a later (now quite dated) project I did, where I aimed in Macromedia Director, to create the same kind of environment for Negative Reinforcement University 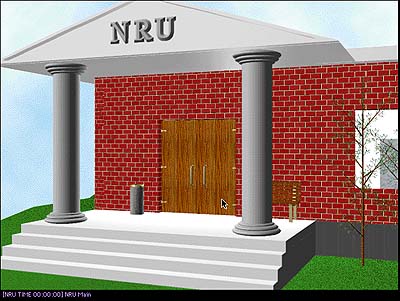 Front Entrance to NRU. Where are the button? 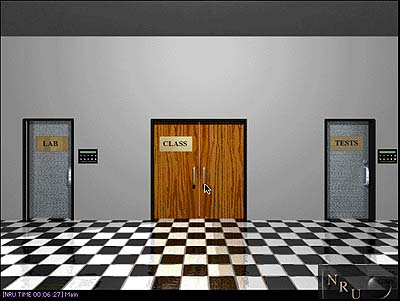 What kind of menu is this?

Anyhow, this was a wee bit much of a long bit of nostalgia for this old projects. But thanks Myst for the inspiration, even if I could never really get far on the island. Maybe I am still there. 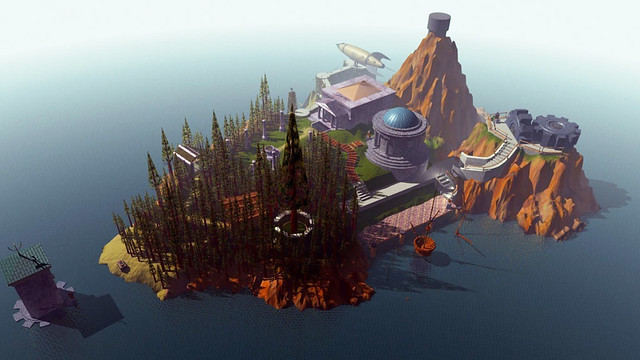