It had been a while since I saw the flickr error screen that meant “oops” something went wrong, the “Bad Bad Panda” message.

And its intent worked; while frustrating, the image made me smile. I remember when it looked like Yahoo had shelved the panda.

I was pretty sure that it had been part of flickr a long time, but as often happens, my memory circuits can be faulty. The error screen does link to the source flickr photo, which is dated April 13, 2013. Not so old. 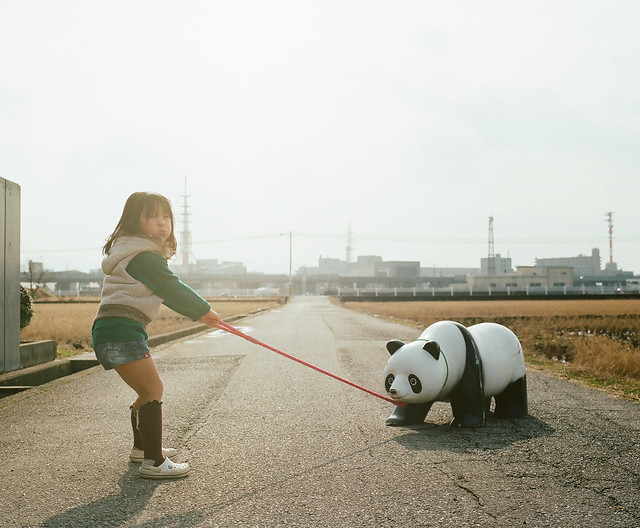 But wow, the image by Toyokazu Nagano has 768,000 views. And adjacent ones in the flickr stream has 6 figure view counts too, though nothing new since 2014. Not bad for someone with just a free flickr account, with maybe 500 photos posted.

There are some good stories from the Japan Times and NPR about the ideas behind the photos of a dad making/sharing memories of his daughters.- the often used location described by the photographer as an “agricultural road” was dubbed the “magic road” by fans of the photos.

Taking a step back and observing my children’s everyday lives through the finder, I found a lot of mini bits of “good news” you would usually ignore — really insignificant things — and the photos I took of those moments were unexpectedly popular with my family.

I believe laughter has a depth and universality that transcends generations. And laughter has the effect of livening things up instantaneously. It also has the power to make people happy. Laughter is a communicative shortcut, and I think it applies to communication between family members as well.

“If you can make ’em laugh, everything’s OK!” is also one of my theories on “familyhood,” as a father. Actually, the emotional bonds, solidarity and unity of a family (and surely of lovers, and the fellowship of friends, co-workers, etc. as well) come from watching, listening to and reading the same things and laughing together. I think those connections must be born of simple things like that.

So, I don’t want to get just my family to laugh, but the other people who see the photos I upload, too. I want others to savor, as I do myself, the wonderfulness of the instantaneous connection and solidarity of laughing together.

And it was a deliberate choice by flickr to have a more fun error message page and pandas are the names used in the code and API. Apparently the mystical pandas had a hand in the algorithm used for selecting “interesting photos” – there’s even a rainbow laden page where the pandas are sort of barfing up photos. Seriously. Fun watching.

And then of course there are the spawned remixes and spin offs. More fun.

So just un-necessary silliness? Not to me.

Featured Image: My own screen capture of a tweeted flickr Bad Panda message very questionable reuse (not really, it is a flagrant violation) of the original copyrighted image. See you in court.