This is part 4 of 5 in a series of posts for Building Connected Courses: Feed WordPress 101 Basic Concepts of Syndication – and what to think about even before you touch that WordPress thing Installing and Setting up Feed WordPress – Minimal settings, and planning the way content is sliced, diced, and recombined Feeding […] 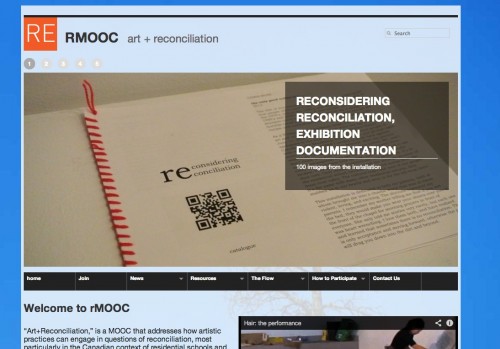 Brace yourself for another 10 mile long blog post; much like the recent one on the Harvard Future of Learning site, this one focusses on another syndication driven wordpress site. Brian Lamb approached me in mid June about working on this project, and coming on the heels of the Harvard one, I was able to leverage bits of that site’s framework– but it is still nowhere near a copy/paste/go operation. These sites are hand crafted.

Art+Reconciliation addresses current issues in Canada dealing with the history of residential schools and the ongoing work of the Truth and Reconciliation Commission. The idea is (I might be wrongly paraphrasing) to examine how art and artists can both create awareness of the issues and help generate communication around the issue.

As conceived by Ashok Mathur, this would be an open experience where online participants could be part of the August activities at TRU, where artists were invited for a residential experience in Kamloops, and leading up to a national TRC gathering in Vancouver.

A driving part of the design was an effort to forefront the media that would be part of the activities, as well as infuse the syndication of content from twitter, flickr, blogs, etc. The “MOOC” part of rmooc is open to question- it was not a course per se, but a series of events and performances. It’s not massive, bit was open and parts were online. Who cares, the media shows some amazing gatherings and art making.

For some numbers on what happened (and keep in mind, this is the midway point), the site accumulated:

So if you just look at numbers, you would say “obviously not massive” but numbers are not the whole story, and the goal of the first phase of rmooc was in the events that took place in Kamloops.

Lost in the numbers are thing like a message from Leslie Lindballe, who was following RMOOC from Saskatchewan

hey #rmooc people… are you familiar with http://t.co/NVRMqLbGbj I just made a tile that will go to a #residentialschool survivor

And again, rmooc is only halfway through its course.

As before, I will attempt to review the design elements, the WordPress customizations, and the setup and implementation of the syndication parts. An additional (and new for me) element was using Mailchimp for managing email communications.

Much of what follows paralleled the work I did previously on Harvard’s Future of Learning Institute site.

These days you cannot spit without hitting a new MOOC or someone talking about how MOOCs will revolutionize education, etc. If you’ve been following this for anytime, you will know the story of the first ones, the “connectivist” kind in some parlancesactually naming them c-MOOC (David Wiley’s Intro to Open Ed, Alec Couros’s EC&I 831. […]