Just got word via the tweetvine from Dave Lester that the first ever WordCamp Ed (WordCamp Education) is happening in Washington, DC, on November 22 at George Mason University. WordCamp Ed is a WordCamp focused entirely on educational uses WordPress “” in schools and universities. The inaugural WordCamp Ed will be held at George Mason […]

photo credit: lordog Continuing the gastronomic theme for my WordCamp experience, here are a few quick things I took away from the experience (for complete coverage, see Andrew Mager’s live blogging) WordCamp’s t-shirt colors (brown this year) seem to follow directly the lead of Northern Voice ;-) Almost everyone I met was with some company, […]

To say I had a great time this past weekend at WordCamp would be an understatement. Beyond the gathering of 400 other WP junkies, there was getting to meet all the Automatticians (and fascinating to learn they work as a completely decentralized organization; 30 some employees strung across the US, Canada, Bulgaria, Australia, Japan…).

And of course the wp-fanboy-plugged-in cherry on top was going to the speaker’s dinner the night before and being seated across from Matt Mullenweg, who remembered sneaking in on my session at Northern Voice. Matt described that they only plan the San Francisco WordCamp, and the other 15 or so that go on around the blog are locally organized– he says he likes to show up un-announced to check out what people are doing who use his company’s wares.

Yes, it was through a connection via James Farmer that I got invited to do a presentation on Education and WordPress (somehow in the program that was handed out 20 minutes before show time) it was labeled as “WordPress and the Future of Education” quite a larger scope than I had planned. But hey, it is “camp” and we can diverge.

My stomach tied a few knots when the day before I saw the list of other presenters and found myself a minnow among some big fish. And then Matt said more than 400 were registered! And.. he gave me an opening slot. Wow. Woah, Neo, Wow.

The 30 minute slot I had was devoted more to a quick smorgasbord sampling of the varied ways educators were using WordPress now, collected from people who tagged stuff and added links to my wiki — what I pitched as It’s All You Can WordPress at the EduBlog Diner available as an annotated flickr set. 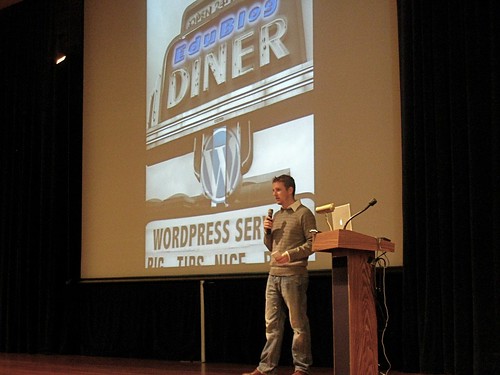 Matt Mullenweg opens WordCamp with my title slide in background!

I do have an audio recording below, and hoping I got in all the shoutouts that were deserved. Here is where I gauged the connection of my topic with the audience by asking to let me know how many of them went to school ;-) 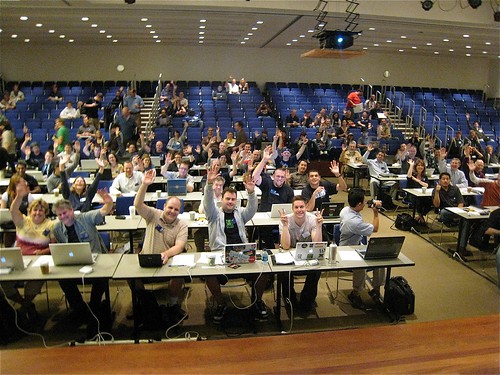 and then how many of them used the web in school…