Just got word via the tweetvine from Dave Lester that the first ever WordCamp Ed (WordCamp Education) is happening in Washington, DC, on November 22 at George Mason University. 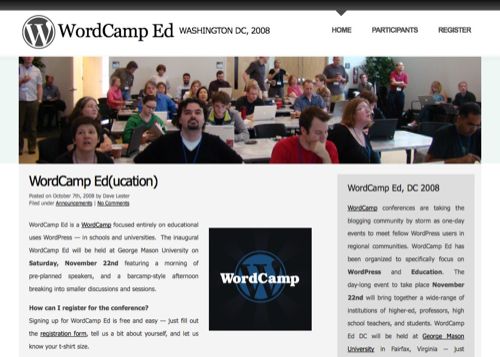 WordCamp Ed is a WordCamp focused entirely on educational uses WordPress “” in schools and universities. The inaugural WordCamp Ed will be held at George Mason University on Saturday, November 22nd featuring a morning of pre-planned speakers, and a barcamp-style afternoon breaking into smaller discussions and sessions.

Oh I am envious of those in the area that can show up. I will be a bit too far away, even farther than Arizona. But I really like that Dave is doing this- I got to meet him only briefly at WordCamp in August in San Francisco — but he is doing some very cool stuff with ScholarPress– plugins for WordPress that are of use to educators.

I had a great time at WordCamp but felt it was really dominated by all the people trying to make a living selling WordPress development services (like 400 of them)- a WordCamp for Educators is an awesome idea. They are doing more unconference stuff than WordCamp main, and even better, registration fee is by donation:

There’s no mandatory registration fee for WordCamp Ed, but we’ll pass around a hat at the conference to help defray the cost of shirts and food.

I already see Cole Camplese and Patrick Murray-John are signed up, but where is the Reverend EduPunk?

Anyhow, I hope the WordCamp Ed concept takes off with more of them (look how many WordCamps there are, and all but San Francisco are locally organized). I wonder how many I could get to my cabin for WordCampEd Strawberry?