Last weekend I built a fence around a vegetable garden in our yard. I am not really much of a craftsman, but this project came out pretty nice. Working with the hands got me thinking about (reaching for the metaphor) building things out of learning objects. 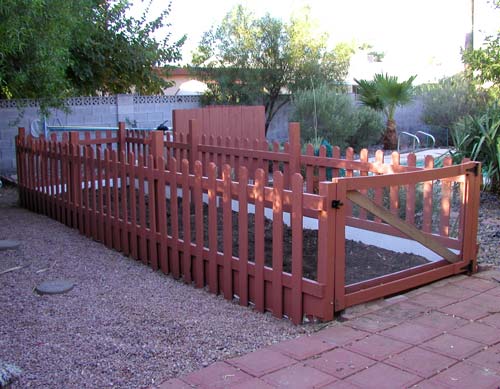 I have harped before that there has been way too much emphasis on the creation of the “repositories” and the piles of meta-data, and the search tools- and almost nothing on the craft, the art, the magic, of building something out of the things inside the collections.

Last week at one of our faculty instructional technology meetings, we were trying to get some commitment to taking on the learning object issue. There was the usual tired, over-trodden attempts at definitions, a lot of shrugging, and then the often worded desire for some sort of magic, point and click tools that would assemble LOs into meaningful learning activities.

As the line goes in the hilarious Australian comedy The Castle:

But as I worked on that fence I thought about what an un-realistic, un-attainable, expectation this dream places on technology…

It goes back to what good teachers have always done.

The know their field of expertise, they look at and review materials from a wide variety of resources (books, articles, films, other projects, newspapers, libraries, etc), and then they assemble something new by hand— there was never a push button lesson planner for the classrooms of the 1960s why would we expect a dumb computer to do it now?

When I was building my fence, I had to define in my mind what I hoped to create (objective). I made measurements, drew up some plans, made some sketches, looked at a bunch of existing fences. I went to Home Depot !a tremendous repository of objects!), and sought out what I thought I needed, making changes because they sold 2x4s in 8 foot sections rather than 10. Maybe our learning object collections need some helpers in orange aprons.

Working on the fence, I had to adjust also when things did not work out, or where I got a better idea how to join the boards, or realized that some caulk would really be good for sealing the corners.

Do you see how iterative a process it is? How un-automated? How it is not just about the objects? How much I sweated because it was 105 degrees?

Sure I built this fence out of simple pieces of lumber, deck screws, hinges, paint, but these objects alone do not make a fence. And yes, I could have gone an easy route, and paid someone to build it, but where is the pride or growth in that?

Learning too cannot be built at the click of a button- we put something of ourtselves into things when we build it by hand, when we craft it.

So get out your saws, hammers, drills, etc. It is time to get to work and out of the dreamland that a bunch of lego blocks are going to string together a learnign experience.