It’s the day before I board the Big Old Jet Airliner to the NMC Summer Conference and I am piling on the Web 2.0 Tagging goodness, or zaniness. This recap is as much to document as to thanks those I lean on.

Last year, at the 2006 Summer conference in Cleveland, being my first one in the fold of NMC employment, I rolled out a Tag This Conference page, mixing up del.icio.us, flickr, and hopefully technorati content all tagged with nmc2006, the page doing so with some help from a local version of feed2js. Repeated this tagging for the 2006 Regional Conference in San Antonio.

So without too much extension, the Web 1.0ish page is up for next week’s conference spiffed up a bit by bringing it also up as a Tumblog, which presents the feeds from the same 3 sources a bit more stylishly.

Okay, that is good, but…

Then I saw where George Siemens et al for the Future of Education conference (drats, it overlaps with ours, arghh) was using a new tool called attendr to create a map view of conference participants by location plus tags for interests.

So I did what good technologists do- I stole the idea to create a similar one for NMC 2007. I twittered about it… and 8 or 10 friends jumped in and added themselves. I had made the attendr map with colored pins for people from NMC orgs, guests (non-members), and another for first timers (not the best choice since there is overlap, oh well, it is beta!).

And I inadvertently created multiple pins for the admin account and myself (and there seems to be no way to remove) for beta web 2.0 stuff, attendr is more alpha.

Then I used the admin tools to send invites to every registered attendee for the conference (provided from our registration data) to add themselves to the attendr map.

Wow did they respond. In less than 36 hours, by counting names on the list, 138 have pinned their location, about 25% of the participants. 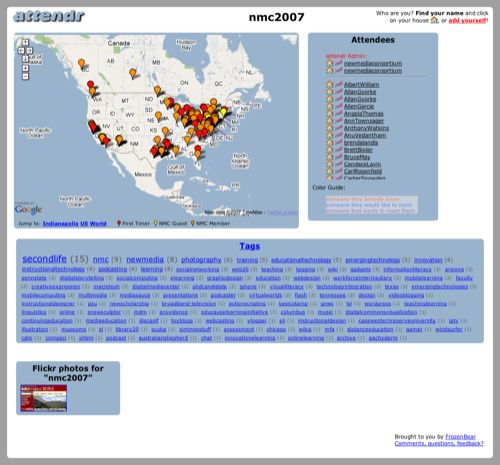 I got a great email from one colleague:

Attendr is great. I am looking to meet people at Cornell, Duke, and UPenn and have found and linked to 2 of the 3. I am also interested in meeting people who work in universities that have non-academic arts programs. Any idea how I might filter the member list for that information? I know that I can send out a general email list request but that seems like casting a huge net for a very small fish.

Wow, if I had thought of that, my email might have contained more explicit examples or suggestions for tagging, as the tags people apply for themselves define connections in attendr. If you click a tag, it highlights everyone on the list with the same tag, and connects them on the map via lines. Powerful. Or, if you click a person, it connects by color coded lines every other person who indicated they “know” or “would like to meet” the person. Wow, and since you add an icon, look what I can glean from Hilary Mason, whom I only know secondarily via her fab work in Second Life on Virtual Morocco, via the map of connections: 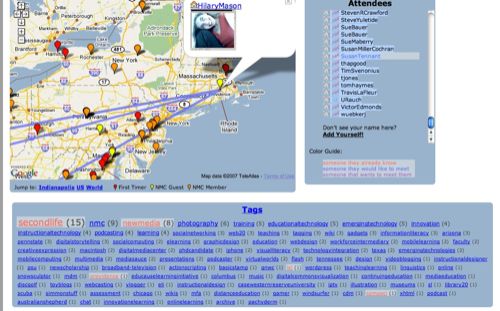 and her profile, which gives a bio, her web sites, RSS feeds, her own tags (and connections to others with same), and who has met her or who she wants to meet: 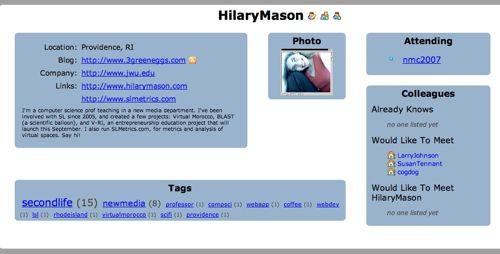 And by checking off people on the list, one can get rather connected quickly: 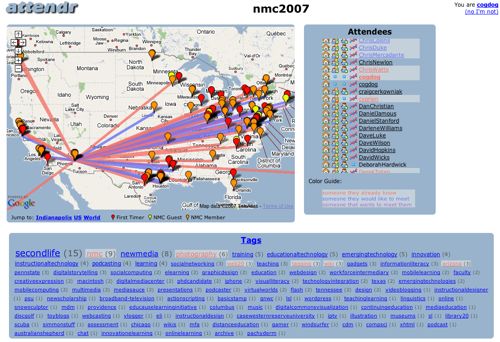 And by virtue of the URL / map name I chose for the site. nmc2007, automatically, attendr starts collecting flickr images with nmc2007 as a tag (of which there are few, until I get to Indy!)

Attendr has a lot going for it, and much is subtle. There are some interface quirks, and the adding oneself, logging in and out, take a bit of poking to figure out. But the amount of connectivity based on a map, a bunch of users tied by location, 3 kinds of relationships, and self defined tags is very powerful.

But wait there’s more. I went back to the well of the Future of Education Conference (actually yo read the forums, which are massively active- George has a magic touch and great, great friends!) and I rediscovered a tool I had not toyed with in a awhile – PageFlakes, a site that builds personalized pages with different RSS gadgets– much like Google Home page (my mainstay) but with the key feature that one can create a PageFlakes site that is public, viewable by others.

I liked the different things mixed together for the Future of Education Conference, and again, I did what great technologists do- I stole the idea again to created one for the NMC 2007 Summer Conference, with a few discoveries along the way. It does not work at all on Safari (you get a warning) or Camino (no warning, it just doesn’t work). I made one tab for the NMC’s ‘tag this conference stuff’ plus ones that pull in NMC content via RSS feeds- especially cool is the podcast one, where podcast content is made available via a skin that looks and works like a black iPod: 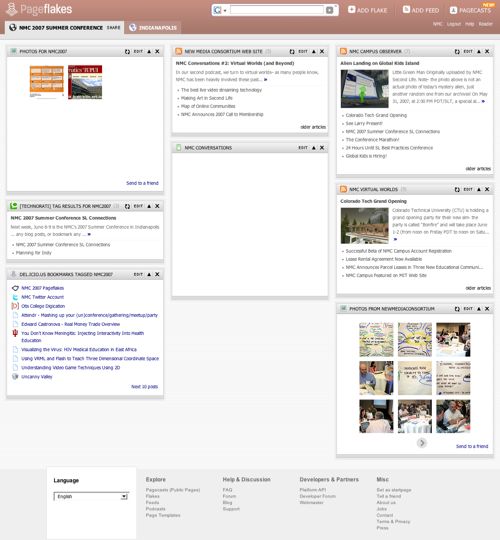 I made a second tab for things of local Interest to Indianapolis, including local weather, pub guides on a Google map, local photos, events, and more.

it’s all rather fluid since you can slide the blocks around to re-arrange the layout.

The downside? My URL “website” is based on an NMC email addres I used to create the account- there seems so way to change it.

But wait there is even more. At Faculty Academy, I liked how they set up the TwitterCamp (and Adobe Apollo app), a conference twitter account, to display activity from everyone twittering who was a “friend of fa07”.

Once more, as the best technologists do — i lifted the idea. But I went down a wrong path to customize the app. I downloaded the Flex environment and flailed away at imported the TwitterCamp source file, made new versions of the PNG images for the skins, but got off base trying to re-created the app in Flex. With some emails to Andy, my palm (of my hand) slapped my forehead, as there was no need to recompile the app- a right/control mouse click on the TwitterCamp application file, select Show Package Contents allowed my to copy new PNG files into the content, edit the config.xml file, and voila! I had a TwitterCamp app, with NMC colors and logos: 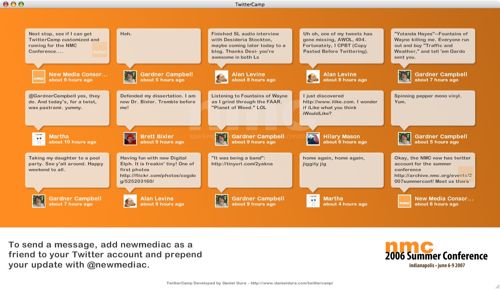 So now I can install this (by dl-ing both Windows and Mac versions of Apollo RunTime it can go on any machine) on any computer at NMC, and have a dynamic Twitter screen of people’s tweets about the conference (or their kids or cat or dinner or ….)

So now I have a pile of things to set up and talk about at Indy,all of which is possible because of the friends who’s web sites I frequent and who let loose with their ideas.

Lastly, the blog post title is for you Dr Glu, who has been a Twittering Monster on song lyrics and such. Rock on, yes you Sgt Pepper on your 40th.