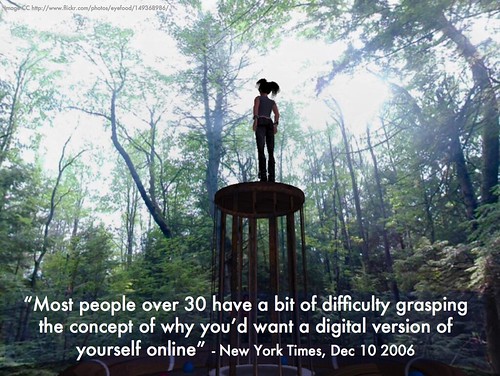 most people over 30 have trouble grasping why would want digital version of yourself
posted 15 Dec ’06, 6.51am MST PST on flickr

There used to be all this talk of the “digital divide” and it was between the haves & the have-nots in terms of what they could afford. But I think there is an even bigger gulf in mindset between the generations. It’s the difference between “digital natives” and “digital immigrants” as per Rupert Murdoch www.flickr.com/photos/lynetter/322112273/

I adore this image because I think it gives you a spark of one reason why you might want a digital version of yourself. It’s from SecondLife. Someone has set up a place there where, when your second life character walks in, it’s appears as if it’s surrounded by the real life place. There’s already talk of “˜virtual tourism’ thanks to Google Earth. Imagine when that’s combined with this type of graphics so you can explore real life places virtually.

In fact it’s already happening. A friend told me how they visited Miami recently and one of the guys they were travelling with really knew his way around the roads, shortcuts and all. Even though it was his first visit to Miami, he knew his way round “˜cos he’d played Grand Theft Auto!!!

Image from Flickr CC www.flickr.com/photos/eyefood/149368986/ thanks to Kisa Naumova
Quote from www.nytimes.com/2006/12/10/business/yourmoney/10frenzy.ht…

I’ve tagged, used, and admired these collections of imagery, ideas, and references compiled in flickr by Lynnette – recently organized as a mega collection of Interesting Snippets:

This is my personal dumping ground for various cool quotes, the odd stat, as slides to talk around when describing how things are changing online and in media & communications generally.

They’re in no particular order. I create them as much for fun as anything as I’m fascinated by this whole field, but luckily I have a job that lets me spend a little time on it too (thank you Isobar!).

There is a lot here to like in the vein of powerful, visual communication. All of these “slides” use powerful images, all of them re-used from the flickr Creative Commons collection, all credited to their owner. It is the antithesis to DeathByPowerPoint

Like this one– I recognize the avatar profile of Kisa Naumova. The image alone is powerful, but combined with a compelling quote, and annotated, references in the caption, it is both a valuable standalone message (like to blog about), or one could pull these together into your own mix.

If you looked at this form, there is no reason why you could not do an entire amount of blogging on the flickr vehicle, then remix your own collections into these sets. I am thinking of using these as models of something I might be able to whip into a workshop activity.

But this collection is incredible, awesome, stellar, just totally fab in its depth and breadth- there are 229 ones in here… and it seems to be growing..

So a tip of the blog hat to Lynetter for an vast treasure chest of snippets.