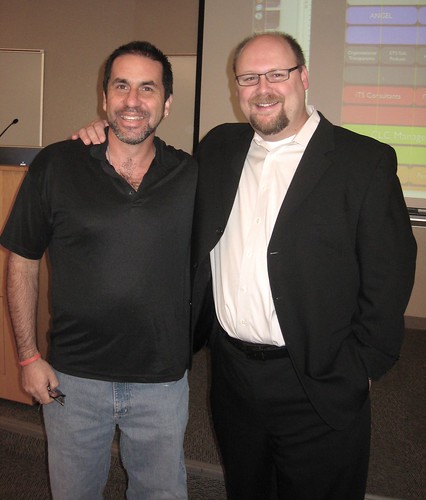 I’ve "known" Cole Camplese for a number of years, though we had yet to meet… He came to speak at Maricopa last May, and wouldn’t you know it, the same week i was at University of Mary Washington.

So our "knowing" each other is that way of crossing paths in blogs, wikis, email, del.icio.us, mutual colleagues in common etc.

But today, I can cross this one off the list, because we got to meet as he spoke again at Maricopa, today at Mesa Community College on"Opportunities for Digital Expression".

Cole is so connected to many powerful ed tech ideas and programs (geez, Google him and he occupies the entire first page of results), and today he spoke of the strategies and successes they have had at Penn State University, using his concepts of building on the structures and technologies already in place. In a short span of time, they have implemented distributed media labs, podcasting, iTunesU, hosted blogging for students, a gaming initiative, the very cool Hot teams, community tech support portals. I could feel the jaws dropping among my former Maricopa colleagues. PSU has 84,000 students at 24 locations in a state larger than Maricopa County; I remember all the inertia about how hard change was in a system of 1o colleges.

Anyhow, I got to meet Cole. If I was paying attention to my 43 people site, I’d add him and cross him off.

Anyhow, the proof is in the picture. And like he quoted himself in regards to his appearance on YouTube, in reference to the old saw about camera adding 15 pounds, there must have been 10 camera pointed at us ;-)

PS Cole is the one with the neater groomed beard.

It was also interesting to see a bunch of former colleagues at Maricopa. Some of them asked if I came for this all the way from Austin. I guess they missed the key aspect of my NMC job of working from home (yes, in my underwear, yuk yuk yuk).

One was kind enough t sign me up to the MCC wireless (shhhh, don’t tell the security guys), but crickies. It would not let me do chat, email, oh the chains! So I bailed and connected via my EVDO modem and enjoyed the freedom.

I have to say over and over how impressive the changes they have and are implementing at Penn State University in teaching and learning technologies, and thoughtfully implementing web 2.0 stuff. And the sheer brilliance of the Hot Team approach is worth “stealing”. They must be doing something good to get Lessig to speak at their Teaching and Learning with Technology Symposium.

And it sounds like they just have so much darn fun, too. Just check out their podcasts.