I love you commenters. You make the blog go round.

Following up on the last “story” post about an old electric guitar, Cole alertly noticed I’ve been playing around with my writing both here and in my flickr stream with some extended personal yarns (David’s Chair. Seeing the Door). Yes, its my blog and I can switch my topics, though I am not sure any more what is on topic or off topics.

Especially in my flickr stuff, I’ve been giving a lot of thought to weaving more thoughtful (or at least intended that way) text than just a caption or, as I remarked in my recent talks, enough of these hastily posted photos where the only context is a title like “IMG10253.JPG”. There is some curiously interesting, for me, energy with not just including a picture as an illustration but weaving words and images into some combination, making the images communicate words and the words maybe communicate pictures.

So I am wondering its fine and self-fulfilling to do these personal stories, how do I extend this writing style (if there is really one) into other topics? This remains to be seen.

Or maybe I am just bored about writing things about spammers, ed tech, WordPress, or PHP.

But a bloggers writing ought to be always evolving unless one begins to drink to much of their own self hype.

And even more, as my own sister comments (which is both weird and neat to have family members reading my rants), I completely forgot a side segment of the Telecaster story. Having given up my one true love guitar, I did purchase a cheapie, a Fender Mustang: 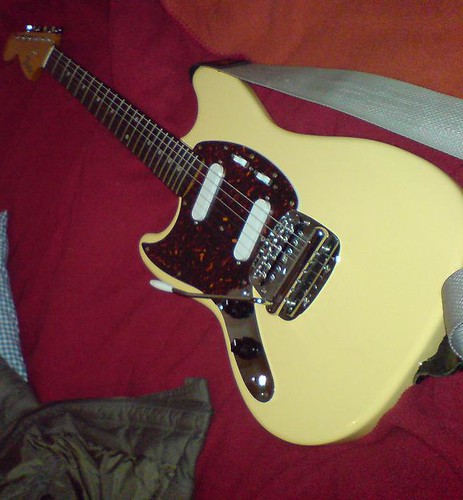 Mine was uglier, black with some candy-ass starburst pattern. The tremolo bar was funky.

But it was no blonde Telecaster.

Anyhow, before I left Baltimore for by big western journey to Arizona (yet another series of stories), my last night was a party with the old friends, steamed crabs and beer of course.. and I decided to do my own Pete Townsend and smash that crummy guitar on a rock in my back yard.

Somewhere there are analog photos of this, some mullet head kid smashing a guitar. It was a moment indeed, thanks sis for pulling it out of the dust bin.