I am already over-the-top fortunate that my work for the New Media Consortium allows me to do that from my home in the small mountain town of Strawberry, Arizona– I can do my work anywhere I can get electricity and broadband.

But some more luck is enabling to have a new workspace for November, where I am 90 minutes outside of Reykjavik, Iceland. 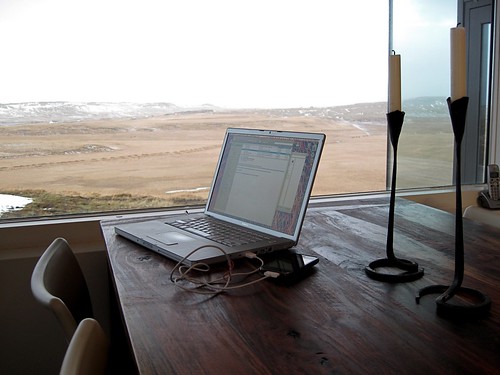 This all came about because a long time friend knows the owner of the house here, who was looking for someone to watch the house and her dog while she and her husband are on vacation. There is internet here, and electricity, and in a pretty splendid package 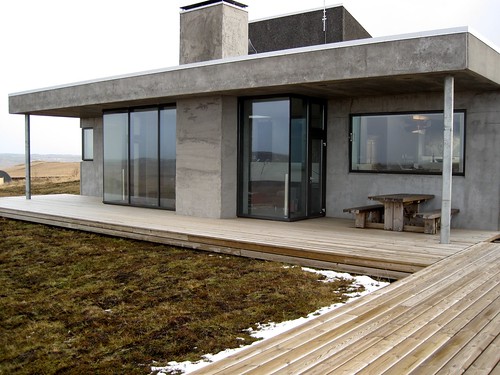 The owner is an architect and designed this modern place. It sits atop a field with a sweeping view of land they own, including a horse pasture with 18 horses. One of my jobs is to look out the binoculars form the living room and make sure there are 18 and they are grouped together. The other job is taking care of an Iceland sheep dog named Skinna who is quite cute. 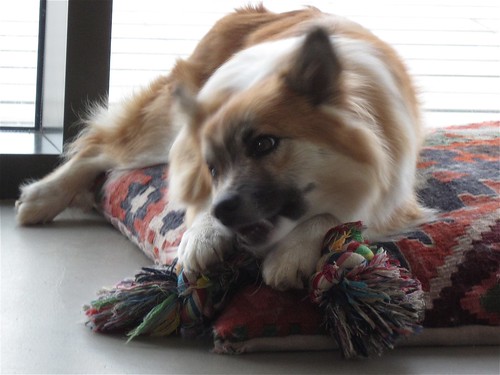 I had another amazing opportunity to visit here back in 2000, when both I and the web were a bit more raw and young (that is one of my favorite “only on the web” stories), though that one was in June.

For those wanting to comparison, I found online (now cannot recall the source) that Iceland has about the and area of Kentucky but the population of Cincinnati, Ohio. And I also read that there is only about 100,000 Icelanders outside the captial city of Reykjavik

Everyone’s first reaction was saying how freezing cold it would be here. Well, there is “ice” on the name, but the island sites aside the mid-Atlantic rift, an active volcanic zone thus providing plenty of geothermal heat, and the climate is realtively mild due to the influence of the gulf stream. So the temperatures look like they hover maybe 10 degrees above freezing in the day and flirt with freezing at night.

The travel here involved an all day flght to Boston, whose airport presented a few challenges of locating other terminals and getting internet access within, but despite some angry tweets, it was not a big deal. I ended up with a 3.5 hour layover; I could have cut it to about 80 minutes with a later flight, but did not seem worth it for an international connection.

Of course there was some question as to what it would be like with the recent news of bank and economic collapses here; actually, what has happened as long as I use my credit card with US dollars, it goes twice as far; sadly it is a place where the dollar is relatively strong (or should I say, not nearly as weak). The people I have talked to from here have not indicated that there are food shortages (especially as this is a country that produces a lot of its own meat and dairy), so I opted not to stuff my suitcase with ramen and spam

But it was odd when I walked into the International terminal at Logan and saw no sign of life at the Iceland Air desk. But then a woman in a witches hat walked up and started the computer (it was Halloween after all, and I did have Sarah Palin, or someone with a costume resemblance, check me in in Phoenix), though she did not laugh a whole lot at my mention of being “glad that you were still in business.”

The flight form Boston to Reykjavik was routine, about 4.5 hours, leaving at 9:30PM EST and getting here a little after 6:00 am local time. After getting my bags (and getting some duty free some supplies) and picking up the car keys left for me at the security desk, it dawned on me that I was going to be driving 80km on strange roads in a different country in darkness. Fortunately, it is a very nice car, and while I had good driving directions, the gently directions of the car’s GPS made it easy peasy.

After about an hour and a half, the sky began showing hints of promised light, going from dark, to patches of green gray. It began unveiling an eerie moonscape on both sides of the highway east of the capital city that was certainly laced with not a small amount of snow and ice. I passed one photo op- a lit of row of green houses, glowing brightly, surrounded by white snow.

My route left the main highway down a narrow road that gave way to gravel, and gav eme serious wonder to driving a not so small SUV, how one deals with on coming traffic. But that was not an issue; on the entire drive, I saw no more than 10 other vehicles it seemed.

And then I was here at this amazing house. I looked around, took in the view, and the outdoor “pot” or hot tub- that is geothermal warmed water going in the end 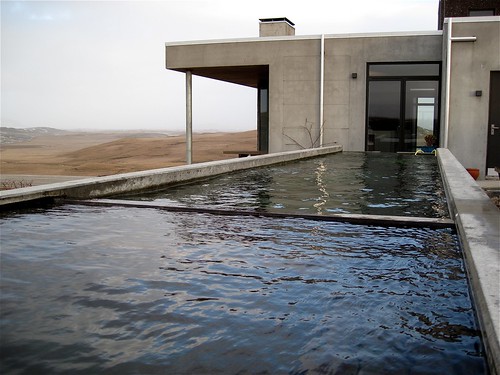 and getting to know Skinna, putting stuff away, trying to figure out how the lights, radio, tv, internet, doors, washing machine, worked.

Having not yet been reconnected to a full day schedule, I only took 2 short naps in the afternoon, so I could then get a full night’s sleep at local time. It looks like daylight now is about 8:30am to 5:30pm, but shortening every day. The afternoon was nice for light, and looking at the rain scheduled for the next few days I am thinking I should have gone farther, but ventured out for a short walk down the hill (and mud) and took a quick GigaPan image from the back deck.

Next week will be busy as I am doing my part here to help run the NMC’s Online Symposium on Rock the Academy, so the network connectivity was a very necessary resource. Actually, on doing a speed test, I pulled in over 2.0 Mb/s download speed, which is faster than I get at home. Ironically, that was pulled off the house’s D-Link wireless network; when I piped a wire from the back of the unit’s spare ports, I got only 0.7 Mb/s speeds. That seemed strange, but I will then rely on wireless.

Working here is also calling for shifting my work schedule later to mesh closer to the USA work day; so the plan is to sleep in a little (if Skinna allows so), and try working 1:00pm – 9:00pm which is about 8-5 at the home office in Texas.

It’s certainly going to be an interesting and unique experience to be here, living for a month; there is a sense that the quiet and somberness at the window could make it feel ultra isolated, so I am counting on my network to keep me connected. Not having luck finding a radio station that was narrated in Icelandic (which I cannot really complain about, it is the natural kanguage), I am listening to WAMA from Washington DC streaming via iTunes.