Thanks to a curious click form a Tony Hirst tweet, I briefly whizzed by xtranormal an interesting web app for creating/directing/producing/gaffering your own virtual movies:

Xtranormal’s mission is to bring movie-making to the people. Everyone watches movies and we believe everyone can make movies. Movie-making, short and long, online and on-screen, private and public, will be the most important communications process of the 21st century and its democratization is a massive business opportunity. Our revolutionary approach to movie-making builds on an almost universally held skill””typing. You type something; we turn it into a movie. On the web and on the desktop.

And all of this rang as 50+ Web 2.0 Ways to Tell a Story material. As I am preparing to do a remote online intro for Dean Shareski’s class this Monday, I am spiffing up the site and re-acquainting myself with old and new tools.

After an hour’s play, I am amazed as this little app, which almost belongs n a category of its own. Again, it’s tagline is “If You Can Type Text, You Can Create a Movie” which is not quite true. You also have to know how to click your mouse. So when you create a movie, you get to choose if it will be one or two characters, pick a set, music, and avatars for the characters. Now at first reaction, you are going to find it limiting, because there are fixed choices for everything.

But step back- this is another example where limited tools (being boxed in) should make you dig deeper into your creativity, of creating something inside the box, rather than whining about the box.

What you get then are more icon/tools you can drag into a script box, to change the camera angel, to add sound effects, to animate your character, etc. And then you simply type in the dialogue, then create a new box, lather, rinse, repeat: 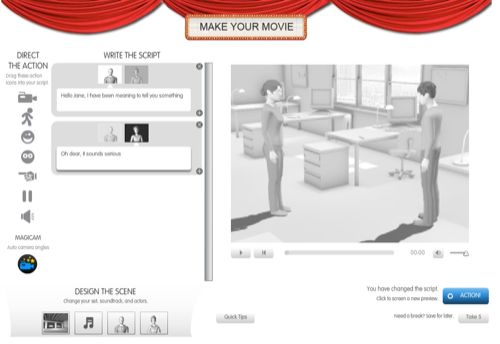 When it renders as a movie, it uses text to speech, and the character’s lips move. Okay, so it is not Hollywood, or anything close, but it is damned easy. So I used it to do another version of the Dominoe story — and lacking dog character and an ability to do multiple scenes, I made it so the person was just telling the story i his room. It is quirky, and I am not exactly sure why the American male chose is wearing something that looks like a halter, but that is beside the point.

You get your expected embed and URL direct links, but another nifty feature (starting to be part of more tools) is a direct export to YouTube http://www.youtube.com/watch?v=E6MsI7rkh50.

In Xtranormal, you can group your movies into a “Series” suggesting it’s best use is serialized shorts. And I have not explored the “remix” option, but am thinking that would be the way to do multiscene movies (or just put it in a series).

But this is besides the point- there are some nifty things you can do with creativity, in teaching camera angles, script writing (could be used to block out a dialogue?), and likely more.

But I just think it is an amazing tool, and when/if the creators get word of this post on their various keyword alerts- plea se please please leaveat least some version of this as free for educators!