Among others, Lee Blackall is asking if WikiPedia should cost six million dollars in light of the budget details released by Jimmy Wales.

After, all six million clams is a lot of moolah, more than most wikipedia authors/users likely have sitting in their piggy banks.

I could not help a flashback to what that amount could buy in 1974 to rebuild an injured astronaut:

World knowledge, encyclopedias. A 1.0 concept barely alive. Gentlemen, we can a rebuild it. We have the wiki technology. We have the web capability to build the world’s first user generated encyclopedia. Wikipedia will be that encyclopedia. Better than it was before. Better, stronger, vaster, in more languages….

And according to CNN, a bionic man built for $6 million on 1974 would be inflation adjusted to $28 million in 2008, and actual R&D costs today estimated over $100 million.

Perhaps maybe $6 million for a world written encyclopedia that has undermined all conventional wisdom on reference information, is not so much? I am trusting, and have little doubts a foundation that is based on openness would put numbers in the open that were not on target. It is more than a few linux servers running web sites, considering the scale of Wikipedia, and the multi-lingual versions, etc…

I could not find financial info on Britannica besides some basic info on Hoovers, but back in 2001, they had 201 employees, about 9 times the current full time staff at Wikipedia. 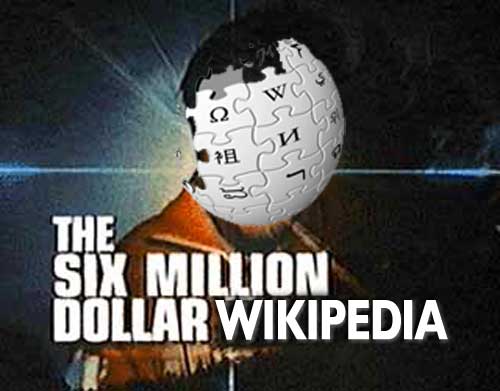 But I was also thinking, what else can one get for $6,000,000 these days? I decided to dig around the net, put to use my rusty dimensional analysis tools to discover for the cost of Wikipedia one could get:

I doubt anyone in say 2001 or 2002 would ever bet on a wiki/user generated encyclopedia to rock the foundation of the reference world, and cause the major player to shift its own gears to compete.