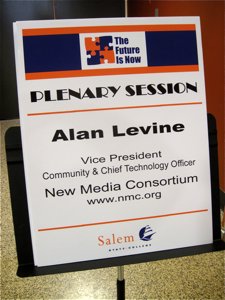 The stop at Salem was an invited session for their sixth Future is Now conference a semester end gathering for faculty to look at technology and learning, very similar to the Ocotillo gigs I previously ran at Maricopa.

Actually that had me on a double-header, first as the “post lunch wake ’em up” plenary and right after I did a rapid fire version (45 minutes) of 50+ Web 2.0 Ways to Tell a Story. 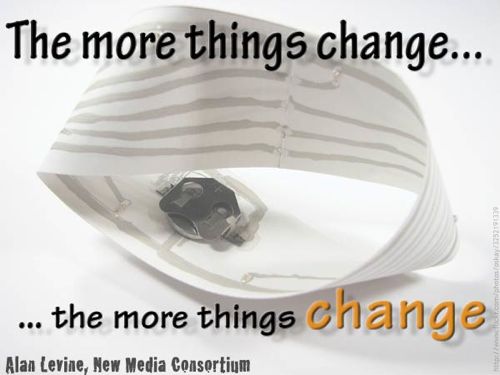 So round one was The More Things Change… the more things change, a remix/reprise of a version of this I did at Scottsdale Community College in January 2009. I have some audio I recorded with my LiveScribe pen, and hesitate to post it after hearing the frequency of my “ums”. Gotta work on that.

As usual, people loved and asked most about the CoolIris format. Learn more on how it is done not for the feint of hand editing RSS…).

My premise is to outline how in 15+ years, so many things around us have radically been changed; my own self (showing my mullet haired youth in 1992 first year on the job at Maricopa), television, music industry, telephones, newspapers… but how little school has changed in the same span. 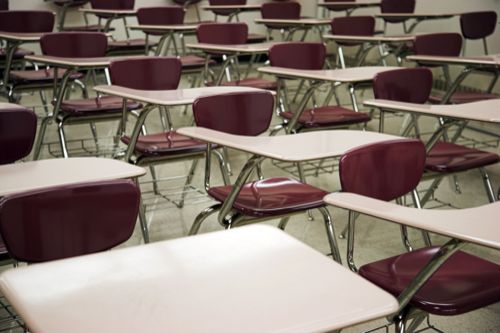 It’s a set up, but to me, it really sticks out as an obvious tension point as society and culture and business are radically changed, and the process of school remains… stuck…. in an 1892 mode.

I poke some fun at Digital Native Nonsense (c’mon did we really buy that Prensky made up stuff about brains being “wired differently”? what pseudo neuroscience is that?), but tap into some generational observations about gaming, video culture (leveraging Mike Wesch videos), the rapid increases in online activity for those over 70 (and the fun of playing the Zimmers video). 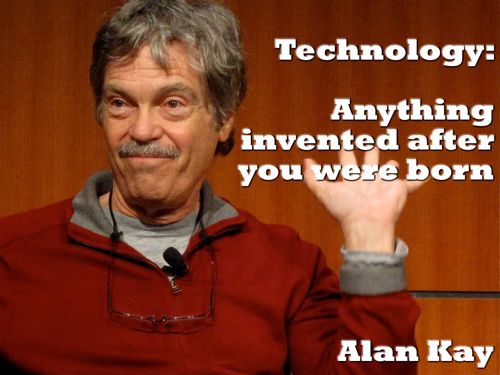 my own flickr photo, do I need to attribute myself??

This time I added some more commentary on the profound Alan Kay quote on Technology being something invented after you were born– first with using the quote from Clay Shirky’s Here Comes Everybody (thanks to some Kindle searching from Gardner Campbell– we had chatted about this while walking in NYC):

Here’s a tech history question: which went mainstream first, the fax or the Web? People over thirty-five had a hard time understanding why you’d even ask–the fax machine obviously predates the Web for general adoption. Here’s another: which went mainstream first, the radio or the telephone? The same people often have to think about this question, even though the practical demonstration of radio came almost two decades after that of the telephone, a larger gap than separated the fax and the Web. We have to think about radio and television [I think this is a misprint–should be “the telephone”] because for everyone alive today, those two technologies have always existed. And for college students today, that is true of the fax and the Web. Communications tools don’t get socially interesting until they get technologically boring.

And on top of that, I added with this bit about Douglas Adams’ version found of the same sentiment in Kevin Kelly’s post on Everything That Does Not Work yet

The satirist and novelist Douglas Adams further evolved Hillis and Kay’s definitions by suggesting a natural lifecycle for technologies. In a short essay in 1999 he proposed the world works like this:

Then with a very Doug Adams flourish, he adds:

Apply this list to movies, rock music, word processors and mobile phones to work out how old you are.

We no longer think of chairs as technology, we just think of them as chairs. But there was a time when we hadn’t worked out how many legs chairs should have, how tall they should be, and they would often ‘crash’ when we tried to use them. Before long, computers will be as trivial and plentiful as chairs (and a couple of decades or so after that, as sheets of paper or grains of sand) and we will cease to be aware of the things.

Also new was more on Collective Intelligence including two I snagged from a recent ITConversations podcast that featured my colleague Hilary Mason (oh jealousy getting interviewed by Jon Udell). One was a site mentioned by Jon Patients Like Me where people share their medical issues, treatments, results so collectively one can find patterns for what works for a large number of people. I speculated what a site like Students Like Me might be able to do. Hilary is working on a neat start up called Path101 that crawls the web for resumes and parses them into data that can be used to show patterns in people’s careers and also has an intensive personality quiz so users can connect themselves with experts and data about their career paths. The other new “collective” thing I quickly mentioned was the YouTube Symphony.

For the second part of the double header, it was a 50+ Web 2.0 Ways to Tell a Story drive by (again, only 45 minutes) I ran it the easiest way- by preloading web pages in Firefox tabs. I trimmed a bit of the up front intro: 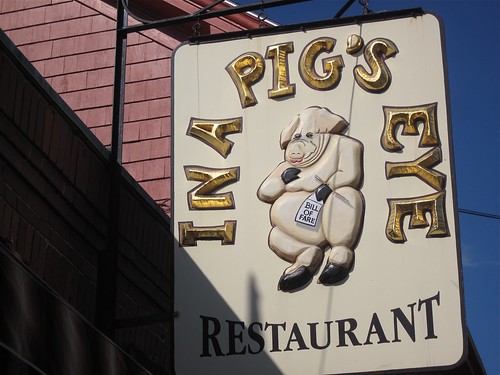 The story prompt was fun, as always, a bit slow to get started. I always find some place or custom that locals know about– with some help from my host Marc, I decided to use a local bar (I had actually photographed it the day before)- “In a Pig’s Eye” so the prompt was:

From what I recall the story goes–

The homework was to write an ending. I thought the Yankee fan might belt out an amazing operatic aria that melts the heart of all the Sox fans present and totally defuses the tense situation.

I changed up the tool discussion, with the suggestion I had gotten at Penn State from Cole Camplese- rather than showing the same Dominoe Story in all 50 tools, I used examples from the Tools page they show how these are used by some educators. I did not get to all of them, but my list included ones listed at http://cogdogblog.com/stuff/50ways/salem.html

I appreciate the folks at Salem State inviting me out for the double header!