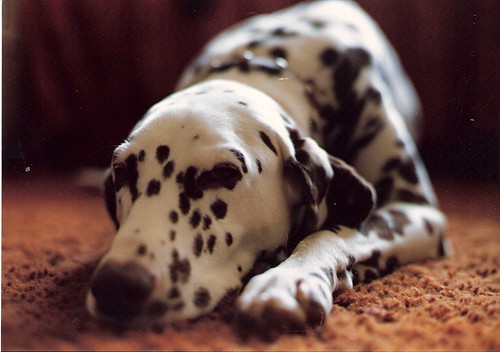 But I missed another major back story part of the story. It was in 1986 when my room-mate Kevin told me about the run away dalmatian that someone found.

When I took her to the vet, he made a wild guess how old she was– he actually said 7 at the time, which later seemed an over estimate since she lived another 7 years beyond that (yes, I know dogs can grow into their teens, another friend’s Weimaraner was like 19). So maybe she did make it to 14.

It’s not like you cut open a paw and count tree rings. Morbid joke there, folks.

But this story is what happened after we made the cross country drive to Arizona, where I was in my first year of grad school at Arizona State University. I had this little studio apartment in Mesa that was plainly, like many other places there, a former hotel that had been outfitted into apartments. ASU provided a list of area apartments, and I landed on the first one that allowed dogs, Anchorage Apartments.

One night into my first Arizona year, I was studying away in my apartment, and Dominoe, who was usually silently lounging on the floor or couch or bed, began making some odd noises. Her hind legs were twitching slightly, then more and more wildly, much more than the typical dog running in her dreams things.

Then she started violently shaking. uncontrollably, mouth foaming. Needless to say, I was first startled then quickly moved into panic mode.

It took a few minutes to locate a phone book (hey, this *was* 1987, all we had on the net was email) and find a veterinarian with a 24 hour emergency line. By the time I called and explained, the event seemed to have stopped, and Dominoe returned to quiet napping.

Like I could return to what I was doing. I had no idea what had happened.

I took her to a vet right away, and with blood tests, they told me she had epilepsy. I only had a vague idea what the disease was for humans.

Indeed, and had there been a web back then, I would have been much more informed — http://www.canine-epilepsy.com/

If you are ready for even more heartbreak, read the story of Emma, another epilepsy affected Dalmatian, and I have to warn you now of the sad ending….
http://internet.cybermesa.com/~dalcrazy/Emma.html

Fortunately, as I found, the treatment for Dominoe’s epilepsy was pretty easy– daily doses of Phenobarbital. One small white pill per day kept the shakes away. Dominoe was on the routine for another 6 years.

Yet, horribly enough, there were 2 or 3 times when I got forgetful on the pill routine, and suffered through watching her go through a seizure that i was supposed to prevent. That cut the worst.

And she suffered more than I, and still loved me.

That is something humans seem incapable of.

Dominoe. Again, always, somewhere in my being she is there.