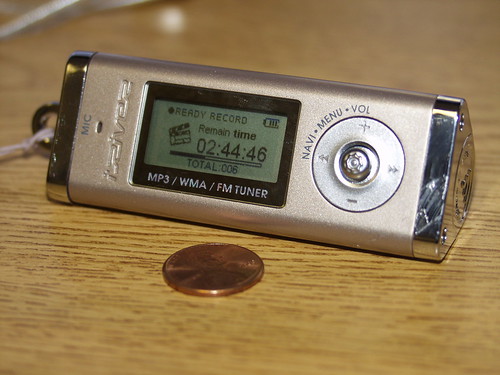 I’ve had a string of audio recorder devices over the years- one of the first portable MP3 recorders by iRiver, another white plastic one I already forgot the name, a great workhorse in an Edirol R-09.

I don’t think I need hardware anymore, though, for basic interviews and audio recording. It’s on my iPhone in the Griffin iTalk app. My NMC colleague Keene Haywood has recommended it after he used it in a pinch to record a keynote session at a recent meeting. I had the free version on my iPhone but had never used it, so I splurged for the $1.99 version, though in retrospect, you can do fine with the free one.

In my test I neglected in important step- put the iPhone into airport mode while recording; the search for wireless can (and did) cause dropouts.

It’s a simple app, like the Flip video camera, there is a Big Giant Red Button to press to start/pause recording 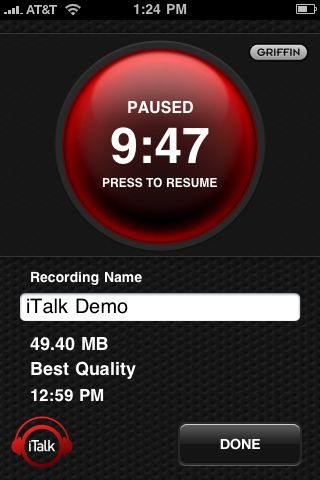 You can choose from 3 quality settings- for something to judge by, I did an 75 minute recording at Best settings (44.1 kHz) last week and it came in at 380 Mb. When you are done, you will want to move the file off the phone, right? We’ll you can email it (ugh, that is like sneaker net), but Griffin offers the free iTalkSync app (mac and windows).

To move files with iTalkSync, you launch the app on your phone and on your computer. The app on the computer detects phones on the same network, and you select which one to connect to: 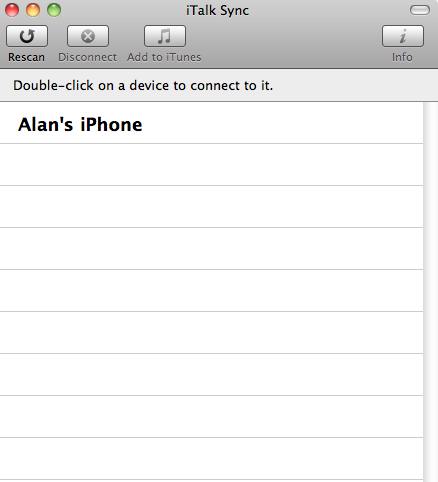 It then sends a request to your phone, where you grant access: 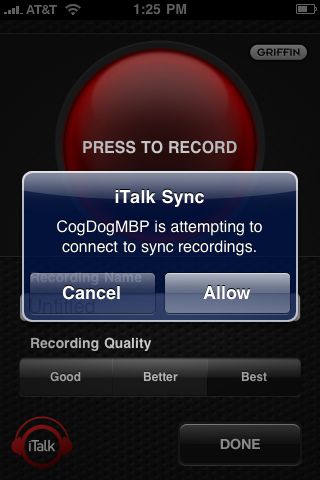 The list of files shows up on your computer in the iTalkSync app, and you simply drag the files that you want to transfer to the computer.

From there, you have an AIFF file on your computer, which you can process in Audacity or iTunes to convert to mp3.

I was impressed with the audio quality for talking right into the iPhone.

Just for grins, I was curious how iTalk would do installed on my iPad. I used the new USB adapter than comes with the iPad camera connection kit, and was able to use my USB headset fine on the iPad, and record this little audio:

However, while iTalkSync did see my iPad as a device, it was never able to connect. That smells like a restriction in the iPad OS. That’s too bad, as it seems like a valid model for file transfer from an iPad w/o needing iTunes, but it looks like Uncle Steve clamped down on that. I had to email the audio file.

I’d still rely on my Edirol for a room recording or one where the quality demand was high (it is also good at recording directly from devices), but for $1.99 (or free0 iTalk does a damn good job on the phone.