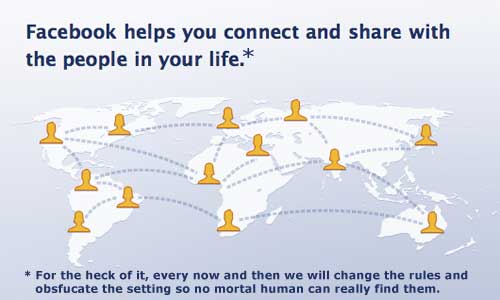 Wouldn’t you give anything to be the fly on the wall in the Facebook boardroom as they scramble to put of the little sparks of fire? I’m not even going to dredge up all the links of people citing why they are quitting facebook, why they are not, why they are begrudgingly staying. I think danah boyd has truly nailed well the issues, which are not just privacy.

Facebook seems like that pathetic story of child with a growth-defect of abnormal physical size growth and not the corresponding intellectual development, hence the big blob of the visualization of Facebook privacy. Yet it’s not just this change, its the lack of awareness of its users on how to even understand what they are sharing, much less find it on a repeated basis.

The Facebook conundrum is that they have created something that is truly easy for everyday folks, cousin Ernie, Aunt Bertha, Freddy the dentist, that annoying kid from 10th grade with the post nasal drip… to do in one place, the kind fo social networking, blogging, photosharing, the pioneers have done on the open web for years. They made it super easy.

I can say that anytime I try to use Facebook to change a setting or enable/disable something, me, an IT professional– I get lost. Its screens are a labyrinth of false turns and dead end hallways. I usually give up. Underneath the hood, it is a spaghetti pile- who can really manage 170 different options to maintain?

Also, have you noticed the typical privacy setting? It starts at Everyone, goes more restrictive, well sort of… and there is no “None” or “Don’t Share” (you have to dig into the Customize option). I guess the notion is, why would you put something on Facebook and share it with no one? But there it is- the Facebook Way (well this year)- you are there to share it all, fool.

But I am no Johnny Come Lately Join the Mob and Bash Facebook- my gripe is more of a niche of my own– how Facebook is stingy with the open web, and I deemed it Stingybook more than a year ago. 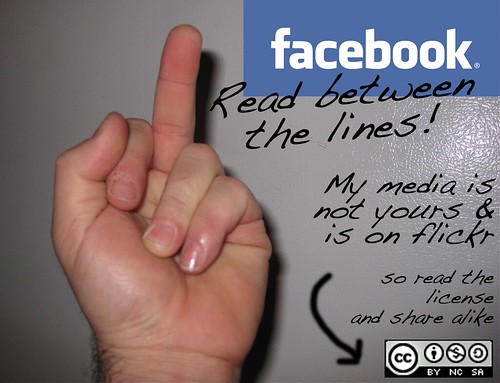 You see that facebook apps allow it to suck in your media, content from outside of Facebook, using open APIs from flickr, Youtube, RSS feeds from blogs- like a giant social media vacuum cleaner, it snorts in all the open media– and does not turn around and allows even the same media to be shared from other sites in the same way. It closes its content to be found by search engines. There was a name for the kid in kindergarten who hogged all the toys. Now we just fall him/her “Facebook”.

I tried a test with that example. My flickr photo is tagged with usage credits that say it must be shared under SA-BY license- share with attribution and it must be shared with thee same rights as the source. Facebook does neither. It has been violating Creative Commons? (I guess the counter is not, since it is my photo?)

But the Content Sucking Facebook really began to get under my fur with this blog. I had set up Facebook (I think), with a Blog Reader app that brought all my blog posts into Facebook (or is it under Notes? who knows?). What I saw was a lot of comments coming on my posts were being posted in Facebook, not to my blog, so there was no connection between comments and the content. I think that is stingy, especially as pings and trackbacks have been around as a working technology for years. Facebook does not want to share back the same way, and to me, craps on the Sharing Golden Rule- Share Unto Others as they have Shared with You.

I also hated that thing where you comment on someone else’s status, etc, and that signs you up for email notifications (by default yes) to everything people post afterward (yes, I know finally there is a setting to turn this off).

Even more so, the stuff in Facebook seems to fall of the bottom of the wall and goes into some no longer to be seen or accessed basement (except for the miners of social data).

My use of Facebook has been pretty low all along. I am among the group that thinks the open web is the only social network we need. I actually did make a move (and tweeted) that I was de-activating my account. Like those who have asked to remove the account, like the gooey sticky floor of a grimy movie theater, Facebook just does not let you go that easily.

I do have one of those staying issues- we have some FB pages for my work at NMC, so I need an account to post updates there. Sure I could create another account.

So I am one of those hypocrites who bash Facebook but don’t kill their accounts. Yet, I have likely 20, 30 other dormant social media accounts where I have a username and something there, but give it no attention or updates. I don;t think a group of techies leaving Facebook will make a dent in its giant pool- it is really built for cousin Ernie, Aunt Bertha, Freddy the dentist, that annoying kid from 10th grade with the post nasal drip… who like it there.

My approach has been to neutralize all the settings I could fine, reduce the sharing to nothing, killed all the apps and group memberships, shut off all the email notifications except a direct message. 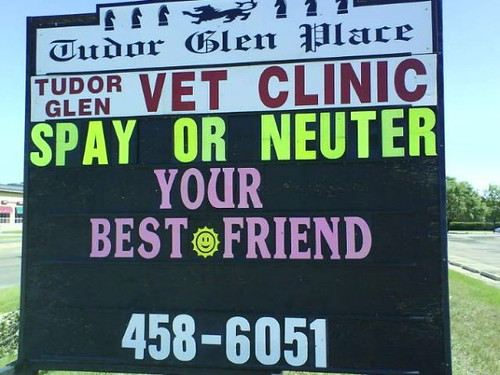 I would not say Facebook is my best friend, but I have done what I could, all 170 options, to neutralize it- don’t call Tudor Glen, try to find your way through.

I don’t place any value judgement on quitting versus not quitting Facebook; I think the bigger lesson is what happens when a simple system overlies something quite more complex and unfathomable. I am not naive to the information I give Google, because Google gives me back useful things, tools, information, yet Facebook feels somehow more sinister, more untrustworthy, more a murky fog covered minefield.

So if you are still active in Facebook, do what you can to help people try and understand what they really are sharing, do what you can to inform cousin Ernie, Aunt Bertha, Freddy the dentist, and that annoying kid from 10th grade with the post nasal drip….