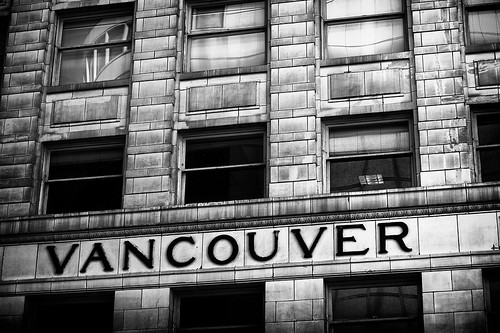 Vancouver is indeed a special place for me. I’ll take any bait to attend a conference there, though no incentive is needed for Northern Voice. It always has been, and even with its growth this year to over 500 attendees, more than your garden variety slap a name tag on my and call me Joe kind of conference.

nferre,Â to bring together; seeÂ confer.]

The Latin origin for the word for this event mentions nothing of bludgeoning by PowerPoint or Conference Chicken, so none of the normal conference stuff that makes my fur itch really happens at Northern Voice.

Proof? Check out the kind of chicken that they served here: 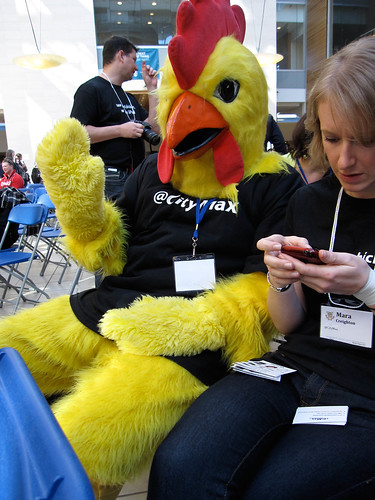 At my first MooseFest in 2006 I remember then the compulsion to try and capture via blogging every bit of the experience– and forÂ somethingÂ I will aim to circle back to– really at that time, blogging was about the only venue of personal publishing. YouTube had been out maybe a year, Facebook was still some ivy league college only private web space, the folks who eventually built twitter were focused on a podcast service. Social media? Blogs were it, beyond flickr.

It was that desire to “capture” that led me to skip a session to blog Nancy White’s session which itself to a series of unplanned but wonderful spontaneous network connections I’ve filed under the “Amazing Stories” category.

This year gets a scattered, I’m stuck in a delay at the airport after a few days in Vancouver for Northern Voice 2010- the Olympic Delayed version. Actually, May turned out to be a glorious time of year weather wise for the conference, which was still at the UBC campus, but in the larger venue of the Life Sciences building. 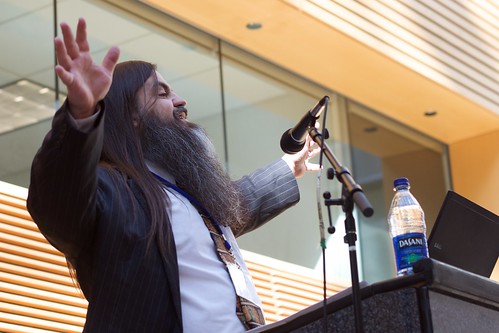 The moose was set loose in prime fashion with an opening keynote by Bryan Alexander, set out in front of a brightly lit 5 story open area of the atrium, Bryan delivered a reverend-like message, going just on voice and force of personality, speaking slide-less. With great gusto energy Bryan poked holes in the fear mongering that surrounds the internet (Facebook indeed can give youÂ syphilis) but equally put a call out to embrace, encourage the positive foce of mystery in storytelling, videos, gaming, blogging, in how we create content. We need more mystery! I agree.

This image above is one of the amazing series of visual notes created on her new iPad by my colleague Rachel Smith, who has posted them in a Â flickr set and is most likely blogging about the experience- check her stuff at http://ninmah.be. Â She ran a great MooseCamp session on what she had learned (having just started trying this at Bryan’s keynote) using the AutoSketch Pro app on the iPad. It’s a pretty goof sign when she has taught a few things to Rob Cottingham:

Credit for Alt.Moosecamp goes to Scott Leslie for raising a fuss when it was x-ed from the program, and then being willing to take on the leadership role when the organizers made room for it. These were fit in the schedule as its own track on Friday, and I sat in on four of them– in many ways these wer my favorite sessions because of the loose format and the conversational mode of the interactions. Rather than presentations, these were really more like idea jams, and to me, did have the feel of the early NV vibe. They were also well attended.

As noted earlier, I did one myself, probably a me talking too fast firehose of how to do a home grown CoolIris web thingie – you can find all the materials and a basic template at http://cogdogblog.com/stuff/nv10/cooliris/. I probably did not really answer the question well of why one would do the hand rolled RSS approach when CoolIris let’s you toss a video wall from a flickr set or just a folder of images on your computer. It’s really that I want the most customization, the ability to write my own titles, captions, and create web links from each image– and that stuff you cannot do by taking the non Robert Frost path in the woods.

It’s admittedly intimidating when a pro like Kris Krug (if you have not seen them, stop reading my junk and look at kk’s amazing Salar de Uyuni salt flat photos from Bolivia)Â Â grabs you and asks to take a photo of him with his photographer mentors, Alex Waterhouse-Hayward and Bev Davies. 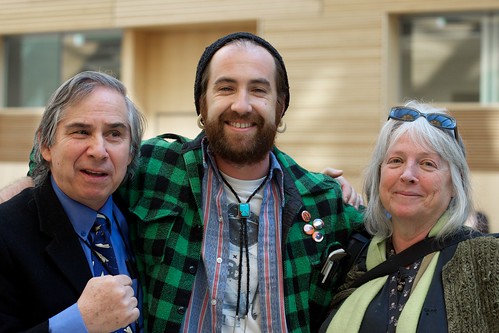 Also, for the nice lady who asked me how to save/run her old Macromedia Director projects, I have no answer beyond buying an old Mac on eBay and doing some screen recording. I have the same problem with my old dead CD-bound Director projectors that wont run on a modern OS.

By the way, Dave Cormier has an evil stare: 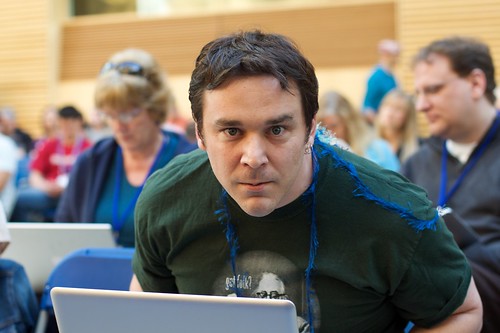 which of course I jest about- it’s a treat to hang out and latch on to the rapid fire ideas that come from Dave.

On Saturday, I had a blast with the “I’m Not Dead Yet-Blogging” session with Brian Lamb and Chris Lott, who both brilliantly delivered a session that had room 1510 jumping in left and right with their input. I tossed up a separate blog post with links and my silly video for that session http://cogdogblog.com/2010/05/10/bring-out-your-blogs/

Another highlight always is the creative hands on sessions that Nancy White offers that gets an entire session room audience out of the room, drawing and creating. She will not put up with anyone’s sigh of “I can’t draw”.

And now, my own blogging steam is running out of energy, and I may give complete shrift, not just the short kind, to the rest of the experience. Ya gotta go there in person for that, as well as the eduglu band jam after conference.

Northern Voice is still the best conference experience I get each year.