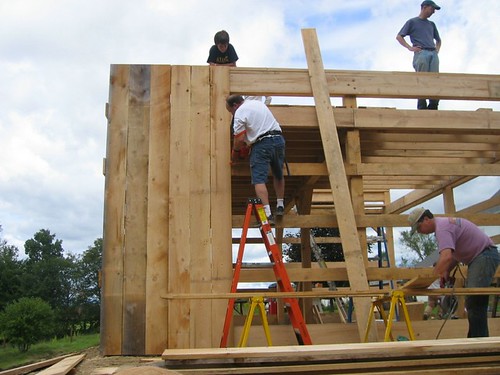 I read this morning via Shareable about a growing movement called “Crop Mobs” – rather sounding as much like barn raising, it speaks to people with a shared interest doing things as groups rather than isolated individuals. As described in Shareable….

In the fall of 2008 a group of 11 young farmers living and working in North Carolina’s Triangle Region got together to talk about issues facing young farmers –things like healthcare, wages, access to land. As they talked, one young farmer, Adah Frase, squirmed in her seat before deciding to speak up. “I’m tired of sitting in meetings just talking about things. It feels like a waste of my time. Why can’t we go out and work while we meet rather than just sitting around a table?”

Frase believed you could build stronger relationships with people by working side by side rather than just sitting around a table talking. Her fellow farmers agreed. “The idea emerged that we’d come together to build community, help each other out, and share a meal,” explains Rob Jones, one of the farmers in attendance that October night. “We decided we’d call it the Crop Mob.”

One more time for emphasis– “I’m tired of sitting in meetings just talking about things. It feels like a waste of my time. Why can’t we go out and work while we meet rather than just sitting around a table?”

This pretty much sums up my feeling of, in our field of education, even education technology, our forms of professional gathering is more sitting and talking about things rather than doing them.

I can here you nodding in agreement, yet at the same time… we refuse to let go of the old model.

I yearn to travel to a place with colleagues were we decided to do something, create something, make things, build stuff. “Workshops” are a bit of a misnomer, you do a little work, but its mostly about an exercise in training, not with a goal of creating something.

Something more like a maker fair. A Hackathon. Do we have too many degrees and philosophical mindsets that we don’t think its worthy to put ideas into action? Too grown up to do what most kindergarteners know is important (being social, sharing, making things)?

One place this seems to be blossoming is at George Mason University- e.g. One Week One Tool:

Generously funded by the National Endowment for the Humanities, One Week | One Tool is a unique summer institute, one that aims to teach participants how to build an open source digital tool for humanities scholarship by actually building a tool, from inception to launch, in a week.

During the week of Sunday July 25 ““ Saturday July 31, 2010, the Center for History and New Media at George Mason University will bring together a group of twelve digital humanists of diverse disciplinary backgrounds and practical experience to build something useful and usable. A short course of training in principles of open source software development will be followed by an intense five days of doing and a year of continued remote engagement, development, testing, dissemination, and evaluation. Comprising designers and developers as well as scholars, project managers, outreach specialists, and other non-technical participants, the group will conceive a tool, outline a roadmap, develop and disseminate an initial prototype, lay the ground work for building an open source community, and make first steps toward securing the project’s long-term sustainability.

Another format busting event I’ve heard a lot of (via the tweetosphere) are THATCamp.

Likely what I am dreaming of would be a bit more local, like the reach of the University of Mary Washingting’s Faculty Academy. What if people with various skills (graphics, coding, instructional design) descended on a selected institution and focused on one project for a week? Revamp their web site, implement an online portfolio tool, set up a word press multiuser service? I dont know what would be done or how to organize it, but I’d bet, that not just the host location benefits, as people would share ideas, learn from each other. 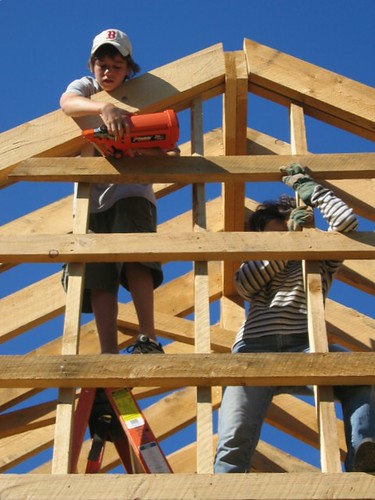 I for one, would be more energized perched on the roof driving nails than sitting in rows listening to talks.