Last week I got an email from someone who works for Millenium House publishers asking for permission to use one of my Gigapan images from Iceland in a new atlas they are doing.

The Earth Platinum Atlast is a big ass book – it measures 6 x 4.5 feet: 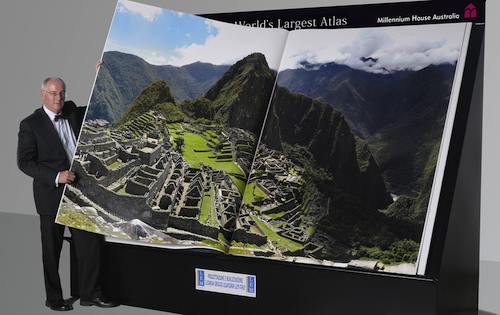 Can you imagine the coffee table you need for that thing? Or the book shelves you will have to construct for it? And what other books can you put on the shelf? How do you read it in bed?

All questions that passed through my mind.

Anyhow, they image they asked to use is actually a panoramic GigaPan scene (made of 88 photos) shot on my last day of my Iceland trip in 2008, at Thingvellir, a place at the nexus of earth history (where the earth is forming new material and spreading towards both Europe and North America) and human history where a parliamentary form of government was formed way back in 930.

I was a bit surprised as this one has some noticeable bands (it was so cold I probably forgot or gave up on hitting the buttons to lock exposure). The person who contacted me said it would be used as a page header banner (so not the giant full page image shown above). I doubt I will get a copy since they are only doing 31 printings of the Giant Book.

But when it came time to ftp them an image, I realized that I did not have a single image. The older version of the GigaPan software did not generate one. I eventually got the newer version for $9 and was able to make an image, a 1.3 Gb TIFF. Before I did that, I decided to give Calico 1.4 a try, a Mac OS X desktop software that is a front end for AutoStitch.

Wow, it took about 5 hours to process– and I was glad I clicked the option for a PhotoShop Large Format image, because it ended up at 6Gb (the limit for regular PhotoShop files is 2 Gb). I managed to open it PhotoShop, and save it as a TIFF, which was still 600 Mb.

It was definitely a better quality image than what was produced by the Gigapan software. However, it seemed to have a hole in stitching near the sun, so I made a cropped version, below is a comparison:

But they said they did not mind the banding and wanted the sky, so I sent them a 300Mb version of the Gigapan created one.

I’ll be eager to see if it still makes the cut- this would be the biggest thing my photos have ever been in.