cc licensed ( BY SA ) flickr photo shared by Alan Levine It’s been quite a while since I created a Gigapan panorama, the last one maybe in June of 2011 in Golden Colorado. A few weeks later I was at Grand Teton National Park, and after tossing my truck, I realized I must have […]

I’m in Golden, Colorado for three days, doing work for a project needing photography of town and interviews with key city developers and citizens. It is a dynamic place full of active people, and the mountains around town provide more than nice rocks to look at; they do seem to be a key component of […]

I had a lot of fun with the GigaPan back in 2008 when I first was introduced to this device. It is a simple but elegant idea- a robot controller tat holds a camera and makes a series of images in a grid that can be combined in software to form a giant scene. A motor moves and pans the camera, and a mechanical arm clicks the shutter.

I’d not done one in a while (my previous attempts are at http://gigapan.org/profiles/5381/). But I was inspired today to get out, and I aimed to hike up Strawberry Mountain, the peak I see from my back deck (behind the real Strawberry) 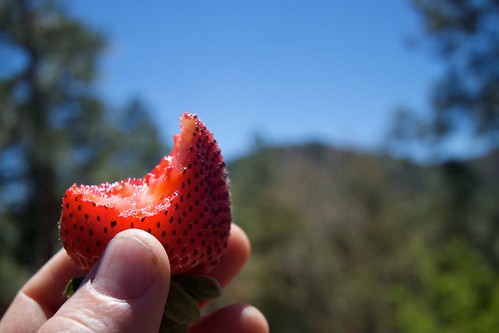 It was a steep scramble up there, and man I felt my out of shapeness. There are not too many places where the trees afforded a view, but I got a decent spot overlooking town below. 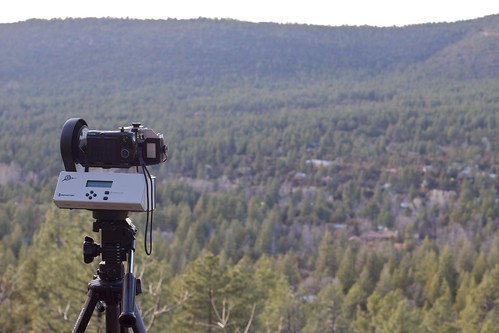 And I was rusty at the set up- it took like 10 minutes to get the tripod level, and for the life of me I could not remember how to set the exposure and focus lock on my little Canon camera. By the time I did, the good light over town was starting to fade, but I gave it a go anyhow, setting the upper left and lower right corners to get a series of 66 photos.

I took a little video footage with my iPhone so you get a sense of what it does:

Last week I got an email from someone who works for Millenium House publishers asking for permission to use one of my Gigapan images from Iceland in a new atlas they are doing. The Earth Platinum Atlast is a big ass book – it measures 6 x 4.5 feet: Can you imagine the coffee table […]

cc licensed flickr photo shared by cogdogblog I took a pit stop on the way to Monterey for NMC2009 to grab some GigaPan scenes near Fisherman’s Wharf. What a lovely clear sunny day it was. First was a shot from the beach catching a lot of the crazy cold water swimmers: Yes, I got myself […]

It’s been a while since I shot or even explored Gigapan, the amazing photo exploration tool that lets you see a wide range of zoom detail in a scene. I have not even captured a scene in a while (see my old ‘pans). But by sheer accidental link clicking from my RSS Reader (am I […]

My photographic and geek bents have been intrigued by learnig (and still learning) how to capture immersive high res GigaPan images, which is fun enough in its own right. This is a combination of a special camera control rig and software that takes a series of images with a standard compact digital camera that gives […]

Since I am just started playing with taking gigapan images, I was eager to experiment with the device on the trip here in Australia. I dont have fancy case for the thing- I am carting it around in the foam padded cardboard box it got sent to me. I am carrying it in my old […]