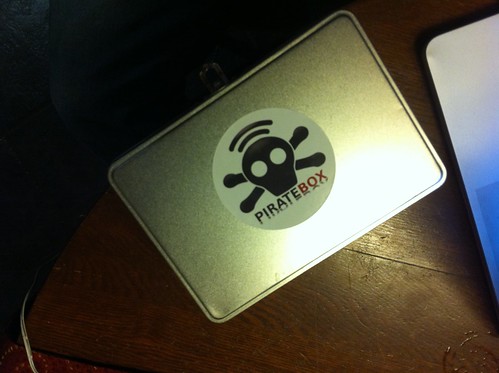 This little case is going to contain an entire four months of shared, gathered experience on my road tour. Built as a way to easily, anonymously share files and chat over a local network (see David Darts hub site for full details). It establishes a public wireless network, but it is not anyway connected to the internet. The whole intent is local file sharing and, as coined in Ars Technica, is an “artistic provocation”

I was introduced to the idea by Grant Potter, who was running demos at Northern Voice–

Untitled from Travis Boisvenue on Vimeo.

But it was the Nosieprofessor who proposed the idea that I would take one on my trip around the country (and that other one to the north) ILTPBHFYTR (I Left This Pirate Box Here For You To Read) even with some rules (some might call protocol). Basically I am taking this where ever I go and asking people to contribute some kind of media that they are NOT posting elsewhere on the interwebs, at least til I return in October. I’ve been fleshing out this idea even further…see below.

The best part is that he built it for me! 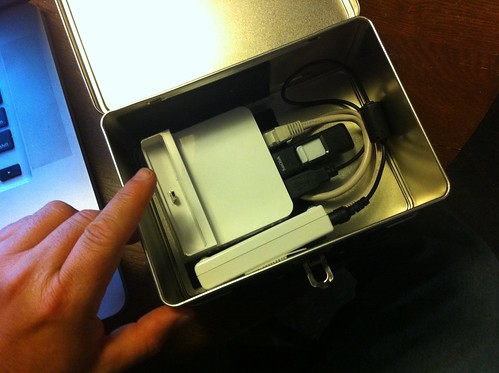 Its a little box with a wireless router and a wireless hub that mounts an entire unix OS and web server from a thumb drive. He was struggling with it right up until my last day in California, but made the breakthrough the night before, so I was able to swing by his house and pick it up.

When it is active and in range, the network “Pirate Box- Share Freely” appears as a public wilreless. If anyone connects, it either right away, or upon any internet action, loads a browser page with the minimal interface: 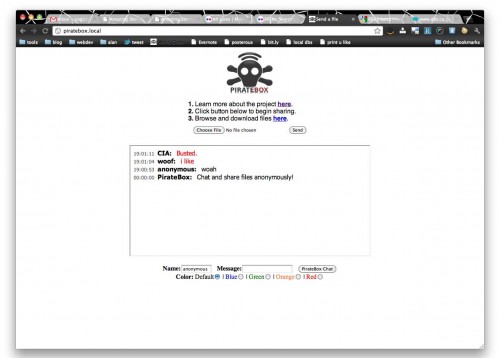 What you can do is (a) upload files; (b) browse/download files in the single directory; or (c) use a public chat. Notthing is logged, so all activity is public/anonymous.

That’s all the technical side of things- I have the box, what will I do? What can I make of a mystery box? 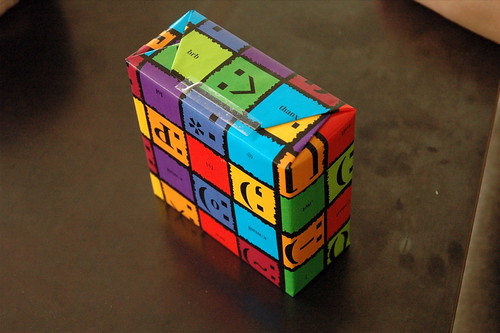 This was the idea I cooked up with Jim Groom when he visited, in fact it jelled on the night driving back from the Grand Canyon, on the darkness of the Lake Mary road south of Flagstaff.

We talked about te PirateBox being like a time capsule- a way to capture the thoughts, ideas, imaginations of people I met (or at least crossed paths with) on this trip, confined between now, or when I start (June 23) and return in October. A key aspect in our minds was that the PirateBox was a real tangible thing, that would move around, but it was also something not part of the giant flow of the internet, yes, it is very much a capsule. 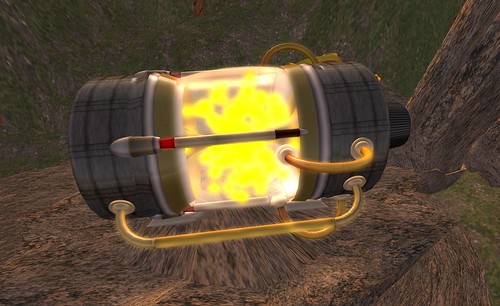 So the question I will ask people is to share something that represents this time to them, how they would characterize it to a future generation- maybe what is most important to you? what are you passionate/hopeful/worried about? How would you capture what this time means to you, personally or as a society… or what is special about the place (town, home) you live in?

What you create is up to you,. but it could be a poem, a written story, a song, an audio message, a graphic, a photo, an animation, a video, anything digital. And as the NoiseProf says, it ought to be creative commons-ish content, not something you downloaded from the net, but something you created, fashioned.

But it ought to be anonymous. The point is not to make an individual message, but to see what happens collectively from all the “stuff” I can collect while out on the road. At the end, I will try and make sense of it. And then it will be shared. I will leak some highlights along the way 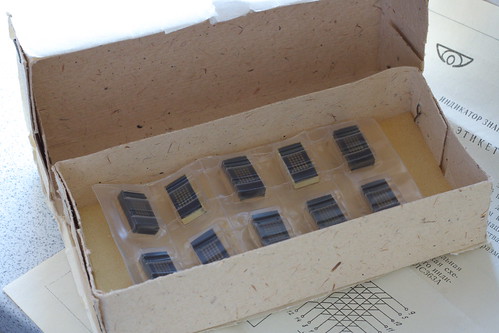 Jim and I also talked about another activity, is as I move around, to set it up, and have conversations about what people see that is already in the box. Maybe even record that, or stream it over ds106 radio.

So while the technology is PirateBox, for my purposes it is a StoryBox, and the story is about this time in our lives.

How can you participate? Well, you can try and be on my route, which of course is not definite, but I do have a map I will update, so you may guess if I am on your trajectory. If you are someone I am visiting, I will turn it on when I get to your house, and ask you to deposit something while I am there. Or you may see it appear in a coffee shop, park, campground, library.

You could send something to someone who maybe can track me down. Or, why not– pop me something in my dropbox? Just visit http://dropitto.me/cogdog, and upload something for my StoryBox (in the spirit of being open, I give away the password- it is storybox. I dont want it emailed. I dnt want to know it was you. I just want you to create (and share) stuff, damnit.

What do you think? In the time between now and my departure, I will codify this into a standalone page as a reference, and place a copy inside the PirateBox.

I hope you will be part of my adventure.