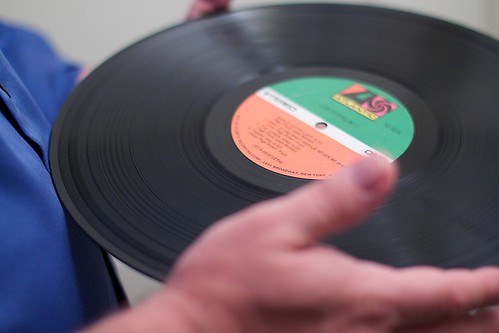 There are too many reasons to list for me to say why I enjoy hanging out with Gardner Campbell one of them being the regular education he gives me in things like how vinyl records are mastered and the real meaning of revolutions. We did all of that the first night I stayed with him at his new home near Blacksburg, Virginia, and I wrm twisted him to have this conversation on ds106 radio. Here’s the full archive, below some highlights.

The first bit of new activity I am now aware is scanning what is in the “dead wax” of LPs. This is where codes are engraved that have meaning to audiophiles, and where the producers often add their own signature in terms of a name or initials. The disc Gardner was eager to play for me was a copy he scored in a Greensboro store of Led Zeppelin II, of which songs I have heard many times, but none like on the system in Gardner’s man cave/ basement. 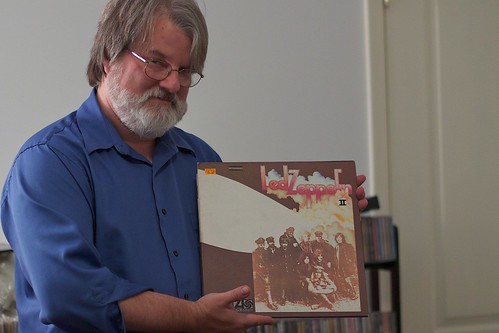 The story is that the original person doing the mastering, Bob Ludgwig wanted to create an album that had a wide range of intensity, so that the depths of the grooves in the album, which generate the sound, were so much that the average record needles at the time would skip. Too many people would return the albums, that the record company got someone else to remaster it, to “tone it down”. Therefore, there are out there, a number of rarer versions of this same LP, with the “RL” initials- the so called “hot mix” masters.

Gardner has tracked these on eBay with prices in the $400 range, so he was excited to find one in this store at all, much less at a $5 price.

So we began the radio session with the full on “Whole Lptta Love” and sat together on the couch feeling like that “hair blown backwards” effect. Gardner gave the full on intensive explanation of how records are mastered, the difference between analog and digital, and what that process meant for the music.

i’m struck by parallels of the Bob Ludwig story. He envisioned, saw, created a form of expression that was too bold, rich for the technology of the time. People could not handle it. So The Man came in and watered it down, made it more palatable for the masses. But that rich experience is still out there, for those who care to seek it, who are willing to flip through bins and scrutinize the hidden codes in the dead wax.

We shifted a bit to talk about his New Media seminars, the two masterings of the same songs (get it) he runs as an undergraduate honors seminar here at Virginia Tech, From Memex to YouTube and the Faculty/Staff New Media Development seminar, Awakening the Digital Imagination. Both of these are structured as participant led discussions of selected papers from the New Media Reader.

I’ve had a chance to participate in both of these this week, and it is inspiring, in many ways for the way gardner leads these from the back of the room… meaning that he gently leans on the rudder, but lets the participants do the sailing. The students had a wide ranging discussion of Bill Viola’s “Condominiums in Data Space” with great discussion of the ideas of video editing as a metaphor for our lives, the parable of the porcupine and the car, and a wonderful shared wondering of Viola’s mind blowing video The Reflecting Pool.

The faculty seminar was covering the two readings from McLuhan, and we ran through the notions of myth, went off on a tangent about syncopation, including a participant clapping and one dancing to demonstrate the concept. We had a ranging discussion of what McLuhan might have meant by “Grotesque” leading to of several places, the wikipedia article. I found this bit to be most fascinating:

In fiction, characters are usually considered grotesque if they induce both empathy and disgust. (A character who inspires disgust alone is simply a villain or a monster.)

One participant put out the question, Would McLuhan have taken on using twitter- his form of compact but denses expression certainly fits the form, and sure enough we devolved into finding his is http://twitter.com/marshallmcluhan. Gardner proceeded to follow and message him.

There’s a lot more to these, but it is an example of how meaningful it is to take time to have these shared discussions, unraveling big ideas, that we would not typically do in the every day course of our “jobs”.

I did ask Gardner who he thought who among contemporaries might be in a future version of the New Media Reader, which he specualted might/ought to include new forms of media (e.g. blog posts, videos, interactives). He listed:

Back to the radiocast, since our friends were listening from the OpenEd11 conference I asked him to share some thoughts there, and you can hear the intensity of his passion when talking about what he experience at EDUCAUSE conference, with Blackboard touting their embracing of openness.

Gardner was appalled at the corporate waving of the “We embrace openness” flags, leading him to issue what I might cite as Tweet of the year with its subtle reference to 1984:

If we allow corporations in this country to appropriate the language of liberation when their behavior has been exactly in the opposite direction, then we deserve what we get. And I’m not going there.

Apparently this led to an un-named Blackboard rep verbally accosting Gardner and not being quite so “embracing”.

Apparently there were t-shirts at the conference featuring words to effect of a “Blackboard revolution”, leading Gardner to speculate about the Che Guevera style t-shirts of “I don’t know who this guy is (but I think he is cool)” 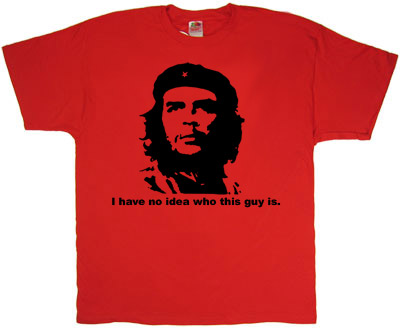 Going on to talking about open education, Gardner said quite a few of quote worthy bits:

The real frontier is open educational experiences, that is not just the stuff, the quote,unquote content, but some way to plug in to and share the narrative of going through this experience. That is why the process of bloggin in education is so important to me. You are not just getting a lecture, a term paper, or even a project, you are getting the story of what it is like to be in that experience.

If you heard Jim Groom’s keynote the next day, you can connect the lines.

And, Gardner also spoke of his passion for having people using blogging to narrate their ideas/ thunking, learning– and being proud of the work being done with a new program he is proud of here at Virginia Tech, the Honors Residential College blogging initiative .

None of us makes meaning of life in a completely isolated way… One of the ways we create meaning in the world is to experience the world with other people. And to do that in a way in which we actually narrate the process, narrate the experience… context becomes a service we provide for each other.

It’s not about writing about learning, it’s writing as a form of learning.

Vinyl and revolutions and blogging- it’s all in the hot mix.