It’s my first day here in Melbourne, a glorious sunny one, and my energy is good given a good long sleep on the 14.5 hours jaunt from San Francisco to Sydney.

And why is it no surprise that all they way from Prince Georges British Columbia should Grant Potter find an interesting thing for me to see here?

His reference to Giulia was her inspired performance at the Sanctuary ds106radio jam last May in Vancouver and she retweeted it my way. My plan was to head there MOnday when I am exploring the city with Rowan Peter.

The article Grant tweeted was not very specific (at least to jet lagged me) which bridge it was on, as there are about 5 within a short distance here. So it was just crazy serendipity when I emerged from the trail adjacent to the Yarra River, came up a stairway, and was staring right at it.

But wait there is more.

Some people were clustered around the back side of it, where a man was fiddling with the computer inside: 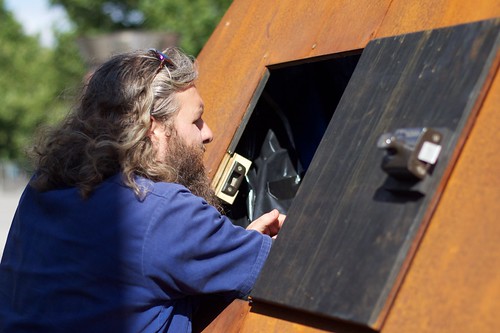 What a stroke of luck- this guy is Robin Fox, the artist behind the Giant Theremin (learn more about the project!

I managed to do a short Q&A recorded to el crappo android phone- he explains that it is not exactly the largest theremin…:

It has a fish eye camera on the pole way at the top, and it captures the movement of people who walk past it, and thus their motion generates the theremin like audio. He says the pyramid shape was solely to keep people from climbing it (which apparently failed to deter them)

I waited around while Robin consulted with a group of dancers who did this performance act:

I spoke to Robin again afterward, and talked about how I heard about it via a friend in Canada- these seemed to really surprise him, and I went on to talk about how I am part of a group that does web based radio, and would be back Monday to do a live broadcast. He gave me his card, told me to text him, and seemed interested in meeting us there.

So hopefully Monday, Rowan Peter and I will not only bordcast the sound of the giant theremin, but hopefully have the artist on hand too.

Now this makes for teh awesomeness. 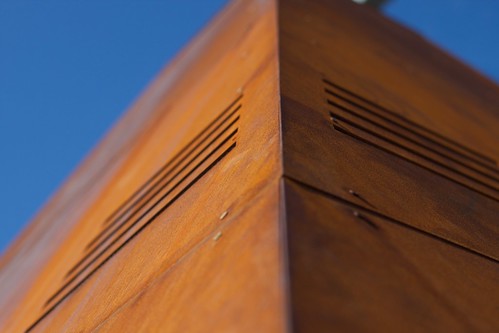 Featured Image: Rehearsing a Performance flickr photo by cogdogblog shared under a Creative Commons (BY) license