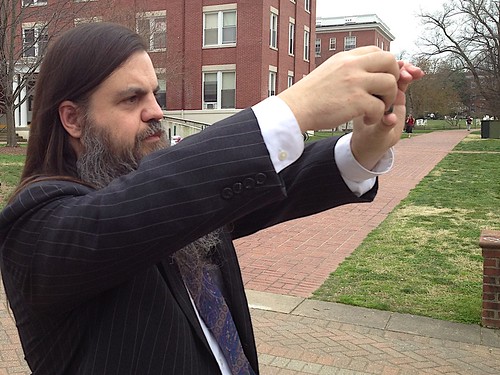 This guy not only sees far, but makes it understandable for us- not simplified, but approachable. What a treat in my first week of work at the University of Mary Washington to have Bryan Alexander come for a 2 day visit. He might be the hardest working educator, in one day he sat in on 4 classes, did a faculty lunch talk, and an evening talk that… is epic.

The latter is what is still reverberating here, his framing of the future of technology not wrapped in technology or politics, but really- culture and life. He asks at the end, “What happens to your life in these worlds?”

His talk was The Visible College: Four Futures for Higher Education (kudos to Andy Rush for running the live video stream and posting the archive of Bryan’s talk)

The opening bit covers the ways in which he and others have looked at the future, forecasting, market simulation, Delphi methids etc. But it is 37 minutes in where he breaks into the discussion of the for futures (none of them mutually exclusive) 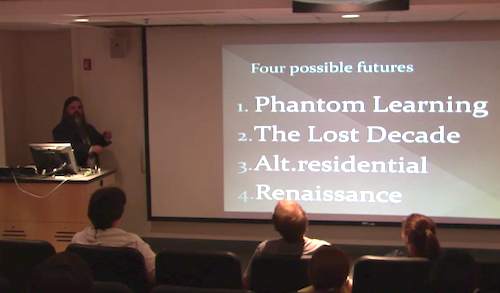 In each he paints the picture, shows us the examples from now that support it, and relates to three major areas- accreditation, libraries, and faculty development. Only one of the 3 is dark (he later says he was avoiding being really dark in this talk), but you do have to acknowledge that these futures largely hinge on extrapolating our current conditions of natural resources, energy, food, water supply etc– not discounting either natural or extra-terrestrial disasters.

In all of them, what we think of as libraries do not fare well, that is libraries as places of storing content; he sees much different roles (and has been surprised not to get a lot of pushback here)

In Phantom Learning, where the learning happens is more “ghostly” extended- as Bryan summarizes

“Rare” as a central place. What we see is a lot more augmented reality and layered information– more things like William Gibson’s locative art. Libraries are media production sites, not repositories.

Currently, the AR interest now is in admissions and recruiting, but we see learning content like
iTacitus where architecture is augmented with a layer of hsitorical documents (reminding me as well of the London Street Museum)

As another exmaple, Bryan points to MOOCs (as opposed to mooks)- massive online classes, now spreading as a commercial entity with projects like Udacity “We believe university-level education can be both high quality and low cost. Using the economics of the Internet, we’ve connected some of the greatest teachers to hundreds of thousands of students all over the world” and as another end of the spectrum, ds106 and Change11.

Bryan points out the future potential of MITx (“certification for a price”) — MIT hopes for one billion users; if only a fraction of those complete their work, that is a significant number.

He says the professional development in this future is via social media (again the abundance of information).

My question still is- the usual line of thought is, if you know what you want to learn, there are plenty of options to choose. But what is going to help people pursue what they don;t know is worth learning? A DIY approach works perfectly when Y knows exactly what I is to D.

This future has a lot of connection to some deep thinking in a blog I am new to reading, the improvisation blog by Dr Mark William Johnson especially notable The history of the education industry: 2020 – 2050 and recently, Rethinking Public Services in which the commercialization of higher education appears inevitable.

The darker of Bryan’s four futures is the Lost Decade, where extended stagnation, lack of employment growth, broken or bankrupt funding for education leads to a time in which groups are left to their own to promote learning. A sign is how Bryan describes “Pinterest shows things people what to buy because they cant afford to do it”.

Bryan predicts a split in higher education between STEM (where there will be some funding for) and the Humanities (where there wont), the New Left- as well as an inevitable rise of “adjunctification” in the profession.

Libraries will be rare, small and professionally development? DIY.

On Friday, Bryan met with a small group of students and There was some fascinating discussion around this future- Bryan’s question was, in this scenario of economic/environmental challenges, how or would they engage in something like ds106. I respected the student’s earnestness in affirming their devotion to creativity- yet I wonder when it comes to a period where the reality of securing the basics of food, water, shelter (beyond a hollywoodification depiction) would there really be much left to put into creative expression? I don’t doubt some would, but this, to me is the dark anti future of the Renaissance (below).

This is only my supposition, and while I am usually the “glass is 1% full” type, to me it says we can take a lot for granted in our current standards of living and affordances now. A true post-apocalypse scene is, I bet, much more grim than the way it si played out in movies.

The third future, alt.residential would appear to be a diffusion of education away from these familiar, truly brick and mortar, locales. Bryan listed online/blended learning as the new norm, and course bundles being even more unbundled/re-aggregated than we might even imagine now. Tenured faculty become more like travel agents in the sense of not be the all encompassing providers, but yeah, those side guides, but now, remote side guides. The role of mentors ss rising role, as are ones in data management.

In terms of collaboration, the clip art of 2022 is not smiling people sitting around a table gesticulating at a computer screen, but people with perhaps mobile devices working together via two way video (heck 3D?) and shared media editing. Remore again here is the enorm, not an exception.

The maker subculture moves into the mainstream.

Bryan noted interestingly the shift for our concepts of campuses, that they cultivate unique physical features that make them essential to different locations

We don’t want the Hollywood version of the campus, we want a specific movie version of a campus.

Like the Phantom Learning future, Augmented Reality Layers come into play here, so a campus or any learning location accumulates an information layer authored by students, and made available for the next year’s entering students.

I’d try to guess that in this future, the campus or institution has more pronounced presence than Phantom Learning, but in both, much less pronounced than today.

The Renaissance rises as maybe the desired future, as Steve Gilbert used to say, A Vision Worth Working Toward.

In 2022, we would have looked back at these ten years as the golden age, a renaissance of creativity.

“Back in the day, heh heh, we used to just listen to music. Now? You are in three bands by the age of 12″

The Renaissance is grounded in storytelling, where nothing is artificial or geekish in creating mashups or animations about your own life’s activities. We get more used to fake identities, we see psuedonyms, and understand them.

This use of Tumblr allows public submissions as the President of the United States “launches a major collaborative storytelling project.”

The power of story runs too long to list, but is demonstrated clearly in sites like
We are the 99percent (interesting that the digital story here is a powerful depiction of an analog artifact, a hand written message) and ranges from everything like Twitter feeds for car tires retelling if history, to times when games are as rich in experience or more than films.

In this future gaming is mainstream, and we recognize already that weight watchers, chores, and not as a new development, school (grades as rewards), are all underpinned by game elements.

Entering a new space of non computer interfaces, we run into challenges like when Siri cant understand Scottish

In this future, accreditation is project-based, studio style learning is common. Libraries again are rare and small. Professional Development is distant and DIY. Faculty multimedia production as the norm, and accepted notions are using “both sides of the api”- people take something from the public space to make, and then share it back in its new form, for others to partake (demonstrated as a student pointed out in Minecraft). Faculty actually get points for using someone else’s work. 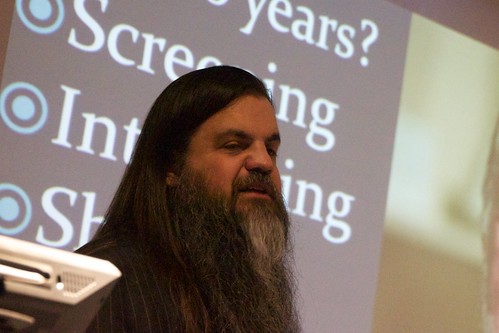 Bryan has give so much in his 2 days here, and in many ways, we are feeling this talk will reverberate as much as Gardner Campbell’s Bag of Gold talk. It’s not like these are separate or fixed futures either, but it was/is a powerful approach to tinker with it in our minds.

Personally it is a treat to be around Bryan- he brings a genuine curiosity, energy, and meaningful connection to every person he talks to. Plus, without drinking coffee, I am wondering what mountain elixer propels him- he is a human dynamo.