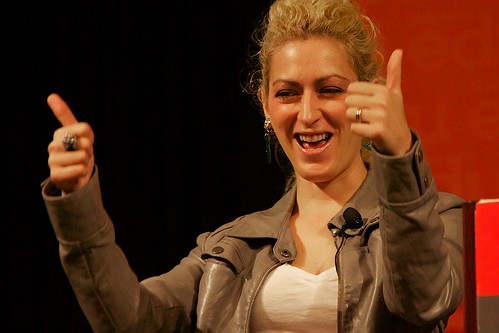 Since I mentioned a desire to flip conferences, I have to say it was worth sitting in the front row of Jane McGonigal’s “Learning is an Epic Win” talk at SXSWedu, and frankly, it was just about the only non “Meh” session I attended. I last saw her speak at the big SX in 2008 and knew she would deliver here. Although she’s likely given this talk a lot of times, you could not tell from her energy.

I’d embed the slideshare set of slides for her talk, but for like the ten millionth time that site is broken. Why are tey still around? Epic fail there. You might find it someday at http://slideshare.net/avantgame

There is an audience hand held video version fo the talk- I think I was just across the aisle from this dude, and I marvel at the tenacity to hold a video camera up for a whole talk

JUst a few key moments I had scribbled down as notes- first of all, in terms of getting the energy up in the room, her activity of Massively Multiplayer Thumb Wrestling was genius- here is my buddy Jason from St Edwards University who went up to do the demo 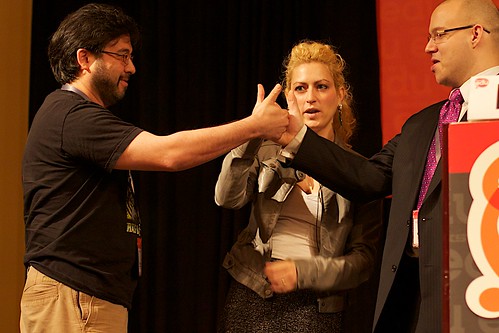 And shortly there after. the entire room was connected into one large chain playing this game. Hey, you should have been there.

She mentioned a Michigan State university study which suggested that youth who play video games show more creativity. And look, the results of this study, done by researchers at a public institution, are locked behind an Elsevier paywall. Game over.

McGonigal used a term new to me- Eustress – a positive kind of stress generated by a challenge or game that produces the same brain/body changes that negative stress does but feels like to us as excitement, and is accompanied by an impulse to help.

I’ll take some of that, please.

She also noted some other research (eek, the source escapes me) that concluded that we improve the most when we fail 50% of the time, this is the level where we can see our gaps on knowledge and can see what it takes to over come it. She compared the model of the new york school that operates by game mechanics, where quizzes are things students can “replay” until they succeed, an opposite mode of the standard test model where losing means game over.

We then were treated to a video that highlighted the work of the New York Public Library Find the Future game, an uber clever concept to motivate kids to spend time and get curious about the library