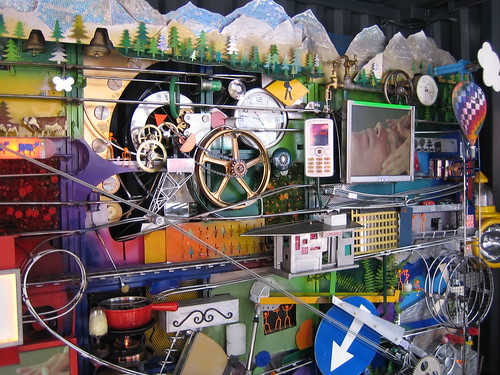 Tonight we unleashed a new piece of the ds106 fleet of sites- the Assignment Remix Generator. This is an idea that was spawned by Tom Woodward way back in December 2010 as a way of instigating remixes of creative work by the playing of a “card” on someone else’s work.

Keep in mind, this was a month before the launch of the open version of ds106, and 6 months before the development of the assignment bank.

The students would get a variety of cards at the beginning of the course and to use them they’d tag the origin post and link to the person they want to be the recipient of the action.

So, maybe I want to take CogDog’s #ds106 aura photography challenge and assign it to someone else to remix as a drawing project. I’d play my “Change Format2″ card in the comments and indicate that person X should do it. They might make something like the design below.

There are lots of possibilities for cards. There are lots of ways this might play out. It might introduce too much chaos but I think it has the chance to change how participants take part in the course. It gives them a degree of control and institutes a degree of randomness that is attractive to me and might be attractive to others. I like how it puts more power in the hands of the participants and changes how they interact.

We circled back to this idea a month ago in a Skype conversation with Zack Dowell where we spoke of the riffing of work in ds106, and the idea planted in my head.

So the idea of the Remix machine is to go from the remixing of media that we’ve had students doing the past two weeks, to the level of remixing the work they have been doing in ds106. The primary part of the machine now is the Generator– it pulls one random assignment from the bank (we have over 300 now), and combines it with one random “remix card“- the cards each describe a different “twist” to apply to an assignment. 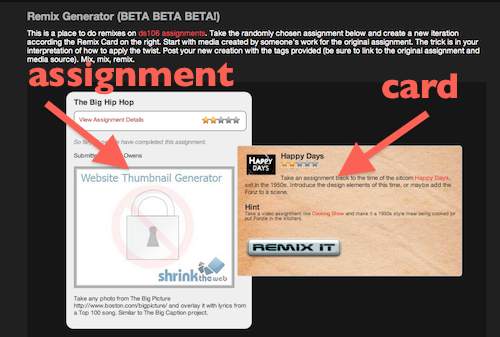 This presents a user a potential combo- if they don’t like it, reload (eventually I want to make it more like a slot machine, and load new items via ajax).

By pressing “Remix it”, the code generates a new content type that offers the combination as a remix page (or if it exists, the button merely links to it).

Your task is to then interpret the combination as a new assignment- and do it. Not only that, we want you to look at the examples that were done for the original assignment, and use media from one of these as your starting point. 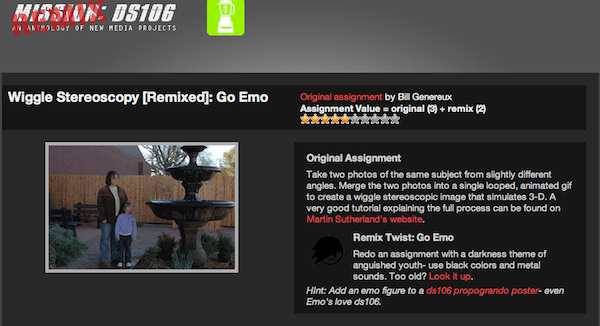 For example, one combination is combining the Wiggle Spectroscopy (visual assignment) with the Go Emo remix card – so the challenge there would be to create a wiggle visual that features an emo type character. To do this I might download the GIF created at http://www.generousworld.net/?p=101 and try to edit it to change a character.

Okay, chances are some of these won;t make sense. But it’s all about the interpretation.

Tonight in class, I introduced it to my students, and had them in small groups find combinations that would work (or would not) which led to some fun class discussion. I also got some good suggestions from them for new remix cards.

This is pretty much in the spirit of building the course was we go. There are a bunch of things to tweak, fine tune, and maybe plug holes into. I want to add a form that will allow people to submit new card ideas.

And going back to Tom Woodward’s original concept, we want to make a “play this” button on a remix that would allow them to email a card or assignment to someone else to do as a challenge. Or we add a “remix” this button to assignments on the main site.

I’m looking for ideas, and feedback on this monster. There is another long post that should be more on the mechanics, but this is all leveraging the genius of Marth Burtis who build the original assignment bank. I had managed to make a copy of the assignment bank site by cloning the key database tables, and making appropriate changes in the wp_options one. I had to create new custom post types and taxonomies for the RemixCards, the remix assignment combos.

I thought I would have to migrate the functionality back to the assignments site to tap into its info, but managed to find the switch_to_blog() function that allows be to switch to another blog database to run queries when I need to tap into the other site.

This has been pretty exciting both to build but also to see how it pans out. The students tonight seemed intrigued by this idea.