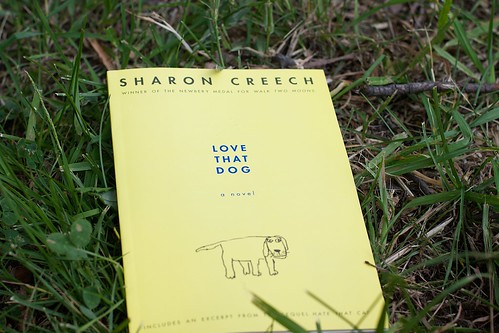 As part of doing some sessions at UBC in June, I got some gift cards to use at the bookstore, and picked up some heavy pieces of literature. That was sarcasm, but I also got a Philip K Dick novel, a mini guide to post structalism (WTF that is that’s why I got the book), and a copy of Jaron Laniers I am Not a Gadget. The main criteria might have been the portability of what i could cram in an already overstuffed suitcase.

Anyhow, Sharon Creech’s little book was perfect for the day in Montreal I hiked the top of Mt Royal in the mid day stinking heat, to read in one setting under a tree. And on a literal level, it is an easy read- a story of entries (almost blog like) written by the boy Jack from September 13 6 through June 6, a school year.

Jack’s tale unveils in his own poetic verse, with the echoing voice of his responses to Miss Stretchberry (the name alone conjures images of the teacher), as he discovers a voice for poetry, starting from:

I don’t want to
because boys
don;t write poetry.

Along the way, jack does write poetry, at first because it is an assignment. We rea din response his questions of poems Miss Stretchberry introduces to class, but they way the author weaves it in is in side the head of Jack. He does not understand the “poem about the little red wheelbarrow and the white chickens” and he says so.

so much depends
upon

beside the white
chickens.

Which has this rather simple imagery and pacing. Its an example where the thing created, be it a poem, an image, a painting, is an opening to thinking what is about, not so explicit in itself, and the reason I like so much the minimalistic assignments we set up in ds106- it is more powerful to say more with less.

And Jack is asked to post his first written poems on the BOARD, he does not want it read allowed, or seen, or be known that he wrote it — doesn’t this ring true to how we find people reluctant to be open, to blog, to let their work be seen?

His response when his teacher asks him to explain the meaning of his first verse is brilliant:

What do you mean–
Why does so much
depend
upon a blue car?

You didn’t say before
that I had to tell why.

The wheelbarrow guy
didn’t tell why.

The fact that Jack is questioning is key. His creative juice is yet tainted to produce when hew think is expected. I am coming across this often in ds106, when often the students seem so focused on just achieving, accomplishing the assignment, that when they blog their work, it is pretty much– “here is my assignment, I made it in GIMP” — what we are having to remind students is that we want to rad more about the idea behind what they made; what are the influences, what is the meaning to them, how does it tie into storytelling?

As one of many examples, see how Mikhail Gershovich starts with what might be an assignment of making an animated GIF about an old cigarette ad his father-in-law starred in, but goes deeper and more into story as he draws us into the connection to the culture of the 1970s and the personal connection for being able to re-interpret a commercial of all things. This is why we need tostand up strong for our rights to re-use our media culture:

I’m also fascinated by how a simple activity of deriving something simple like an animated GIF of a few frames from an artifact of cultural history as Scott and I did can be, potentially, an act of critical cultural preservation. In taking that bit of the ad and engaging it in a new way, I created an opportunity to reflect on its historical context and cultural significance, not to mention the sentimental value it holds for me. There’s great potential here for us digital pedagogues.

Perhaps I have unrealistic expectations for what people will do. Perhaps. Stuff that out the far side of your rubric. Bust that rubric to shreds. Blow it up.

Anyhow, back to Jack, and we see in the process of his year, the entries every few weeks, that he continues the exploration and questioning of the poems Miss Stretchberry (giggle again at that name) provides- and again, there is subtle reference to the poems, not explicit, so we are nudged to dig for that on our own (two from Robert Frost, the first stanza from Blake’s Tiger poem).

Jack’s evolution in writing poems again makes me think about how people evolve as bloggers. He begins to feel more open to having his work in public, even more so when there is some feedback. He begins to riff from the work of others. His writing takes his own form, and then he questions the form he is “supposed to do” (actually it is in the excerpt for the follow up “Hate That Cat”

Although . . . my uncle Bill
who is a teacher
in a college
said those words I wrote
about Sky
were NOT poems.
He said they were just
words
coming
out
of
my
head and that a poem has to rhyme
and have regular meter
and SYMBOLS and METAPHORS
and omomoto-something and
aliter-something.

And I wanted
to
punch
him.

in the middle, and I will not give it away, Jack’s poem about the yellow Dog (sky) is posted, and we understand there is a personal drive for this kid’s creativity. Something beyond an assignment. No give aways here.

And like what happens in open blogging, Jack makes a connection with an outside expert. One of his poems is “inspired” by Mr Walter Dead Myers, and through his teacher, Jack writes a letter of invitation to the published poet– and just like it happens in blogging, the author sometimes not only responds, but connects, and in Jack’s case, visits his school.

Any guesses as to what this experience does to people’s motivation to create?

So yes, this little book about a little kid and his dog poem has me mulling about the parallels to writing in the open, and why we have to knock down this “do assignments to the letter” mindset. We have to make room for students to do and create stuff that matters, not just for points and badges and shit,

That is exactly what happens when a blog idea gets rattling around me head, just like it did by picking up this little tiny book about a dog.

Love that dog, love that kid. 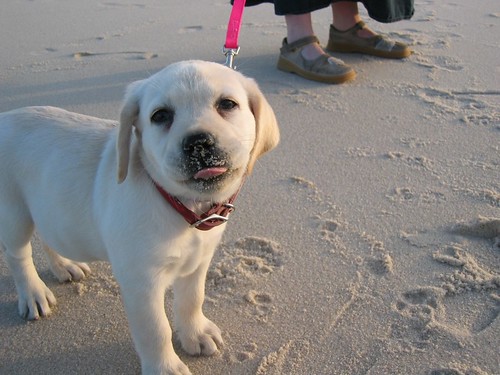