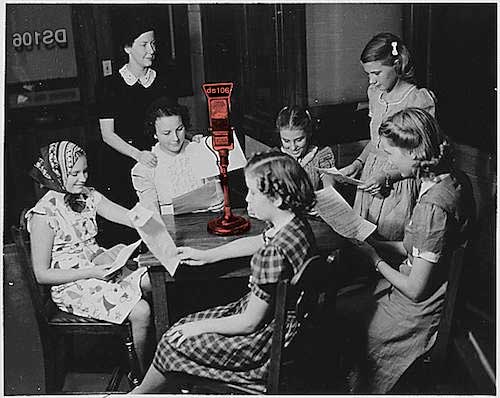 This was week marks one of the highlights (for me at least as a teacher) of ds106 where we do a live radio broadcast of the student audio projects. This is where they work in groups to produce a 30 minute radio show, and is likely one of the most challenging projects. The challenge is not only the dynamics of working in groups, which is compounded by these students being online, but also because doing a good radio show is a lot of work- much more than the audio assignments we have given them for warm-up.

On Monday I managed a 3.5 hour marathon to broadcast 5 groups from my section, and Martha just completed her run tonight. I’ve just finished organizing the archives. These include the posters for each group, plus 3 audio segments- the before show conversation with the group rep, the show itself, and the post show conversation.

We require at least one member of each group to Skype in so we can have these conversations; its a chance to ask questions about their story, the work it took to make it happen, the roles people take.. These turn out to be quite rich in information about what the students get out of the process.

Running these is a mad scramble of managing the audio mixing of sources (shows loaded in iTunes, plus music to play between breaks), rigging the virtual sound channels to be able to pipe in Skype. I love doing this stuff. I used my latest Rube Goldberg setup with LadioCast – with the extra step of running the outward broadcast via NiceCast so I could capture archives. My only futzups were struggling to remember how to Skype to 2 people (wrong conversation was active), and one show where I did not minimize Skype when one of the students had an open mic. Besides that, it worked like a champ. I would break the broadcast for less than a minute between sessions so I had separate archives.

But let’s talk about the shows- this was by far the best quality of audi shows, both in conception of story and execution of audio. A few were a bit more reading than I would like, and some I wish had used more music and sound effects. But compared to my previous rounds of teaching, this was the most success I have seen in terms of the output. I also saw that these groups for the most part were more successful at organizing, some because they chose to meet up (many of them do not know wach other despite being residential students on a small campus), but others because they made use of tools like the Canvas group communciation tools, google docs, and even Google Hangout– see how team RadTASTIC flew with this: 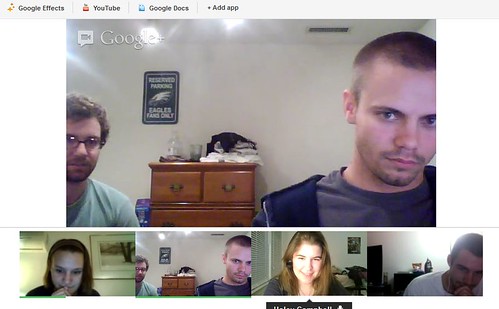 They not only collaborated here, they even did audio editing- Paul screen shared audacity and played back the sound into the mic so his team mates could hear it and make suggestions.

So what I liked:

I regret playing up the competition for listeners, that should nto (and is not) a major goal, and thanks to @DrGarcia for flagging me on that. I did want the students to be invested in getting people to listen, and they did do that, we had audience sizes from 14-27 people, HUGE on ds106radio scale. But I should have backled off the number humping. I had planned to give extra credit to the team that got the most, but he latter groups do have an advantage as momentum builds up (though the last group did sustain a large audience despite the draw of mocking the election debates). Since I think they all succeeded in this regard, so credit shall be spread across the board.

Martha and I made some changes that I think helped to improve the process.

I am fairly sure this spreading out of the schedule was an important factor.

We are having the students this week listen to the show from another section, and do a review of it (as well as applying the criteria to their own show). It is also an experiment to allow students to help author the criteria for judging the quality of the projects- asking them to list question to get at “What makes for a good radio show?” I am planning to hold off the grading of the groups so we can factor in the reviews that other students make.

I’m jazzed, stoked about how this all went! The radio is a powerful vehicle for storytelling, and working in audio is something that seems to get lost in all the multimedia rush. Making you laugh, scream, empathize, feel creepy from just listening to audio is a positive outcome.