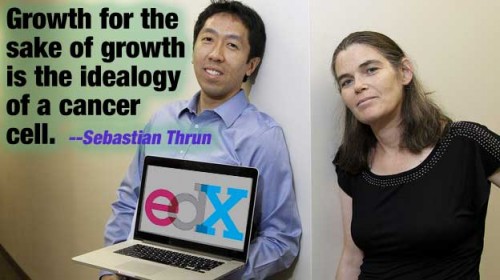 It was time tonight to do some ds106 design assignment, this time a Triple Troll Quote. the classic ds106 assignment game of mixup and mis-attribution:

Find an image of a well known figure, add to it a famous quote by someone related in some way to the figure in the image and then attribute the quote to a third, related figure. From the official site: How It Works 1) Get a picture of someone people idolize. Obi Wan Kenobi, Barack Obama, Captain Kirk “” any beloved public figure will do. 2) Slap on a famous quotation from a similar character from a different book or movie. Pick something close enough that a non-fan might legitimately confuse them. If you’re using Captain Picard from Star Trek: The Next Generation, for example, you’ll probably want to grab a quote from Star Trek: Deep Space Nine, Babylon 5 or Battlestar Galactica. 3) Attribute the quotation to a third character, from yet a third universe. This way, nothing about your image is correct, and you’re trolling fans of all three characters at once.

So what the bleep is my image? I snuck in a Quadruple! This all started with a tweet by Audrey Watters following some twitter banter about Mitt Romney’s debate remark about pawning of Sesame Street to China:

The mention of Edward Abbey got me thinking about one of my favorite quotes of the irascible desert rat urban curmudgeon (I miss the words he wrote so much):

Growth for the sake of growth is the ideology of the cancer cell.

or a later iteration

They cannot see that growth for the sake of growth is a cancerous madness, that Phoenix and Albuquerque will not be better cities to live in when their populations are doubled again and again. They would never understand that an economic system which can only expand or expire must be false to all that is human.

And this lead me to thinking about the hysteria of Massive Online Open Courses and it all came together.

So for anyone who actually might still be reading here, the mixups are:

Cause as we all know, massive has nothing to do with growth.