There are the paths of links that maketh up the web and then the paths of experience that make up another web. Sometimes it just gets tangled up in a ball of serendipity that really is not all that important in the long run, yet still tickles me.

Today’s ds106 Daily Create was contributed by one of my #ds106 students:

#ds106 #dailycreate by @LyndseyLu112 eXtreme edit. Take a photo, then edit that photo to the eXtreme http://t.co/mMFugS3f

so I was compelled (self compelled) to make an effort. 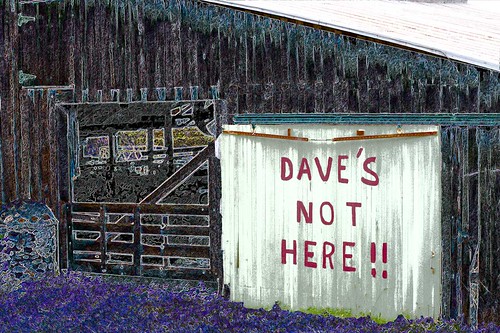 I had combed through recent photos trying to find one that was not already full of color, hard to do when you get to witness the glory that is Autumn in Vermont. The original photo was one I took on the way here, in north central New York along highway 20 somewhere east of Buffalo: 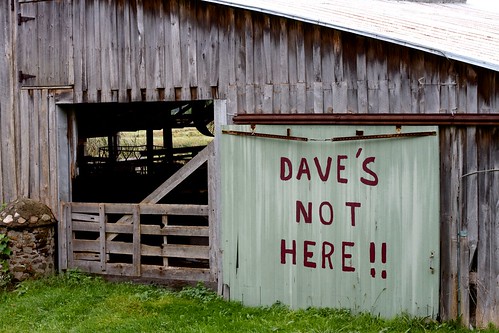 That was one of those things you see that you slow down and hestitate, “is it worth the stop?” YES! screech U-turn.

Not all that imaginative, but the Daily Create is part doing and part thinking about it.

And the phrase took me back to my own memory link of a few months in the early 1990s that I spent in New Mexico, pursing what I did not know was the end of of PhD career in geology (another story). But someone local had told me I must have the green chile cheeseburger at a place called “Dave’s Not Here”

If I recall correctly, I ended up taking my step son there, so I do have a witness.

Back up and down the Google train, I get a more colorful history at Gil’s Thrilling (and filling) Blog– this looks like a key resource for funky dining reviews in New Mexico, by the way.

It’s got great photos of the (now closed) joint, and after properly glorifying the green chile cheeseburger, adds this gem of a description:

Dave’s Not Here is delightfully, quintessentially Santa Fe, embodying the “City Different” attitude. The ambience is Hog Farm hippies meet the Santa Fe Art society. Two walls are dedicated to an exhibit of pensive photographs from Cuba and while the menu doesn’t include any Cuban entrees, salsa with a vibrant beat resounds from the restaurant’s speakers.

Dave’s isn’t necessarily easy to get to if you don’t know Santa Fe well. It’s off-the-beaten-path in a residential neighborhood, but once you’re on the right street headed in the right direction, you can’t miss it. The exterior walls are tagger graffiti meets art deco.

And a comment from a guy named Mike goes on to fill the mystery in a bit more:

Thought I’d comment since you don’t know the origin of the restaurant. It’s not a myth or a gimmick. It wasn’t always called “Dave’s Not Here”. It used to be called “Dave’s Diner”. Dave was the original owner and my parents knew him in the late 70s and early 80s. He had some legal trouble and had to leave the place, hence the new name. It’s really sad the place is closed. It was a part of the local history as well as a great place to go eat since it was overlooked by all those glitzy tourists that ruined my home town.

I’d like to think me in my late 20s torn shirts and bad jeans did not put me in the “glitzy tourist” group.

What does this all mean? I spend an hour wandering down some web alley of randomness?

I love this web. We are it. Keep it weirdly connected.

Even if you are not here.