UPDATE June 19, 2013 Since twitter has killed their version 1 API, there is no longer a public RSS feed provided for twitter activity. Expect new solutions to emerge, one that is usable now is this method from labnol to convert the new JSON feeds to RSS using a Google Script. This method works in FeedWordpress.

Leaning towards the bigger end, I have been working to set this up for the ETMOOC thing Alec Couros (and about 90 other people it seems) are launching soon. It’s been a great chance to stretch some WordPress chops with FeedWordPress in place for the syndication engine.

Below I outline how I created the site that is archiving the #etmooc tweets – http://etmooc.org/tweets

The ETMOOC site itself is set up as a WordPress multisite (using directory structure for additional blogs). The main site is set up with a basic Twenty Eleven theme with a big bold header. I have set up two additional sites, one the Hub or syndication of participant blogs (I’ll write ore on that one later), and the one I just tinkered with yesterday set up as a site to archive the tweets tagged #etmooc.

It makes sense to theme these two sites in a similar fashion, using the header from the main blog, I edited it to add title,a nd some graphic fun. I was thinking of first using some of the twitter bird graphics, but took s swing into the flickr creative commons, and landed on a great image I have used before: 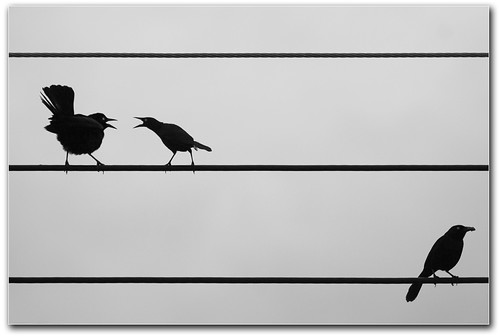 I cropped it a bit, cranked up the contrast, and moved the bottom line and bird to be level with the top ones, as one long line with birds on it – this played out nicely:

I have to start with a decent graphic ;-)

I enabled the Feedwordpress plugin; it is really just being used for one feed for the twitter search result on #etmooc.

Now twitter does not make it easy to find the RSS feed- its out there, but not very accessible. From past experience, I knew how to construct the URL

For more on this see The Socialable How to get your Twitter RSS feed using this simple hack. 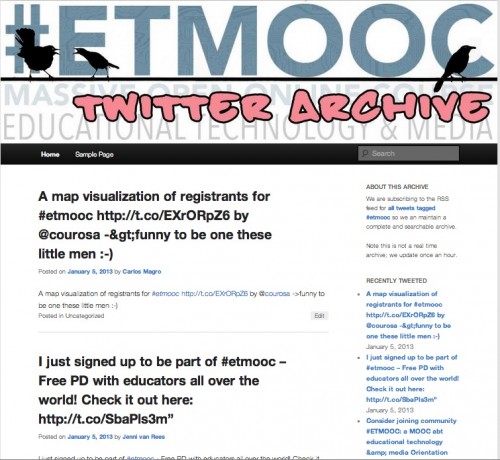 My first idea was to try the WordPress P2 Theme which made for a slightly better output, but I could see confusion as theme is really meant to build a twitter like environment in WordPress (which is neat and useful) but mixes things up as it has a post box at the top. Plus, the icons would be blank as they represent the faux user accounts Feedwordpress creates. I thought about doing some theme hacking, but it seemed to make for a more cohesive site to make a mod of the Twenty Eleven theme on the main site.

It would be basically just using for output the title of the RSS feed, since that is the tweet, and maybe parsing out the twitter user name to make a link.

That seemed doable too.

But it was when I was out for a walk yesterday that the idea sprung on me- that was both easier coding and a better output.

You see in the recent versions of WordPress, they have built in a series of automatic embed technology, so if you just put a URL on a blank line for a flickr page, or a youtube page, or in our case, a single tweet’s URL– wordpress will automatically turn that into an embedded media when published.

So if I have a highly meaningful tweet at say

Just added to my blog, I get

The best CHEESEs are (and all CHEESEs should be reimagined) as massively and constantly synchronous. #CHEESECON13

So here is the thing, the URL for every tweet we get arrives in RSS as the link value, and when published via Feedwordpress is technically the permalink url for the post.

My light bulb was I just had to rewrite the wordpress loop to just use that and the function that does the embed (the capability can be called from PHP).

Any time I do a mod of a WordPress theme, I set it up via the approach of CHild Theming. This means I make a new theme that just overlays tiny changes on the “parent” theme, but I never edit those files. Ideally this helps if themes get updated, as you can just update the parent, and thecghild inherits the changes. In practice, I cannot say I have ever had an issue where a theme stopped working and required updating. The theme I use on this blog is at least 4 years old.

It is however, just better code practice to theme in this manner, Especially as I am going to have to make two versions for each of the sites I use.

The basic idea is to create a new folder for my theme, I call it etmooctweets at the same level (/wp-content/themes) as the parent. The only thing you need to start is a styles.css file which creates the relationship:

The name here listed for Templat is important as it identifies the parent theme by name, as is the @import statement which just says “load all of the CSS from the parent”). This means your site gets all the style sheet info from the main theme.

Any CSS you add can override to augment this CSS, so you just put what styles are different. The screenshot.png (a 320px wide PNG) file is handy so it provides a preview in the theme viewer area.

Now the real beauty comes in when you decide you need to modify a theme file, say a footer template or a page template. You just make a copy of that from the parent theme directory, five it the same name in the child directory, and it replaces the original. So instead of editing the core theme files, you make modified copies.

I don’t know about you, but to me that is genius.

It takes a bit of knowledge of how themes work to take the next steps. The core of the site is driven in the index.php template, where The Loop resides, which is where WordPress iterates for doing things like showing the 10 most recent posts, or all posts in a categoty, etc. You find this in Twenty Eleven, but the work is actually parceled out to another template:

The work for each post it prcesses is done in another template, content.php The original has all kinds of stuff we dont need- it posts the title, the content, the author, date published, tags, categories, comments… For what I need to do it turns out to be grandly simplified:

Basically, the only thing output is tossing the permalink (which is the link to the tweet) into the wp_oembed_get() function and echoing the output.

I came up with one more modification- we are going to collect thousands of tweets, and to make it easier to go page back in time, it helps to change the default navigation from “previous/next” to something that allows you to access any set of ten tweets via paged navigation. I installed the Prime Strategy Page Navi plugin, and added the extra CSS it needs to my child theme’s CSS.

So next I copied the index.php template from the parent theme, and replaced the occurrences of

I changed some of the CSS to make the selected page black background, and the hover class to be a bit more obvious.

The last idea I wanted was to have the site display the total number of tweets it has archived, namely how many posts it has published; as awlays WordPress provides a handy function for this. I added it below the new navigation code:

The CSS class allows me to do some styling.

So now the site is rocking… 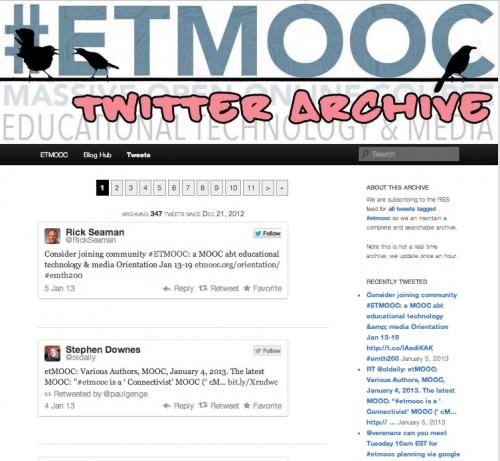 It looks good, but now I see problems. You see FeedWordpress by default refreshes once an hour. If there are more than 20 tweets per hour, we will miss some. For now I am cutting the time to every 10 minutes, which is technically a bit abusive of RSS requests.

In the long run, fetching tweets by RSS is doable for a medium or low activity search, but #etmooc is going to have hundreds of tweets. I’m thinking for an improvement O might have to figure out how to access the twitter API directly, where I can fetch up to 1500 at a time.

In the meantine, I have set up the amazing tool created by Martin Hawksey to archive tweets in a Google Spreadsheet. His genius is that it updates itself, and there are bult in tools to summarize and generate visualizations of the twitter activity.

I have a copy of that spreadsheet running now for ETMOOC. I am thinking an easy way to populate the Twitter archive site is just to update from the data in that spreadsheet, e.g. publishing the summary as a CSV, and parsing that for new tweet URLs.

There are always things to tinker with…