Today’s Daily Create may have been the hardest one to date- “Use camera panning to blur the background behind a moving subject” – the idea is to use a relatively slow shutter speed to take a photo of a moving subject. If you pan the camera at about the same speed as the subject, you can achieve a great effect of it being in focus, but everything else is blurred.

I don’t think I’ve ever really pulled this one off before, and my streak continued today.

And that’s the point.

I shot about 25 exposures of Gunner, the dog I am watching. He loves to chase tennis balls, so I tried all kinds of vantage points of tossing the ball and trying to get him to run by my field of view. The first challenge is throwing a ball with my left hand and holding the camera with the right. This was about the best I got: 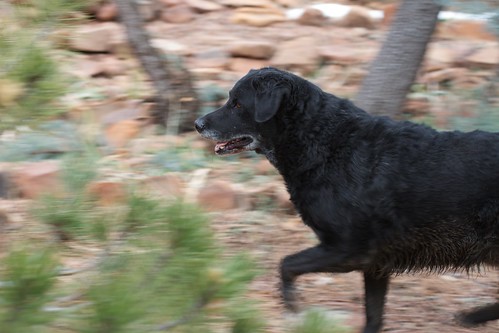 But the other ones, blurred and all, were interesting because they had a real texture that looked more painting then photo, perhaps because of the background texture of the granite gravel in my yard. I had two of them in sequence, and flipping between them in Aperture like a flip book, I heard that whisper… “make it a GIF. Do a GIF”.

So what you see above is just a two framer. it was kind of jerky with the darker background and the top, so in the second frame, I turned on the lower layer (which was the first frame), and started erasing out the background top of the second image, so more or less, the background stays fixed. It still feels herky jerky, but in two frames it does capture the motion of a dog chasing a ball, all in som abstract land of fuzzy details.

I could not really find an animatedGIF assignment that fit, so I am sort of turning Hurry Up and Wait inside out to be Hurry Up and Run