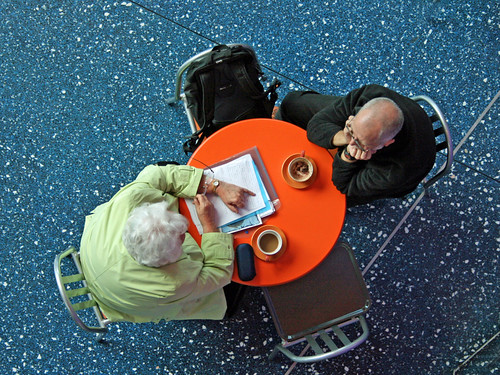 In what I’d call the semi-porous community (because we have people outside the class who can and do provide feedback to students) of my ds106 class at University of Mary Washington, nurturing a healthy amount of commenting has typically been a struggle against inertia.

One might have to make a case that the act of commenting has value; frankly, I start with that as a given. If that is a question for someone, I would guess they’ve not been participating in these spaces.

We would lump commenting on others blogs as part of a participating credit. As a teacher, I am pretty much at least scanning all the blogs and have a gut sense of who is being active in commenting.

But the last thing I want to be doing, and asking my students to do, is something like “you must make 5 comments per week”. That seems so petty to be counting, and sends a message that its some sort of thing to do to get the 5, not to give feedback.

Last semester I tried (in one week’s assignment) a challenge for all students to work to get at least 5 comments on a post that week, thinking it would shift some responsibility on them to solicit feedback. There was marginal success, but it did not carry on to the next week– because essentially it is reduced to a chore. It resonated with a message Lisa Lane wrote recently as The Perils of being Mean (my emphasis added):

The attitude perpetuates the dependence of the student (and professor!) at a very basic level of rules and obedience. The prof is now playing the low-level game of carrots and sticks, as if we were training dogs instead of educating citizens. At no point can we engage the larger issues of why one should follow deadlines and be responsible… I’ve already made the point that we need to treat students like responsible adults, or they won’t behave that way

In past classes I have heard feedback that reading 24 other blogs is overwhelming. Jeez, I know that! Showing them Google Reader helps some but misses the point.

With my current class, a new experiment is paying off- in week 3 I used our Canvas LMS (which I use mainly to enter grades), to randomly assign my students into 5 “comment groups”. The idea is I would ask them to comment on the 4 other students in their group.

Because reading 24 other blogs is a lot to ask, you are going to put in smaller groups of 4-5 students, set up in Canvas, so you have a smaller number of blogs to review this week. Your task is to give every member in your Comment Group at least two constructive comments, on any of their blog posts so far.

You will have to figure out either how to find the blog addresses of your group. You have at your disposal:

Now a constructive comment is more than “Nice work” or “I like that”. It should be a few sentences, and ought to include useful feedback or ideas for improvement. Think about giving the kind of feedback you’d hope to receive.

And when you get comments, reply if it merits a response. Think of this as a conversation (one sided conversations are not interesting, right?)

Your credit for this week is not based on counting the number of comments you made ““ but how you are able to summarize your comment activity. Include in your weekly summary:

One of my students did raise a key thing- if someone waits until Sunday night (when work is due) to comment on her blog, she is not able to summarize what she received. But I did not want to force a fixed deadline (make all your comments by Wednesday), so I suggested that work out the timing dynamic in their group. And that I would not penalize someone if they had an inactive commenter in their group.

The idea was they would work with the same comment group for 2 weeks, then they would have a new group based on their choices fior the mid semester group project. So the comment circles would get mixed up.

I also repeatedly remind them of the key value of using twitter as a call for help, a shout out for their own work, or sharing someone else’s.

Maybe it is the small size of the groups, or maybe I just have an exceptional class (and I do), but I am seeing more constructive feedback going back and forth than any class before. I see signs of cohesion on the groups.

And best of all, I am not tallying comments.

I am also seeing the communications bleed out more via twitter, as students are offering answers to each other. It is here they are extending out of their comment group circles.

I enjoy looking at other peoples blogs, especially when they have something more to offer… Like knowing what they’re doing? Which is always. My comment group is incredibly helpful, especially in commenting and helping me out along the way. However, I also realized that help is not limited to just my group. Instead, everyone finds a way to help especially on twitter, which only further confirms my belief that twitter was the best thing invented since sliced bread. This week, I think I visited Jennifer’s the most often, and my favorite thing was how she gave a play by play in everything she did. It made completing my own work much easier since, if I had any questions, they were likely resolved through her own work. As always, Amber, Kelsie, and Sarah were incredibly helpful in their comments. Also, back to twitter, I was struggling with fixing the time settings on my blog and fellow classmate Nancy Belle helped out.
http://ds106.alittleallovertheplace.com/2013/02/11/listen-close-listen-carefully/

Lots of feedback this week, on both twitter and the blog! As I said earlier, I had the opportunity to change my five sound story to make another, stronger one the second time around. I also added a little post of my own on the other group member’s blogs so I didn’t have to search through all the lists of things on the right of the main page”“seemed to be a big hit! Then of course Professor Levine gave me an even better solution of just putting them in the sidebar (my initial thought, but I couldn’t figure it out). Also got a lot out of Twitter this week, even from people not in my class!
http://ds106.cwyrough.me/weekly-summary-4/

I love looking at my groups blogs and seeing what kind of ideas that they came up with for all their assignments. I found it kind of difficult to come up with ideas for this weeks assignments, so looking at them for inspiration was fantastic. I found looking at their ideas to be invaluable in helping me come up with my own ideas. I also continued to get some encouraging words from my group members this week. I am really glad that we started commenting and keeping up with each others blogs. I also am thrilled to be in group that I am in.
http://ds106.brittanydray.com/2013/02/end-of-audio-week/

My comment group members are SO awesome!! I listened to Amber’s radio bumper before I made mine and I was a little intimidated at first {because she’s a pro, nbd}. But then I read her post and it gave me a little confidence. I hopefully gave another group member some confidence by posting this comment quoting Ira Glass when he talked about feeling your work isn’t “up-to-par” with other people’s work
http://ds106.missrunnerbug.me/2013/02/can-you-hear-me-week-4/

For comments on my blog I feel that these are a great way to keep in contact with everyone in my group. I didn’t receive much criticism, and this is probably my own fault in that I was late getting my weekly summary up! This will of course not be the case next week! But for now the positive re-enforcement is always encouraging. I really feel that it is helpful looking at Leahand Kaitlyn’s blog whenever I get stuck on a particular aspect of the weekly assignments in that they are typically two steps ahead and have figured out how to do the assignment already! Its nice to know that I have the ability to contact them when I have questions or look to their blog when I need direction.
http://ds106.chachachelsea.com/weekly-summaries/ds-106-weekly-summary-4/

I want to get better at this because I think peer feedback and interaction is very important to success in classes and life in general. I have learned from my group mates and hopefully they are learning from me too. When I wasn’t sure what the audio storytelling assignment wanted I was able to go to my group members blogs and see what they did. This helped me understand and expand for mine.
http://www.ds106.owlbereading.com/2013/02/11/trying-to-keep-up-with-owl-this-work-week-4/

The comments have actually been very helpful. I’ve learned a lot from reading other blogs and incorporating different ideas together. For example, I could not figure out for the LONGEST time how to use audacity and cut everything so I took a look around and saw that Lara’s post on the radio bumper gave me a simpler explanation than my Google searches. I also used twitter a lot this week to talk to people. Even thought Nancy isn’t in my group she saw my tweet about ds106radio and helped me out!
http://ds106.savethepandas.net/2013/02/11/what-audio-telling-me/

Not going to lie, I love my comment group. Everyone’s been super helpful and great at giving feedback. Miss Amber was distraught over the broken iPhone screen I posted for one of my daily creates (sorry!) while Miss Jennifer and Miss Kelsie made me feel a lot better by saying that my ds106 work isn’t crap and that I shouldn’t compare it to other people (thanks guys!)

One interesting thing I saw in someone else’s blog was actually a daily create by Miss Kelsie on a broken ring. For some reason, I thought this picture was really sad. Not just because it’s broken (and it’s jewelry! I hope it wasn’t expensive!) but also because rings are supposed to signify eternity (since it’s a circle shape/continuous). I also thought it was interesting because the daily create was to take a picture of something broken literally or figuratively and this photo could be interpreted both ways (broken in the literal sense and also could signify a broken relationship in the figurative sense). So cool!
http://ds106.sarahpark.org/2013/02/10/week-4/