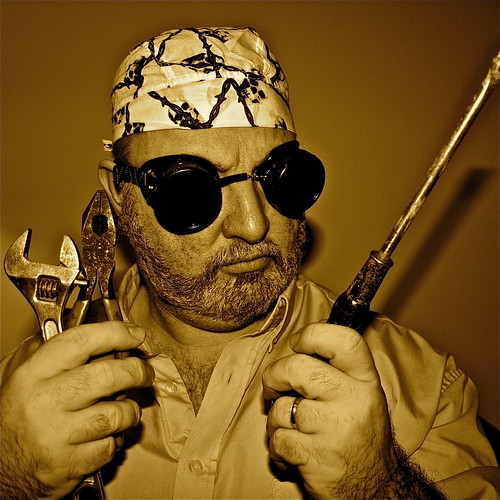 Long ago when I was working at Maricopa, I called our computer repair department to fix some issue with an Apple computer. I was a bit incredulous when Bill the Repair technician opened the case, and whacked the hard drive with his screwdriver, calmly closed it up and said, “that should do it”.

Except he did fix it.

That’s how I feel like my coding method goes.

Sometime in the last few days (I know it worked Wednesday night), flickr changed something slightly in the divs and class names of te sidebars on their photo pages. To everyone else, they see nothing different, but for my humble flickr cc attribution helper script, any change to this structure ruins the script’s ability to find where to insert the attribution text.

If I was s bit more savvy with DOM and XPath, I might be able to avoid the dependencies now I have on page structure, but until then, when this happens, I have to find the right screwdriver, and whack the code til it works. Thanks to Jesse McLean (and someone else earlier) who mentioned the script was not working

@cogdog hey Alan, I tried to remove and then reload the CC attribution helper on chrome, didn't seem to work, any advice?

I’ve been able to update the greasemonkey script for firefox- you should be able to update by installing from http://userscripts.org/scripts/show/49395. Chrome users, you will first have to remove the extension and then install again from the Chrome Store (Also on the list is to figure out how to set up an update option).

I can validate it works on a number of photos I have looked at in Chrome and Firefox, this is for a photo I just posted tonight, and the attribution script is in the lower right again: 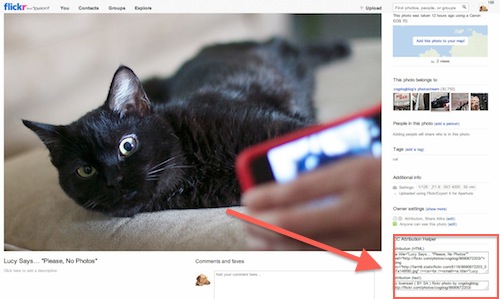 If it does not appear for you please send me a message via twitter, sometimes there are some combinations of page options I miss when testing.