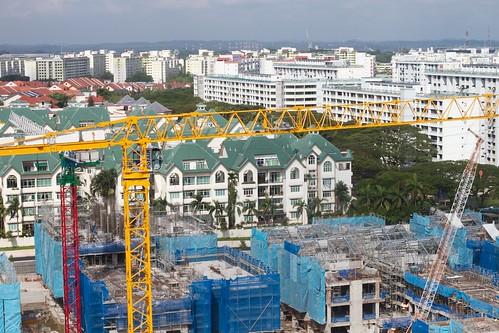 Time keeps on running past me, teasing, “Nyeh nyeh, you are BEHIND on blogging”.

Now it is closing in one a month since my 3 week jaunt to parts of Asia, and huge tracts of land remain uncharted. Like anyone is complaining.

Anyhow, the second leg of my tour was a week in Singapore, a first time visit. I have to admit some super geography ignorance. When I knew of the trip invitation to go to Japan, I said, “hey I am in the neighborhood, why not go visit Jabiz Raisdana in Singapore”. 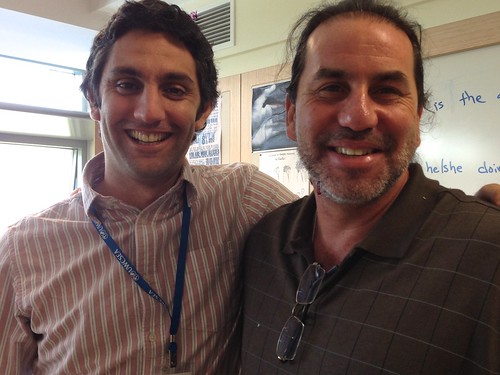 Long time blog friend, and having met once in Shanghai, I kind of missed the fact that it was more then 3000 miles, a 7 hour flight from Tokyo to Singapore. But I got there (despite some adventures with a late night arrival and a cab driver who could not seem to find the gate to the school).

But next day, I was there in Jabiz’s classroom, a vibrant setting I had only seen in his blog words and flickr photos. A huge thanks of appreciation goes to Jeff Plaman and Caroline Meeks, who really were the ones who coordinated, arranged my trip, and lined me up with a full schedule of sessions at UWCSEA. 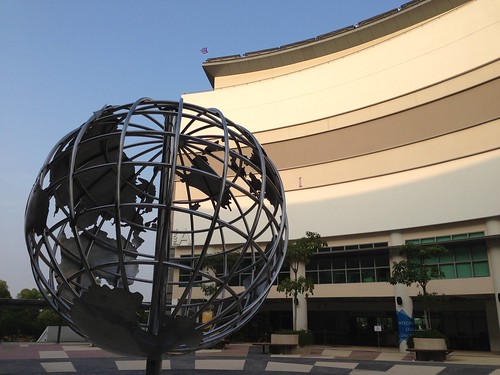 The first day was meeting bunches of people, like Jabiz’s teaching partner, Paula Ginto. Both she and Jabiz are running with amazing student blogging projects, with the twiat that the blogging is not assigned; students are pursuing their own interests. As teachers they are following way more blogs than I manage in ds106, heroic! Jeff gave me a tour of campus, and I really enjoy meeting Katie Day, the school librarian. She was a big help later with suggestions on what to do on my free day, a librarian is never going to come up short with information.

There was an afternoon brainstorming meeting with a few grade 1 teaches to talk about ideas for storytelling with kids. My first presentation was an evening session with teachers and parents. Jeff asked me to combine a few things (bits of Enquire Within Upon Everything), but do some on issues of learning in a networked world. I brought in some bits I had done with We, Our Digital Selves, and Us (invited Online keynote, 2012 Flat Classroom Conference):

Out in the Open Range from Alan Levine

On Wednesday morning I met with a few administrators, who wanted to talk about ideas they had for digital portfolios (apparently well developed for middle school, but not much is done for entering elementary school kids). I think we came up with an idea of kids entering middle school to create a video where they can talk about, show their elementary school artifcacts, and maybe have them do that when they leave middle school. I was reminded a bit of the 7 Up documentary where 7 year old kids first interviewed in the UK in the 1960s, where interviewed again at 7 year intervals.

the afternoon was packed, a talk with 8th grade FIB (Foundation International Baccalaureate) students about “Developing a positive digital footprint”. I updated some stuff I had done at UMW (with a start from work by Martha Burtis):

There was a tech issue with the projector in the room we were in, so I had to go slideless for this one! I talked as much and ended up walking around the room. The kids seemed to like the off the rails format. Then a session with grade 2 teachers where we bounced around ideas for storytelling activities. And another session with middle and high school English faculty on Making Compelling Digital Stories.

As a typical example of that the presenter gets something out of the session, when I was talking about the Storytelling IN the Web assignments we do in ds106 (e.g. the Three Wolf Moon T-shirt), one of them asked me if I heard about the guy who did his resume as an Amazon web page — that is now in my mix of storytelling examples. This happened more times than I can remember.

In the evening I got to do one of my favorite sessions, Looking Through The Lens, where I try to share my love of photography and hw cameras can be a metaphor for learning. The audience was a great mix of some students, parents, and teachers, and one ringer- Dave Caleb who is a superb photographer with an almost finished ebook on photography (check out his amazing light painting photos).

Then there was an (here is that word again) amazing dinner on the patio by the sea, and a chance to sample the Singapore Black Pepper Crab – did they know a Chesapeake bay crab hound was in the house? 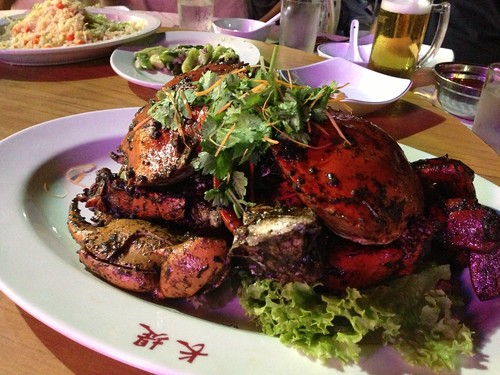 The third day started early, an open discussion with some eighth grade students just starting their personal blogging. There was an informal tech sharing session with Jeff and the other Digital Learning Coaches. 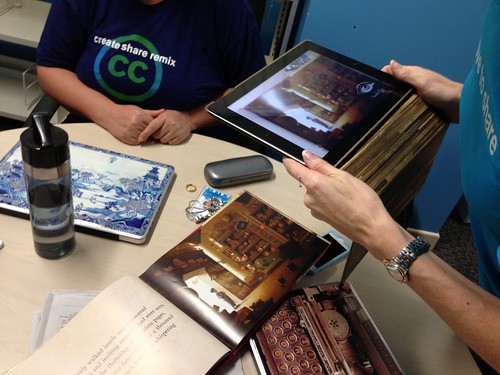 Like here where Keri-Lee Beasley shows me a book I am sure kids go crazy with– The Fantastic Flying Books of Mr Morris Lessmore. The iPad app here generates media associated with the story as you move about the room.

Next was an open discussion with high school students in Chris Huntington’s class (he an accomplished author of the novel Mike Tyson Slept Here, I ordered my copy and am just starting it now). It was sort of Alan tells a bit about his start in the early days of the web- (in which I feel old), and we moved more into open questions of privacy, copyright, culture. It was one of many times where I heard from kids that it’s not “everyone is into Facebook”– there are quite a few kids who actually spend more time in tumblr, where they can “play” more and dive into their interest niches; also many of the kids are into taking photos of themes in Instagram; a,d there was a group of boys I recall from a high school class in Japan who were all into reddit.

I had an informal meeting with Courtney in their communications office to talk about social media, and then ended the day with a 2 hour storytelling presentation, this time with teachers from the Dover Campus of UWCSEA and a number of teachers from the Singapore American School.

After three days of barely leaving campus, and with some guidance from Katie the librarian, I got a half day of exploring Singapore, visiting some temples in Chinatown, and walking to tho waterfront.

There was a dude who seemed rather overtly interested in my ds106 t-shirt, maybe he thought it was Sonic Youth? Nah, he was trying to hustle me into his tailoring store and sell me a suit. I did him get to say the ds106 radio catch phrase: 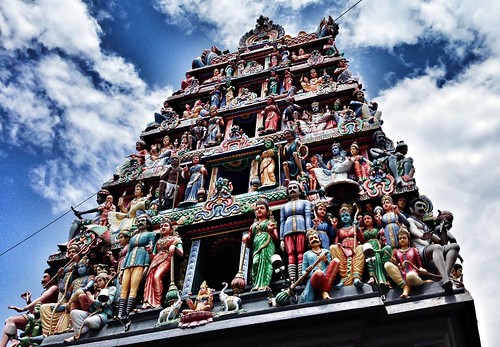 I did manage to find an appropriate place for lunch.. 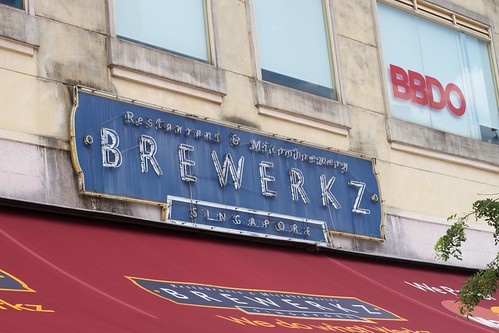 And then I made my way across town, or island, to get to the Shanghai American School, onto meet up in person with someone I’d known online from the early days of blogging, Clay Burrell, who teaches Chines History at the high school level. It was a treat to get to school in time to sit in on his class- beyond drinking tea and learning somethings about Taoism, I was struck by the almost jocular, probing, and kidding manner Clay has with these students, reminding me of how Jim Groom is with his university students. Like Jim, Clay uses this approach to get them to raise their own bar of participation.

A group of students joined us later for a discussion of many wide ranging topics at a “Hawkers” place, one of the open air ethnic food courts that Clay spends a lot of time yet. The articulate and insight of these high school students really was astounding, not for what they knew, but their experience, their outlook, and their honesty on a long list of topics.. beyond school.

I hing out for two days with Clay, and got to see a lot of the local community near where he lives; there was one day of walking and jumping about on public transit where I am sure I did not see one other westerner. He had to do an errand at the motor vehicle bureau, and I got a great photo wander around an industrial area, and just happened to walk into a Chinese temple near where we agreed to meet. A man was explaining the symbols and an older gentleman picked up the conversation. He introduced himself as Mr Chee and a Taoist Master 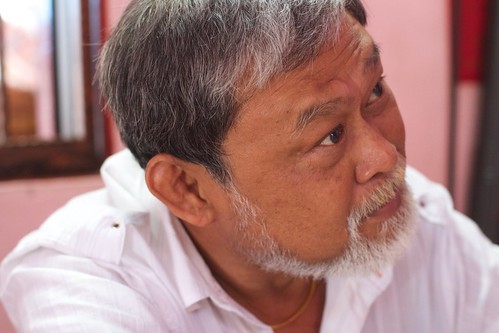 I remember this one thing he was talking about the way of life he lived.. I cannot get the exact words right, but it was more or less, in all situation, it is as simple as always seeing a positive side. This has resonated some (not enough) and I did think if it ins a few travel situations where I might have gotten frustrated (ahem US Airways, that was earlier), and managed to let the frustration slip away.

The irony was that some if the things Mr Chee was talking about were what I heard in Clay’s class, so when we met up in a cafe, Clay was rather excited when I said I had met this Taoist Master. We returned, and spent another hout conversing, even getting a bit of a healing treatment 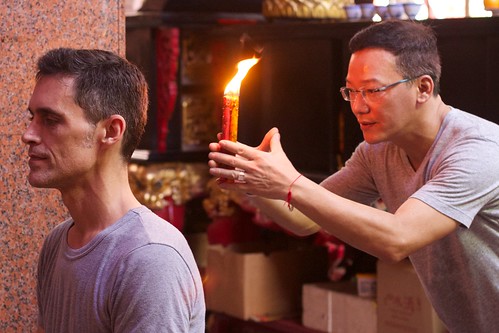 That afternoon I took the public rail system back into the city center, and wandered a bit of Little India, and onto a strange flea market where there were piles of everything you could imagine, like all the pocket cameras that are left aside 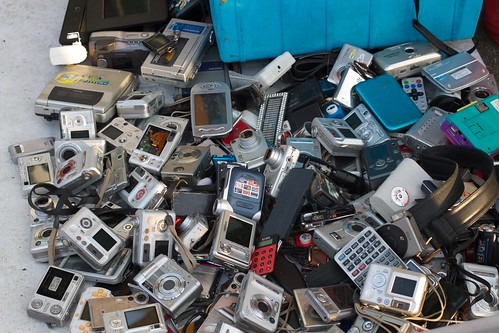 I met up with Jabiz for a great dinner at an outdoor cafe. We went back to his place, and had a later night screening of a movie he had raved about and said we should watch together, Sound City. Produced by Dave Grohl, it tells a story of an unseemly place that produced some of the most powerful recorded music of my era.

It was a great evening hanging out, too bad I had to leave at like 4:30am to catch my flight! I missed getting to meet his daughters. 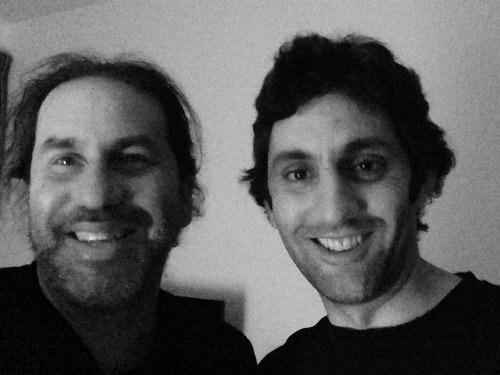 And that was Week 2 of 3 in Asia. And I left out probably more than I remembered to tell here.