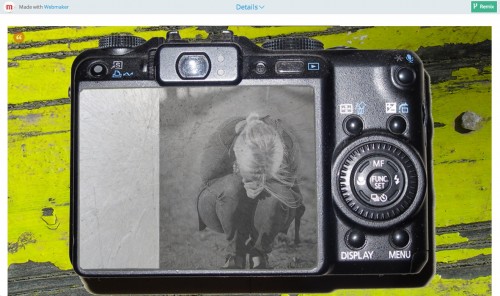 What story do images on a found camera tell?

This is my second of makes as a Mozilla Web Maker Fella, my first was the Thimble creating yourself as an ingredients lable. I actually was intending to do another idea in popcorn, and was just checking out an example Brett Gaylor shared to understand how you can embed a set from flickr.

I was thinking about what I could do with pulling images by tags, and somehow my mind wandered to one of my favorite old school web based digital stories, one Bryan Alexander introduced me to back in 2004, called I Found a Camera in the Woods.

Originally posted in a web discussion forum, it seems like just an honest report of someone doing exactly that and sharing the photos found on the camera, like Ho Hum, here are some photos…

Last week, I drove to a nearby town. The town was surrounded by tall hills and mountains, and you can have a very pleasant hike down any of the numerous trails there. Anyway, I was climbing one trail and enjoying the good weather when I saw what looked like a silver box. When I approached, I saw it was a digital camera!

It’s a 3.3 megapixel Powershot S20! Slightly scuffed, but otherwise fine. It rained the next day, so I was really lucky to get there when I did. When I got home, I also saw it had a 300 megabyte hard drive inside! This must be about a Â£250 value folks; I pity the fool who dropped it so carelessly. Anyway, just wanted to share.

But when you more closely examine the series of photos, it suggests something perhaps more sinister having happened to the camera owner. the whole idea of trying to fathom a story of a series of events solely from what is recorded on the camera is the kind of open ended storytelling I love the most.

So I decided to make a version of this in Popcorn, with a series of images being generated by a few keyword searches in flickr for the images. IN the Popcorn version, I created a series of prompts that are held at programmed pause points, so someone remixing might then compose their own captions in the text areas provided.

Each time you load the popcorn, you should get different photos. I made my own remix, and it turned out to involve a strange red headed woman who teased two vacationing boys with dreams of riches.

Actually the concept fails, because when you load my remix, you see a different set of images from the ones I had when I made it. This means that the captions created should not be captions or literal, and you should try to write something that might work with different images. Or it means my make is stupid.

To get this to work, I had to build a layered frame in Photoshop. I found an image of the back of an old camera (and totally missed the licensing, I have asked the owner to approve my use of his image).

I selected the area of the screen and deleted it to make a “hole”, and then layered an upper layer with a shattered glass texture on top (set the opacity to 59%)- we want this to be mostly see through as it is going to be saved as a background transparent PNG. 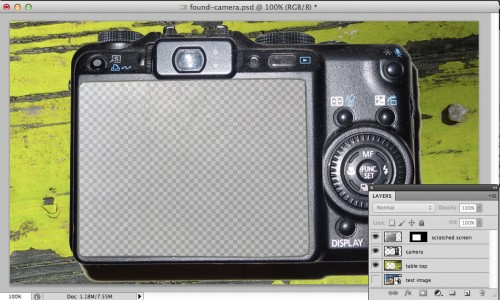 In my first test it worked, but saw that I needed to size it exactly to the dimensions of the Popcorn frame, so it would completely cover the “stage” – an weird size of 857 x 481px. I thought it would look better sitting on a surface like a worn pinic table, and found this nice image in flickr 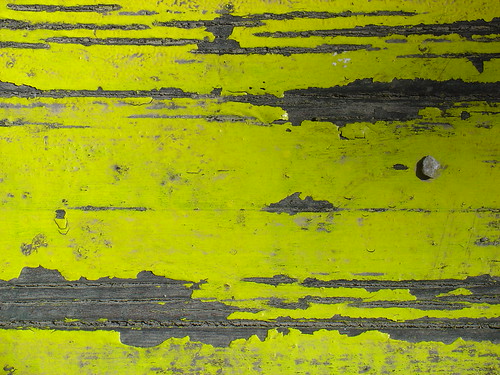 which I added rotated and transformed a bit (I magic wan selected the original background from the camera photo to delete it). I like how that little pebble sits off to the right.

In my Photoshop file, I added a bottom layer to test the effect, where I wanted the images that would come from flickr to be a bit muted being on a found camera’s dirty screen: 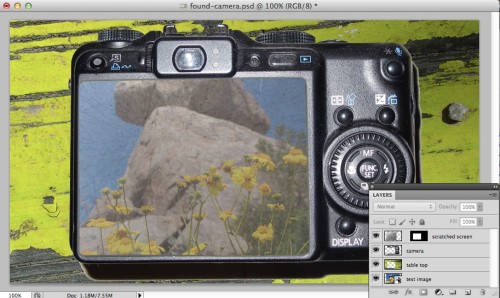 Testing the layer effect in Photoshop (click for full size)

I hid this layer, and then saved the file as a PNG (you can get a copy and use it for something else). The source Photoshop file is also available (4.3 MB PSD)

So now we are ready to build in Popcorn taking advantage there of layering the tracks. 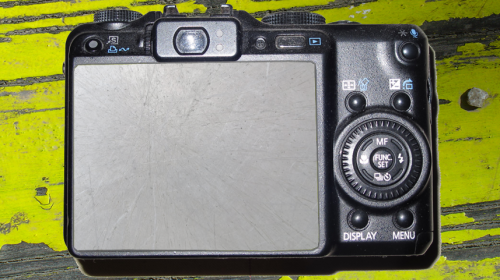 The top layer are captions someone would add in remixing. The next one are the popups, used as prompts, then we have the camera layer asking as a mask. Below this are a series of flickr slideshows using tags. Because they are behind the camera PNG, the only part you see are the transparent bits of the camera screen. Clever eh?

Picking the tags to search on flickr is of course tricky. I wanted to have it have a slightly darker or mysterious progression, so the key words I used are: 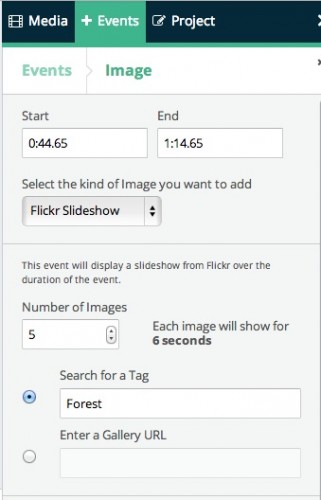 I generally used 5 for the first 3 sets, and put 10 in the last, but shortened the duration.

You can of course, insert different tags if you do a remix.

Below these (which are it visible in the screen shot) is a video layer where I use two Youtube videos (with the video turned off) for music background. In the bottom track are pause stops for the viewing guide. When remixed, I would remove these so it plays as a smooth video.

This was fun to work on, and using images and music works better in Popcorn rather than trying to push it as a video editor. I really like the Mozilla approach to making the remix features front and foremost, and one can dabble just by opening a project and changing settings.

At one time I imagined a newer version of this where rather than just a phone that was found, it was a smart phone, where one might program in all kinds of hints of story fragments- contacts, emails, maps, 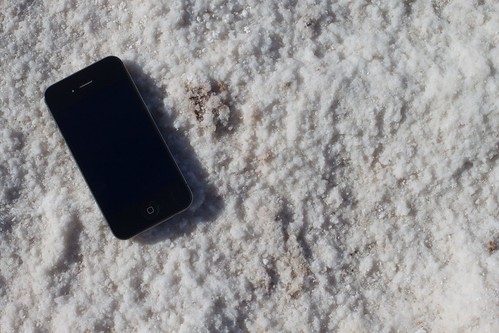 But there is something more creative about just constructing a story from found images. I had a try at this last year, with a camera found on a train

But that one had a happy ending.

Please give my Found Camera a remix try! and if you do, please tag it #foundcamera