Oops, I managed to write this and did not publish. And I say I never save drafts when blogging. Never say Mever!

It’s been a while since I added anything new to my True Stories of Openness site.

The stuff happens all the time (and not just to me), but lacking some event where I get to present it, my attention wavers. But the thing that happened a few weeks ago when a flickr photo of my Dad’s old drafting table ended up on the cover of a Biology research journal, was crying out for a video. I shot this in about 20 minutes (most of it fiddling with getting the right angle on my iPad to record) and did maybe an hour of editing…

And now it is on the True Stories site as well.

To repeat, this was a thing that was in the basement of the house I grew up at in Baltimore. I found out that my Dad used it in the 1950s when he completed a program that was done as a correspondence course, yes my Dad was a distance learning in the early 1950s.

The thing is I never got to talk to him about the experience; what I know is through my Mom, and even when I asked her in 2011, she could not even remember the drafting table (later she went through her old tax records to pinpoint the likely years Dad was doing this.

What I do know was that My father’s father was successful in the construction business, becoming I believe a Vice President of Baltimore Contractors, a company that among many other things, built Cole Field House at the University of Maryland. His parents sent my Dad to that University, but he struggled there, and ended up leaving after 3 years. I really don;t have a sense about what that was like for hime, but one can imagine dealing with the disappointment of parental expectations.

My Dad did as his father (and grandfather I believe) had done, he went to work as a bricklayer; he tried his hand at running a business, a gas station/garage. Sometime in this period, he enrolled in a school that for some reason I remember was in Chicago. The program was a certificate he finished in Construction Cost Estimation, and he went on to make that a career, ultimately with the Federal Department of Housing and Urban Development (I recently found some hand written charts of his used for calculations of things like concrete and rebar for the USF&G Building in downtown Baltimore, still the tallest building in the city).

But this table I found in the basement was the one he had used for doing his course work. I took it with me when I moved to Arizona in 1987, and have carried it in every move since then. In 2008, I decided to sand and re-stain it, posting a few photos of the process on flickr. 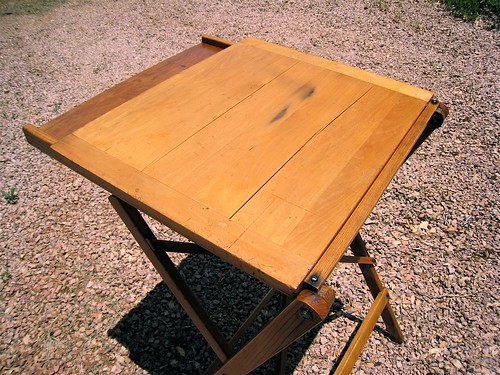 And someone found that creative commons license image useful for a Photoshop Tutorial article on how to make an image look like it was a blueprint draped over that old table.

But the real kicker came in October 2013, when someone emailed me asking to use that same image- he was an author of a research article due to be published in Cell, which I guess is a major Biology journal. He had created his own image (using that same tutorial, and it ended up being the cover image used on the December 2013 issue of Cell.

I found that to be Amazing. This today’s video.

But I still do not even know what school my Dad did this program at! The closest thing that matched was some info on a yelp entry for Coyne College described it as having a flourishing correspondence course program in the 1940s and 1950s. According to Wikipedia. It was known earlier as Coyne American Institute, and the list of programs in Wikipedia includes mostly electrical and HVAC programs. The University of Chicago also offered correspondence course too in this same time, but I am fairly sure the one that Dad did was a certificate, not a degree.

I then thought if I could track down some information about the table, I might found schools that made it part of their program. The old T-square that came with the table had the name DIETZGEN on it, and that company is still around and its history cites having made drafting tables in the past (plus I found a few of the same table on ebay identified as a Dietzgen).

Wikipedia had interesting info on the company founder

At the time Eugene was heavily influenced by his father, one of Karl Marx’s favorite philosophers on socialist theory. As a result, Eugene was very working-class conscious and provided his factory workers with many amenities not found in the mid 19th century. Some of these amenities include separate bathrooms for men and women, open windowsills with flowers decorating the air, and a general atmosphere of a healthy working community.

but it also mentioned that the second company building is now part of the Depaul University campus.. maybe that program was from Depaul? Now I am straw grasping.

I then wondered if I could find a newspaper archive for Chicago from the late 1940s / early 1950s, I might find some ads for this kind of school. Then I ran into paywalls… and decided I had gone as far as I could. For now.

So I will never have definitive info on my Dad’s experience as a distance learner, but I have about as good a one as I could have.

And I have his old table.

And my own story.

So what about you? Is it time I shake the tree again more more stories? The call is always open… Am I alone in finding these worth creating, collecting? Is anyone out there got an inclination? Just record a video, post online, and share. I will do the rest to get it on the site.