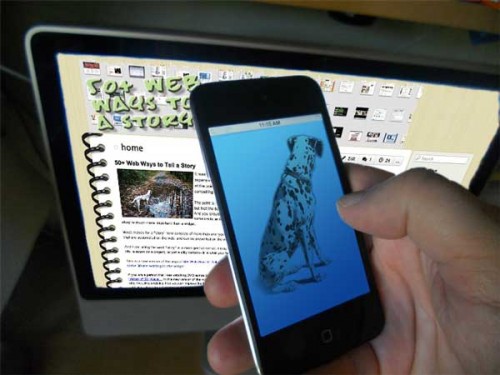 I can’t let the old project go. 50+ Web Ways to Tell a Story started as a workshop/presentation for some educators in Australia in 2007 (the first wiki still gets hit). The idea was to do more than list tools, but also to promote a sensible story making process, aimed at using +/- 50 free web tools that enabled the creation of a multimedia story.

Tools have come and gone. A long list remain to be added.

But now for something different, something I resisted for a while. It was not until I played with tool called Tapestry that felt like there was new potential here. It was fun to create a new version of Dominoe’s story. It was simple, elegant, and on the phone, the tap to reveal was a pleasant way to move through a story.

Ironically, it is not exactly the kind of thing I wanted to add. It is not an app for creating stories, but for viewing them (but it does have viewer apps for both iOS and Android). Tapestry stories are created on their Tapestry Workshop on the web. And while you can use the workshop in a mobile app via the web browser, I want to limit the new mobile tools to ones that are native and the ones that create content.

With my friend/colleague Darren Kuropatwa we are going to add a section of the site that looks at mobile (phone, tablet) apps that can be used to create stories. We talked about it for a while in August, but picked it up in earnest in December with weekly video chats and co-developing some new templates.

I want to talk loosely here about what we have planned, and what is in motion now, including a new community site. In a separate post, I will detail more of the under the hood stuff I have done in wikispaces (and thanks for the educational hosting no ad package!), as there is a lot I found you can do that most people never notice.

I resisted for a while. To me mobile apps seemed mostly about just the app, and doing stuff easy. It was not until I played with one called Tapestry and liked how it played back on the mobile device (we used it to prototype our template– .

One interesting aspect Darren and I have had some fun thinking is how he is going to tell my Dominoe story in the apps that he reviews. It’s one process to tell your story, but something different to tell someone else’s. But having seen the ones that he has already done, it is no issue at all.

One thing I will be doing is dropping the “2.0” in the name of the site (it’s gone from the header graphic). Web 2.0? Really? That is old. We also have co-developed a nifty construct for enabling people to share their examples via a system of embedded google forms and response sheets.

So far, we have 6 mobile apps reviewed 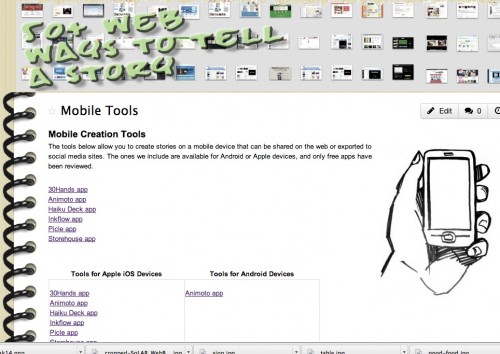 Not many but we are still working out some of the issues in having a common template.

The plan is to cover a representative number of iOS and Android apps. My original idea was to do ones that were only available on both platform, but that is unrealistic and left off a lot of apps. But the criteria we have now are:

Darren has a new Android device and will pick up that side of the house. We did find a few apps that were iOS but iPad only, so we are adding some tags to make those differences clear.

I have to say this is laborious. In creating a new Dominoe story, it is enough to figure out the features of the app; doing this and the writeup is 2 hours at best and sometimes 4 or more.

Another question is do the apps really leverage any unique benefits of the mobile as a platform? Do they produce content that is not readily done on a computer?

I did one early that is not a great tool- Picle (I had the app already). It was unreliable, and has not been updated in over a year. And really, what it produced was not all that special. But it counts. To make up for a less than stellar tool, I tried a different story approach– telling ti from Dominoe’s point of view.

The Animoto mobile app produces the kinds of videos the desktop version does. But it works on both platforms; the app was reliable, so it gets a decent nod.

In the area of something a little different, I liked the note taking/doodling app Inkflow. It can be a pure drawing app, but you can also import photos, and use formatted editable text. It creates something more like a scrapbook.

We are just getting going here, but we have a goal of running a free/open online event in March. I have a few Spring and Summer workshops where I hope to have people explore the apps. We set up a new Google+ Community as a place for people to gather. We absolutely need suggestions for more apps to include. But again, more than just another list of 100 top apps for _______ we want to focus on the storybuilding part. What works? how might mobiles be put to best use for this kind of storytelling?

I am really excited to be working with Darren on this. It changes the whole dynamic to have someone to bounce ideas off of. He brought the idea of embedding a google form to collect examples for each tool, and then embedded each form’s spreadsheet below so you can see the results: 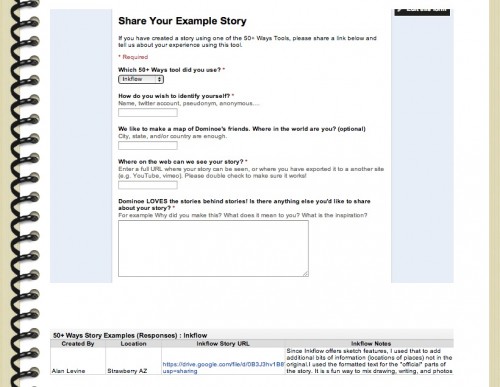 At first it looked like we would end up creating copies of the form, but with some fiddling and experimenting, I found a way we can do it with a single form. Each tool’s results are in a separate sheet (some trickery learning the FILTER function). And I found a way to preselect the tool from the drop down menu.

I hope some folks have some interest in this and can offer feedback. Or they can start trying the tools and making more examples to add to the site. There are a lot of gaps and holes to fill, and likely more bumps to iron out.

But its exciting to be pumping some new energy into the site. 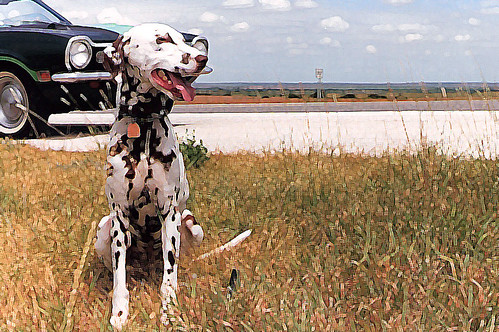 Oh Dominoe, you were so important to me, but I had no idea how much you would mean to me.