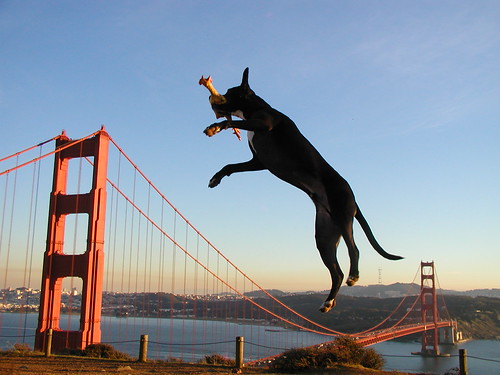 There’s is nothing like a successful, joyful leap. Mine today was accomplished within the space of my programming editor (still BBEdit, the same text editor I started my first web pages with in 1993).

I have to say one of my most favorite things made is pechaflickr which I usually described as a mashup of pecha kucha, Powerpoint Karaoke, and flickr. 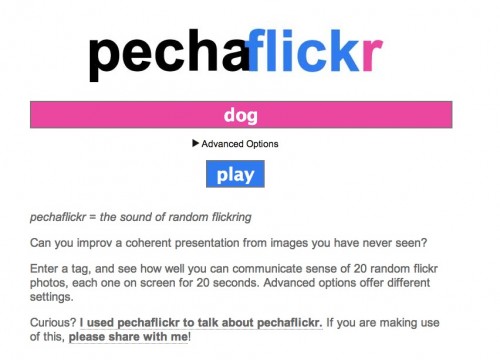 The way it works is you enter a tag to use as a source of flickr images; if you toggle open the advanced options, you can change the default number of images (20) and interval between (20 seconds). You can check the box that forces images to come from different people, so you don’t see a bunch of repeats from the same person.

The player opens in a new window, and after a splash screen as a warning 9with some taunting text), the images pop up one at a time. The idea is for people to practice improvising a talk or story to accompany the images.

One thing I had thought of adding, but never got around to it, was to keep a track of the images, so there would be a credits screen at the end. I was brainstorming today with Darren Kuropatwa about an upcoming workshop, and he had a great idea of a way to use pechaflickr– but it would be much more useful to have away to save the list of images.

Part if the holdup before was my own limited knowledge of jQuery– I use the Cycle plugin to run the slide show. With some more coding experience (not a whole lot more), I thought I could find a way to generate the list of links to images (done in php with the phpflickr library)– that is easy. It took a few iterations to figure out how to hide initially the div where the info was stored (CSS: visibility: hidden;), and when the slides were done, to hide the div that holds the images, and show the hidden credits.

So now, when the slides are done, you get the thumbnails (linked), and a list of URLs (linked) to all images that were in the show: 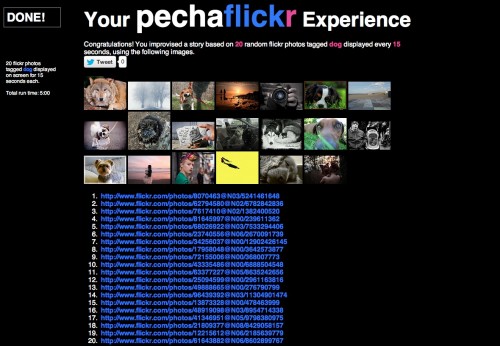 And for fun, I added a tweet button that includes a link that sets up pechaflickr with the same parameters, e.g. http://pechaflickr.cogdogblog.com/index.php?t=dog&s=15&i=20&u=1 (you won’t get the exact same images– that is the RANDOM part)

I used pechaflickr often in my storytelling presentations- it is a great way to start with an activity. I find that it is better when you get a group of volunteers, and ask them to take turns– the hand offs from one person to another are always fun to see. I’ve done this in Google Hangouts and for the online talks I do in Collaborate for Dean Shareski’s classes… I even did a talk on improv where I used pechaflickr to talk about pechaflickr.

I know language teachers use it for student practice; see what Amy Burvall shared 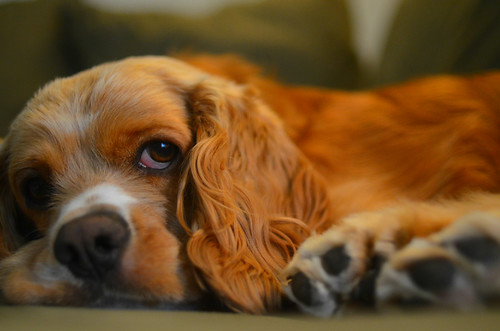 Like Winston, I feel pretty good right now (he is one of the many flickr images that will come up if you stay with my defaults).