Oh MOOCs, how I mock thee. It has been a while.

But now I am associated with this 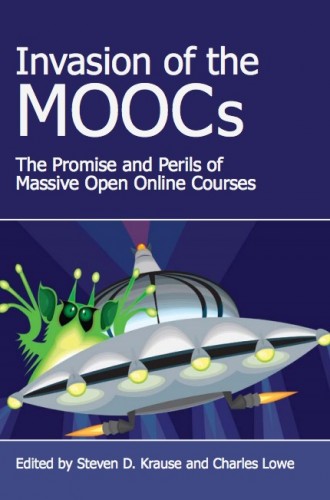 Invasion of the MOOCs: The Promises and Perils of Massive Open Online Courses has just been published by Parlor Press (and is available for free as a downloadable PDF).

Steve Krause and Charlie Lowe emailed me sometime Spring 2013 about their plan for the book, asking if I would contribute a chapter about ds106. I tried to resist, say no, but I was also looking for some more venues to pad the ole CV with some publications. But wait a minute, most of the authors are writing instructors, people who drop words like “rhetorical abstraction”, etc.

That and fix my elbow patches.

Where is my smoking jacket?

I was intrigued by their plan to rapid publish and also go with a publisher who would release the book under Creative Commons. But also I liked the process they set up, where the authors of chapters would give each other peer review.

My chapter, of course, what else, is about ds106. A MOOC or Not a MOOC: ds106 Questions the Form. And while I might have written it from blog posts (it is largely informed by what I blog here), I did write it as new, though the ideas have been bounced around before. Mainly how ds106 deviates or not from the parts of the acronym.

The opening I chose to give a nod to one of my favorite teachers, trying to get at a bit of the futility of trying to lump MOOCs into one pile to describe as a while:

My undergraduate and graduate studies were in Geology, a field rampant with classification schemes. The words of my petrology professor at the University of Delaware have always come to mind when we talk about categories of almost anything. “Doc” Allan Thompson said, “In the world of classifications, there are those who are lumpers and then those that are splitters.”

With a new classification term like “MOOC” we encounter conveniences and shortcomings by characterizing all examples that fall under that term. Even splitting them into cMOOC and xMOOC varieties produces generalizations that lose significance of what lies within, or between.

This paper includes my experiences at all levels with an open course that defies classification with the ongoing MOOC discussions.

I appreciate the excellent feedback from co-authors Laura Gibbs, writing a great critical feature review in “Coursera: Fifty Ways to Fix the Software (with apologies to Paul Simon)”, and Jeffrey Grabill who described the development process and ideas in “Why We Are Thinking About MOOC”.

Steven and Charlie did a ton of work to organize the effort, and ran it smoothly. Thanks for inviting me along. I do like the cover art; theirs and my hope was to use the one created by David Kernohan

which of course was a no go in publishing due to copyright of the original movie poster. Again, that tug of a 19th century past set of practices on a 21st century mode of creativity. Freaky Creaky.

So they did what makes sense; rather than be able to freely use a creative remix, go and license an existing drawing. I find it hard to see the creative differences, but there you go, some kind of bloop.

And you know, there is an aspect of invaders and a problem with the metaphor. The come in unexpectedly, cause havoc and change, and then move on. That’s what they do, right? That’s again what is different about ds106- it never ends, it is always reshaping, morphing, spinning off into new mutant varieties.

If MOOCs invade, they eventually go away.

Which brings me to an email from Cathy Davidson, the Future of Education blah blah blah mumbo jumbo chilly whack long wordy title full of colons, commas, and semi colons … ‘is now over’.

Again, I started a MOOC 6 weeks ago, and managed to make it through a week. That is my problem, my fault, not theirs.

And Cathy’s message does offer the invitation and ways one can continue on, mainly by becoming a member/needle of HASTAC. But the MOOC is over. Period.

But you know, the MOOC is Over.

The MOOC is Over.

Immediately I heard the lead organ riff of the Doors

It took only a few search and replaces to re-write the lyrics:

When The MOOC Is Over
by Cathy Morrison

The face in the mirror won’t stop
The girl in the window won’t drop
A feast of friends
“Revolution!” she cried
Waitin’ for me
Outside!

Come back, baby
Back into my course
We’re gettin’ tired of hangin’ around
Waitin’ around with our heads to the ground