I typically tell people the ds106 Daily Create is something that should take less than 20 minutes per day, hence today I spent maybe 2.5 hours on mine.

Today’s one was special though. I am visiting David Kernohan and Vivien Rolfe in Bristol, and David’s son Ben is a fan of the daily create. He is also 6. I offered to publish one Ben made up; his idea was to ask people to create a board game (as usually, the editor takes some liberty, so it became “Design and draw your own board game about ds106”).

It’s best often to go with your first association, and mine went to Monopoly; and therfeore I present the Gartner Hyped Game of MOOCopoly 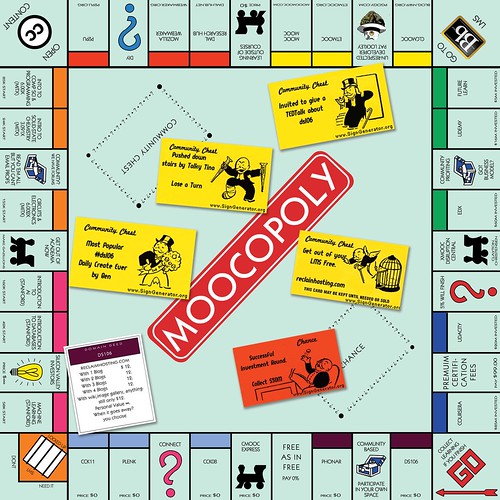 My original idea was to mock up an image, but as I started the google diving, I came across a Monopoly template in Photoshop, found within a 2008 blog post by Brad Frost. Yep, a self hosted blog strikes again.

This is quite the template; every element of text on the board is editable; and he even provides fonts. He apologizes a bit for much about how much is left out, but it is cleanly organized into folders within the layers palette, and was super easy to modify.

I did not have much of a concept, beyond I know I wanted “Go to Jail” corner to be “Go to the LMS”. I ended up making the bottom of the board the Connectivist MOOCs, ds106, phonar, and the original Canadian 3.

The left side of the board represents the university ones gone Xstyle; the three Stanford MOOCs from 2011, and the first 3 from EdX. Rather then prices, I listed, what I could find (honestly 1 number was made up), the numbers of initial registrants. I have to commend MIT for having extremely detailed documents on MITx.

After Free Parking changed to Open Content (easy), I was stumped on the top of the board. I went for the MOOCs and projects that were beyond courses, P2PU, MOzilla’s Webmaker, and the DML Research Hub, plus MOOCMOOC, CLCMOOC, and ETMOOC (there was many more that could be added). The bottom of each has an URL.

I spun again for Waterworks, and it was David and Viv’s idea to give a little nod to the amazing Pat Lockley who does stunning MOOC work but rarely gets recognition or keynotes.

And the right side are the Big Players- FutureLearn, Udemy, Edx, and Coursera.

The railroads ended up as themes for the sides.

That was not enough. Ben said I needed Chance cards. There was a template PSD in the package I downloaded, but it lacked graphics. But I remembered the Monopoly Chance/Community Chest card generator, which worked perfectly. We created maybe 5 (two were Ben’s)

And finally, the Brad Frost template also had one to generate any property card (it uses layers to toggle on and off the design colors). This we have a domain deed card, letting you know that you get a lot of value for $12 a domain at Reclaim Hosting This is clearly a case of getting carried away with a Daily Create. it is not what I recommend nor expect. But sometimes there is no stopping oneself.

There are four other game boards in the hopper; Ben has just gone to bed, and it would really make him smile to see a lot more in the morning. So go spend 20 minutes, or whatever you find suitable.

The full PSD file for MOOCopoloy is available (20 MB download) for remixing or printing to line bird cages.